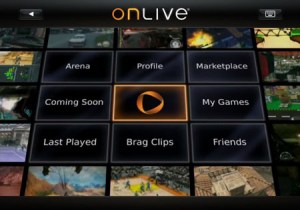 When OnLive hit the wall a year ago, pundits concluded that cloud gaming was a sham. The company flew high with a service that promised to disrupt traditional gaming by delivering games digitally from the cloud to players who had limited hardware that wouldn’t otherwise be able to run high-end PC games. The service debuted in 2010, but OnLive spent more money than it took in, and it never accumulated that many subscribers. It ran out of funding after raising a ton of money from big backers such as Warner Bros. and British Telecom. OnLive went through a change in ownership and survives as a smaller company, but it left quite a wake.

Now, the cloud is sweeping through lots of industries and changing them. Microsoft and Sony have embraced it and are using it to further their console ambitions. Sony bought Gaikai, an OnLive rival, for $380 million last year. And Microsoft has introduced the idea of cloud processing, where its 300,000 servers in the cloud will supplement your Xbox One’s hardware, processing game code to ease the burden on the local machine. And more recently, Big Fish Games, a maker of hundreds of casual games, decided to shut down its cloud-gaming service because it wasn’t on the path to profits.

That was a surprise because Big Fish Games didn’t have to stream a ton of game assets to its users since it operated slow-action casual games, not the fast-action titles of OnLive. So Big Fish Games’ cost couldn’t have been that high. Still, consumers didn’t flock to the $7-a-month subscription service for all-you-can-eat gaming.

“This decision reflects the reality that the costs to support streaming cloud delivery of premium games are too high, and the user adoption too low, for us to warrant continued investment,” said Paul Thelen, the chief executive of Seattle-based Big Fish Games.

In the meantime, it seems like the excitement in the game industry has moved in another direction. GungHo Entertainment is generating almost $5 million a day from its mobile title Puzzle & Dragons. Supercell raised $130 million on the strength of its Clash of Clans mobile game. Korean mobile-messaging network Kakao and Japan’s Line are starting to dominate the Google Play mobile game charts. If you were busy investing in cloud gaming instead of mobile gaming, you might have been riding the wrong bus. Cloud gaming has ambled onward, but the real investment returns in gaming have shifted.

A slower road to the future

What do all of these developments tell us about the future of cloud gaming?

I believe that the cloud revolution is still within the grasp of gaming companies. It can deliver huge efficiencies, broaden the reach of companies, and reduce their costs. The benefits in gaming are not unlike the benefits that the rest of the industries are enjoying. Those benefits are still there at the end, but, as some companies and investors have discovered, the road is bumpy. It has some huge, unexpected dips and twists. But it’s not a dead end.

I think that game companies that embrace the cloud have to be more creative now that the easiest strategies aren’t going to work. They have to proceed at a measured pace. They can’t assume that consumers are going to drop physical goods or traditional gaming habits altogether and start getting all of their game services from the cloud.  (Just look at the furor Microsoft ran into over its curtailment of used game sales and an always-connected Xbox One; Microsoft had to back off). They have to make sure that they don’t run out of gas on the way to cloud-gaming nirvana. But we need not despair. A slower road to the future can sometimes be good as everybody gets to think more along the way.

OnLive faltered in part because it was a little like Netflix, flooding the networks with streamed content in delivering entertainment into the home. OnLive had compression technology, but it wasn’t good enough to enable the delivery of the highest-quality game experience. The Internet in the U.S. is still too slow, and bandwidth hogs aren’t a great business. If someone could build a cloud-gaming service that didn’t consume a lot of Internet bandwidth and gave consumers something that they couldn’t get in any other way, then that is something that will take off. Cloud gaming on smart TVs, for instance, still makes a lot of sense.

There are a lot of companies applying the cloud to mobile. Unity Technologies is becoming a little like Amazon Web Services, providing everything a gaming company needs, including a newly minted cloud service. David Helgason, the chief executive of Unity, recently wrote, “I think we underestimated the speed by which chips would get better, in phones and tablets in particular. The devices we have in our pockets are plenty powerful enough to play the games. Most people are happy either with their mobile devices or they’re hardcore gamers already, and they have their consoles. There was probably a miscalculation of the evolution of bandwidth versus chips. The chips got faster more quickly than the bandwidth did.”

Justin Berenbaum, the vice president of business development at 505 Games, wrote, “It seems to me that full-on cloud gaming is going to happen for certain situations, certain game genres, certain types of games, on certain devices. For example, people who are not self-identified gamers on devices that are not really game-capable, like a low-end smart TV or a TV with a set-top box, could be good targets. They are people who will not spend extra money to get specialized game devices but still want to play games.”

Playcast in Israel is still around, testing its service. G-Cluster is out there as well in overseas markets, bringing cloud games to TVs and cutting deals with big game publishers such as Electronic Arts. Gordon Campbell’s Leonovus is one of the wild cards among startups that could enable distributed cloud processing. CiiNow is attacking the problem of server infrastructure costs. And Microsoft’s Xbox One will use the wisdom of the cloud and its Kinect sensors to figure out who is standing in front of it and set up the right gamer profile and preferences.

There are new ways to embrace the cloud without clogging up the networks, according to Osman Kent, the chief executive of Numecent, whose spinoff Approxy has enabled a Chinese online-games provider to deal with the rapid growth of its massively multiplayer online game. The company is expected to grow from 1.5 million simultaneous users now to more than 10 million by 2015. But instead of building a million new servers, the company will use Numecent’s cloudpaging technology instead to serve games to users without clogging up the networks, Kent said.

We’ll be talking to Kent and other experts about the cloud at our CloudBeat 2013 event next week. And then we’ll talk to the cloud-gaming companies themselves at Cloud Gaming USA, where I’ll moderate a couple of panels. By the time our own GamesBeat 2013 conference rolls around in late October, I hope to have a better understanding of Cloud Gaming 2.0, or 3.0, or whatever it is. I’m very interested to learn where cloud gaming is going. One thing is for sure. It’s not going to go away, like so many other fads in gaming.

The cloud adds a third dimension to a global chess game, which we have dubbed the Battle Royal. Sony may have outmaneuvered Microsoft in designing a more powerful next-generation game console, but Microsoft has more room to maneuver because of its huge Xbox Live service and its cloud infrastructure, which — as we can see in the example of cloud processing — can be used to make up for shortcomings in the box.

If I had to bet my money on which companies are going to get it right, I would pay attention to a handful that are already playing the chess game. Apple could very well use its might to create a better iOS console in the living room to challenge Sony, Microsoft, and Nintendo. Google could do the same. I’d be very interested in Nvidia, which has launched its GeForce Grid cloud-based gaming service built upon servers with its graphics processing units, and what it will do with subsequent generations of its Shield portable gaming device. But I’m also very keen on figuring out what Amazon, the ultimate cloud-services company, could do to extend its presence in cloud gaming. At some point, everybody is going to realize the cloud is a weapon. It is a battlefield. It could be the cause of revolution and disruption.