The Creative Assembly went all the way with Total War: Rome II. This ambitious game puts you in charge of the Roman Empire and lets you steer the epic story of its expansion from a tiny city-state to the conqueror of the known world. It makes you feel like you are making history.

In Total War real-time strategy games, you can see the battle from a bird’s-eye view. As a general, you march your armies across the terrain of the empire on a gorgeous 3D strategic map in turn-based gameplay. You can build cities, invest in infrastructure, and construct legions and naval fleets. When your armies meet in battle, the action zooms in on the battlefield, where you fight against another army in real-time.

You set up your formation and then let the army loose as the battle begins. The battlegrounds reflect the nature of the strategic terrain in great detail. If you’re besieging a city, you can roll battering rams and siege towers against the walls and gates. Your cavalry can hide in the forests and make a devastating charge against the enemy’s flank. If you do enough damage to morale, the enemy ranks will crumble and flee. All the while a battle narrator delivers the play-by-play. If you want, you can also zoom in on the battle on the individual soldier’s point of view, so you can see what is really happening to your soldiers. No other game gives you the sense of small-scale and large-scale warfare.

Add to that the intrigue of spies, diplomats, and rival commanders. The political side of the game can lead to game-winning alliances or civil war. The game is a little too ambitious in that it takes forever for some of the turns to execute. It can take a good chunk of computing power just to run the game.

But I love the idea of combining a Civilization-style strategy game with the action of real-time tactical warfare and the beauty of a first-person viewpoint of the battlefield. If Creative Assembly continues with this series, I hope they do something like combine the strategic warfare of Total War with the grizzly hand-to-hand combat of Ryse: Son of Rome. Now that would be a spectacle of a game.

When Lara Croft debuted in the origin Tomb Raider back in 1996,  she was already fearless, confident, gun-toting adventurer with a knack for navigating through dangerous tombs and solving ancient riddles. But over the years, gamers were getting tired of the same old Lara shooting her way through the same puzzle-like catacombs. With each new game in the franchise, Lara began to decline in popularity, despite the success of the Angelina Jolie movies.

Crystal Dynamics went back to the drawing board. The studio rebooted Lara and relaunched Tomb Raider earlier this year with the story of how Lara became an adventurer. It seemed like a desperate act of revival. But Crystal Dynamics pulled it off.

The opening scenes of new Tomb Raider were enthralling and emotional. Just about everything that can go wrong does go wrong for the 21-year-old explorer. She almost drowns in a shipwreck, is nearly cannibalized, and gets impaled on a nasty spike as she tries to escape. She emerges alone, bloodied and freezing, on an island full of nasty guardians of some horrific secret. Lara was re-created in beautiful, realistic 3D with more, umm, realistic physical proportions. The game captures the crucible moments that turned Lara from a weak and vulnerable person into a survivor.

The game had its flaws. Lara was a little too quick to learn the way of the gun. If Crystal Dynamics had maintained the tight, movie-like control and didn’t allow the video game side of the experience to completely take over in the latter stage of the game, it would have been a much more elevated experience. Like Nathan Drake in the Uncharted games, Lara becomes too much of a killing machine. And the final boss fight seemed a bit silly and repetitive.

But Crystal Dynamics accomplished its goal of reviving Lara Croft’s diminishing reputation in the eyes of gamers. The developers gave us a visual feast and showed us how Lara the girl became Lara the legend. As a fully flushed out character, and not just another female with big boobs in a video game, she’s more of a video game icon in my eyes than she ever was. 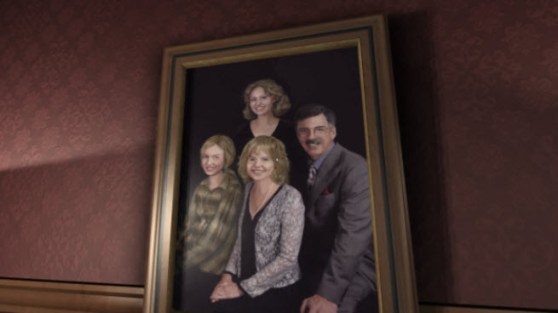 Above: Gone Home was a surprise indie hit.

Gone Home is another pleasant surprise from an indie startup. It comes from a little Portland, Ore.-based company that was started in March 2012 by Steve Gaynor, Johnnemann Nordhagen, and Karla Zimonja. They took a step back to a genre that game publishers had left behind long ago. They created a simple exploration game akin to The Seventh Guest, where you explore a house and unravel a mystery.

The adventure starts as a college student named Kaitlin (Katie) Greenbriar returns home after a year abroad in Europe. She finds a cryptic note on the door and that her family has vanished. You play Katie, exploring the house and learning its secrets. You find out what happened to your family bit by bit, as the characters leave behind clues in the form of diaries, receipts, files locked away in safes, and other pieces of physical evidence.

It’s refreshing to be able to immerse yourself in a game where your goal is uncovering a mystery without violence. That’s what Gone Home is. It seems awfully primitive, like the old text adventures. But it is executed so well that the dramatic effect is outstanding. You don’t see characters acting out scenes on stage like in movies or other games. But the title is more like Myst, where the action takes place in the past. And the developers enhance the drama that you feel by taking full advantage of sound effects, darkness, mood music, and hidden clues.

It’s not a predictable horror game, but the story will keep you scared and enthralled at the same time. The story has some twists that will surprise you as well as some dead ends that will distract you. I almost wish that the game developers had united the different story threads, but Gone Home is a great storytelling accomplishment that also manages to be an entertaining game. It would be sad to overlook it in a year full of big games. 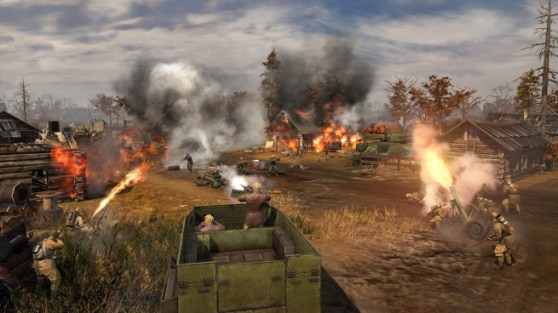 Above: Tank battle in Company of Heroes 2

Sega did much to warm up the frozen real-time strategy market on the PC with this sequel to the top-selling 2006 release of Company of Heroes. The title shifted the action from the Western Front to the Eastern Front of World War II, adding the effects of the bone-chilling Russian winters to the battlefield.

The title combined realistic strategy and tactics with beautiful 3D graphics and environmental effects, such as frozen rivers where the ice could crack under the weight of big tanks.

And while World War II is often known as “The Good War,” it also shows the brutality of both sides in the combat, as the story follows the career of a patriotic soldier of the Soviet Union who is promoted on the battlefield as he sacrifices the lives of his troops in order to attain strategic objectives. The story zeroes in on the choices officers had to make as they either had to obey the orders to sacrifice comrades or face the firing squad.

At some point, the battle devolves into pure chaos. You can no longer control the action and your soldiers refuse to fight if they’re pinned down or demoralized. Once you commit your troops, you can change the balance of a firefight if you throw more troops into a flank assault or use your aerial or artillery assets. Concentrated firepower works best.

The game also came with Theater of War missions for cooperative single-player play that served as a bridge to the kinds of battles you fight in multiplayer.

I sure hope the game sold well enough to justify future versions of this genre. Because nobody is building a war game experience with this kind of quality, except for Sega’s Creative Assembly studio, the maker of Total War: Rome II. 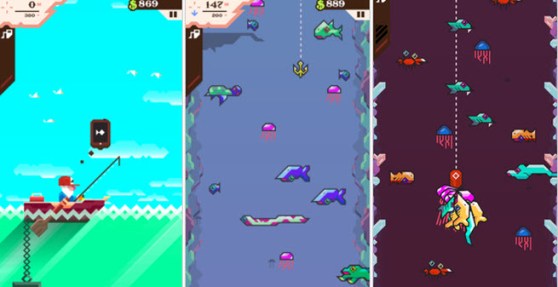 Ridiculous Fishing is a mindless escape with clever gameplay designed for a smartphone or tablet. You drop a hook into the ocean and then tilt your device so you can evade fish on the way down. Then, on the way up, you swing the device back and forth to try to hook as many fish as possible. Once you pull them to the surface, you shoot them with shotguns or machine guns. The latter part is what you wouldn’t expect in a casual fishing game, and it’s one of the things that makes the title of the game so apt. It takes about 30 seconds to play a round.

You can shop for better items that let you fish deeper or faster. It’s hard to stop playing because you keep trying to top your own score and get some better fishing gear. As you get better stuff, you can go deeper into the water and hook bigger fish. You may find yourself playing round after round for a half hour or more. It’s an endless game in that respect. The violence is pretty cartoon-like. I had a nice time bonding with my eight-year-old nephew. We dueled each other by seeing who could bring in the most money from a catch. It’s simple, but not simplistic, as the game is very hard to master.

Let’s hear it for a title that brought back the feeling of joy associated with playing a mindless arcade game. It is zany and original in a way that so many games aren’t these days. And it is fine-tuned for the touchscreen device with an accelerometer for detecting motion.

Other games I enjoyed this year included Plants vs Zombies 2, Splinter Cell: Blacklist, Fieldrunners 2, World of Warplanes, Battlefield 4, Call of Duty: Ghosts, The Stanley Parable, and Ryse: Son of Rome. They didn’t quite make the list, but they gave me hours of enjoyment.

Take our poll about your own favorite game leave a comment explaining your choices. Thanks for reading this year too.