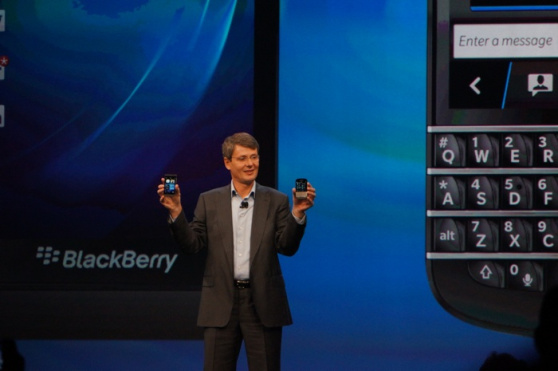 Making games for the BlackBerry makes a little sense, but it’s more of a diversion, not a long-term occupation. If you’re doing it, you have to ask why. Do you have nothing better to do with your time?

That is not a disrespectful question, but a practical one. Opportunity cost is a hurdle for BlackBerry. It has to convince developers that making games for its platform will pay off, when they can make more money developing for other platforms. It’s a hard sell, but BlackBerry, formerly known as Research in Motion, is doing what it can.

Yesterday, the company debuted its new BlackBerry 10 phones and apps in an attempt to save the business. For the most part, observers say that the new stuff doesn’t suck, which is a prerequisite for game developers to pay attention. BlackBerry’s curse has been the status quo of loyal users who don’t mind using a BlackBerry, even though more interesting smartphones and tablets are available. BlackBerry’s business has seemed doomed ever since Apple debuted the iPhone in 2007 and consumers began to favor touchscreens over BlackBerry keyboards. But BlackBerry fans didn’t see to notice, and 18 million of them are still out there.

BlackBerry has come out swinging with its own touchscreen mobile devices now (the Z10) and a faster operating system. But it seems terribly late. After all, Microsoft has been trying for months to steal away the developers and consumers who aren’t already in the Android or Apple camps.

The new devices are compatible with past BlackBerry apps, so 70,000 are already apps available. That sounds like a lot, but Apple has 10 times more apps. To bolster its app store, the Canadian company has turned to game companies in an attempt to bring in new audiences beyond the core demographic of executives who check their emails. That makes sense. If you look at Google Play, about 95 percent of revenues generated by apps in South Korea come from games. In the U.S., the percentage is 76 percent, according to market analyst firm App Annie.

Gameloft and Electronic Arts’ mobile division have said they will support the platform with games. EA is putting eight games on the BlackBerry 10, including Plants vs. Zombies and The Sims FreePlay, while Gameloft is publishing 11 games, including Six Guns and Modern Combat 4: Zero Hour.

Sam Shperling, a senior account manager for BlackBerry at Gameloft, told me in an interview that his teams have worked with BlackBerry for years making Java games.

“They still have a huge and loyal customer base who could migrate to the BlackBerry 10,” he said. “We think this is a great opportunity to show those users there is a new frontier for BlackBerry.”

But the Gameloft guys never met a game platform they didn’t like. It has a huge mobile game businesses already and teams that are able to quickly adapt games to run on any platform. Doing the extra work to port to BlackBerry 10 isn’t that difficult for it. Gameloft is also more experimental in nature. Because it benefits from the spread of new platforms, it’s more willing to expand to the new platforms. So it’s doing games for Microsoft’s platforms at the same time it’s doing games for BlackBerry.

If you think about how the big game publishers are willing to take risks while the little ones aren’t, it makes sense. If your games are on 10 platforms, adding No. 11 isn’t so hard. But if you are a small indie game developer only has the staff and money to adapt to maybe three platforms, BlackBerry isn’t on your list. Sure, it has 18 million users, but that is actually a small number in the overall mobile market.

Other game supporters include Disney, Sega, Rovio (the publisher of Angry Birds), Fishlabs, Funkoi, Halfbrick, JoyBits, Square One Games, and ZeptoLab. But if you really wanted to play games from these companies, wouldn’t you really want to do it on the 10 platforms that are already out there? The presence of these companies and their me-too games will not help BlackBerry sell any new devices. What BlackBerry needs is some content that nobody else has.

BlackBerry is also enticing indie developers by offering them $100 per approved application. Cash bribes could actually work with developers who are starting out and currently don’t have any apps out. For these developers, making money on the BlackBerry could finance efforts on bigger platforms. The problem here is that BlackBerry has no idea if it is getting shovelware or quality stuff from these developers.

The new BlackBerry models, the Z10 and the Q10, don’t suck, according to VentureBeat’s Devindra Hardawar. The Z10 has a 4.2-inch touchscreen with 720p resolution. The Q10 has a 3.1-inch screen with a keyboard. The technology isn’t bad, with a dual-core 1.5 GHz processor, 2GB of main memory, and 16GB of storage.

But the devices seem terribly late. Will they devices go the way of the ill-fated BlackBerry PlayBook tablet, which debuted in the spring 2011 and sold maybe 2 million units by the end of last year. That’s a horrible record compared to the sales of competitors. Against the iPad and Android tablets, this device had no chance. Gameloft’s Shperling said that the PlayBook was a first step where the company got its feet wet making and recruiting apps.

“I think what matters here is that there is another alternative platform out there that developers can go to,” Shperling said.

BlackBerry has a chance for survival if consumers decide they don’t need these extra choices the other guys offer. Perhaps the only way that it could survive is if it provides enough of the basics to cover the field. If consumers only want about 70,000 apps and BlackBerry delivers the right ones, then it could survive. And BlackBerry can always hope to strike gold, seeding enough money to hungry developers who might come up with some exclusive content that could give people a reason to buy a BlackBerry.

But that’s going to be so hard to do. Lots of platforms are spreading money around, and they may very well have more users than BlackBerry does. Developers who make games for a small platform face that opportunity cost. BlackBerry, at least, has made it easy to adapt game. Shperling said there is still some risk to what it’s doing. For a company with Gameloft’s resources, making games for the BlackBerry is an acceptable risk. But if you’re betting the company on making games for the BlackBerry, don’t do it.