Some wags will tell you that the Electronic Entertainment Expo (E3), the big game trade show in Los Angeles in mid-June, is on its way down. They will make you worry about big companies pulling out of the show, mobile companies failing to show up, and fans making it too crowded for the 50,000 or so professionals who will descend on the Los Angeles Convention Center in a couple of weeks. They’ll say that E3 is dead.

Don’t believe them. I’ve been going to E3 shows for a couple of decades, and a lot fear, uncertainty, and doubt (FUD) always precede each show. I have spread some of that FUD myself, as I’ve been worried that big companies pulling out would cave in the show and make it collapse. Electronic Arts is the biggest sinner here, holding a fan event on June 10 but skipping out on a booth on the show floor. And, horror of horrors, Rockstar Games pushed back the release of Red Dead Redemption from this fall to 2018.

But I’m happy to say that the game industry is broader and deeper than one company or one game. I predict that E3 2017 will be full of fun, with lots of new games, surprises, and evidence of growth.

First, consider gaming at the high level. Thanks to mobile, we now have 2.6 billion gamers on the planet, up from 100 million in 1995. This fact is so momentous, internet seer Mary Meeker included dozens of slides on games in her recent talk at the Code conference. The industry generated more than $100 billion in revenue last year, and, as noted in a report by Atomico, the top 50 public game companies have a market valuation of $500 billion. The Entertainment Software Association (ESA), which puts on E3, notes that 63 percent of American homes have at least one gamer. The average player is 35 years old, and 31 percent of players are women. In mobile games, the percentage flips so that 62 percent of players are women, according to Chartboost. 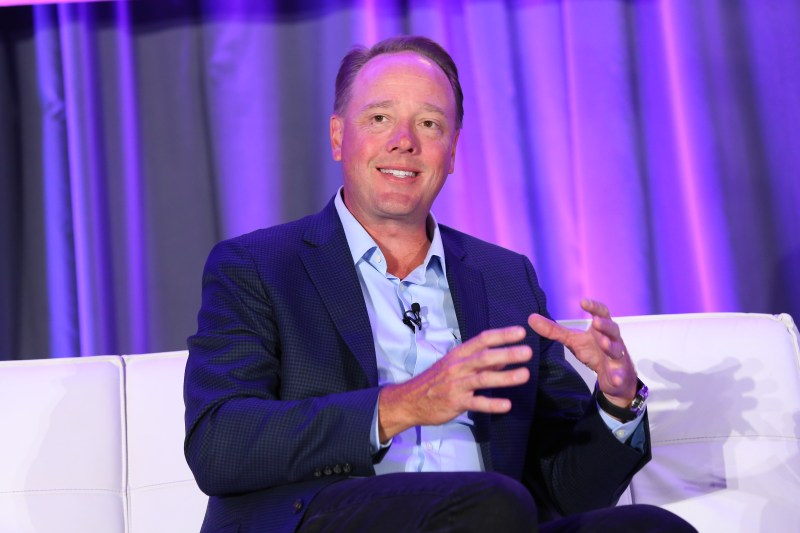 Above: Mike Gallagher, CEO of the Entertainment Software Association

Mike Gallagher, CEO of the ESA, is the top cheerleader for games. He is paid to be happy about games and to be cheerful about E3. But I have to say I agree with him this year, based on what I’ve seen behind the scenes at game companies and from what Gallagher has told me.

Last year, 50,300 professionals attended the show. A similar amount should show this year. Tickets are sold out. Press events start on June 10, but the expo floor is open from June 13 to June 15.

A year ago, about 20,000 fans went to nearby events. This year, 15,000 fans have tickets to get inside for the first time. It’s going to feel a lot more crowded in the halls. And those fans should count, as they’re going to tweet and livestream, and do their best to create a billion impressions from E3. Despite the travel ban and the distractions about war and terrorism and climate change, people still care about games. Games are the opium of the people.

E3 will have 2,300 products on display, with at least 75 that have never been seen before. 81 new companies are showing up. 126 of the exhibitors are virtual reality companies, up from 53 last year (even though Facebook’s Oculus doesn’t have a booth). More than 100 mobile and social companies are coming. And while EA vacated its booth for the second year in a row, Activision has returned with a big space for its Call of Duty: WWII and Destiny 2 games.

EA will lead the event schedule, starting on June 10 with an event in Hollywood where it will show Star Wars Battlefront II, updates to its EA Sports titles, and a new installment of the Need for Speed racing game. And I suspect it will show more. Warner Bros. will demo the impressive Shadow of War, which, after a delay of a couple of months, will debut on the PC and consoles in October. 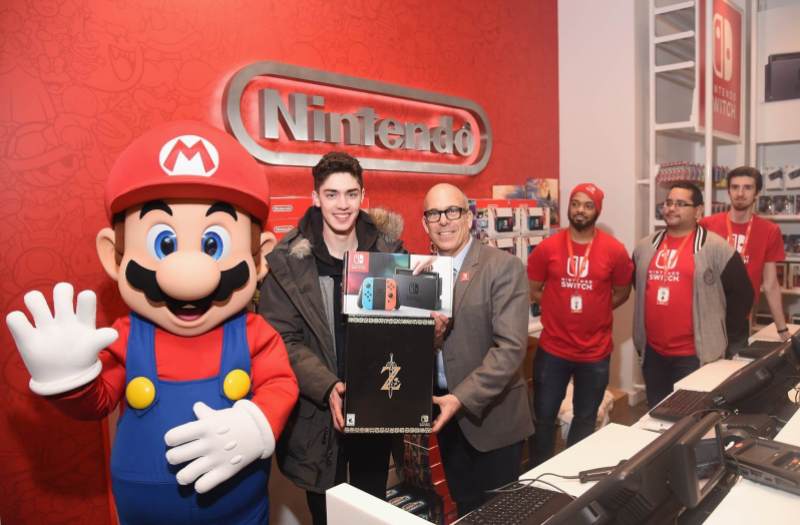 Above: Nintendo Switch launch at the Nintendo Store in New York City.

Nintendo doesn’t have a live press conference (it has a streamed event instead), but its hot-selling Switch console has reinvigorated the console industry. And it will show some cool games like Splatoon 2, ARMS (which I highly recommend), and its Super Mario Odyssey. That’s going to provide more entertainment than last year’s booth, which was focused only on The Legend of Zelda: Breath of the Wild (a fine game, but a bit overdone when it consumed an entire booth). I hope that Nintendo will drop a few more bombs to get us excited about the next year of Switch games. Nintendo will also show it is hip to the esports trend with tournaments for Splatoon 2 and ARMS.

Sony is going to show up with some games from last year that didn’t ship, like Days Gone and Detroit: Become Human. And you can bet it will show some outstanding games, like maybe The Last of Us Part II. We should also hear more about Gran Turismo, God of War, and Spider-Man. Ubisoft will show a new Assassin’s Creed, Fractured But Whole, and Far Cry 5 (which looks like it’s really going to hit home for Americans). Ubisoft hinted in a video that CEO Yves Guillemot will announce a new intellectual property. You can always count on Ubisoft to experiment with new game brands, as that is the way for the industry to renew itself. 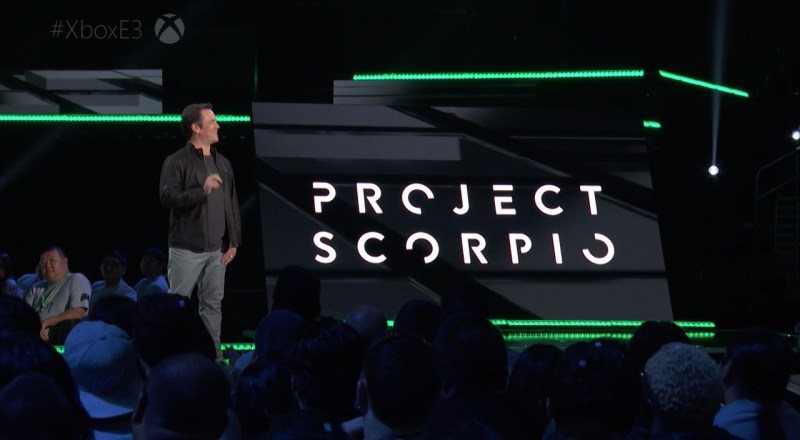 Above: Phil Spencer at E3 2016 talking about the Scorpio.

Microsoft will also inject a lot of life into the game industry with Scorpio, the new console that will have three times the processing power of the Xbox One. Microsoft is overdue to ship or talk about titles that it mentioned a year ago, such as Sea of Thieves, Crackdown 3, and State of Decay. Bethesda hasn’t shown its cards yet, but it has also scheduled a big event for June 11. One of the big questions is how aggressively Microsoft will push the virtual reality headset to go with Scorpio.

The PC will get some love as well with the PC Gaming Show. Intel, Advanced Micro Devices and Nvidia are all pushing the platform forward with new hardware that will keep it at the forefront of innovation and performance. On the VR front, I believe that Ready At Dawn’s Lone Echo is going to be a fun multiplayer game, combining Ender’s Game and Tron.

I’m going to have a lot of fun at E3 this year. And we’re going to do our third take on picking the best games based on the Unreal Engine, in a partnership with Epic Games. Our whole team will be there and will help figure out the winners of the Unreal E3 Awards, which go to the most creative, beautiful, and fun games. I invite you to sit back and enjoy the ride. I’m looking forward to getting hands-on with Call of Duty: WWII. And we will see a couple of games that I can’t talk about yet. So I’m not worried. E3 will be okay. 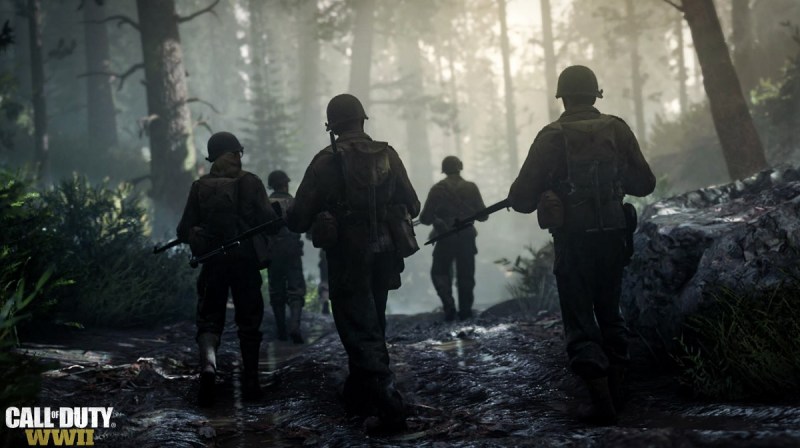