Bethesda Softworks’ Fallout Shelter is one of the rare hardcore gaming hits on mobile devices. The post-apocalyptic game scored huge publicity when Bethesda announced its availability during its Electronic Entertainment Expo (E3) event in June. Bethesda told fans they had to wait for the Fallout 4 console game until this fall, but the post-apocalyptic mobile game was available to sate the franchise’s fans immediately. The result was a downloading frenzy.

The title is still doing good on the mobile charts, and that’s why it’s worth a deeper look. I’m still waiting for my interview with the developers and publishers. But in the meantime, I’ve got own observations about this title, which I’ve been playing religiously for a few weeks. In fact, I stopped playing five other mobile games because I was so enthralled with Fallout Shelter. Dissecting why this game took off on mobile when so many other hardcore titles have failed yields a lot of lessons for those in the $30 billion mobile industry.

In the game, you start out by becoming the manager of a Vault, a fallout shelter where survivors of the nuclear holocaust can gather and build an underground community. Like the Tiny Tower game it is modeled after, Fallout Shelter is a building and resource management game, where you have to carefully add rooms to your shelter and put people to work inside it. You can level up the rooms and level up the dwellers. You can send adventurers out into the wastelands to collect special items, weapons, and resources. Every now and then, you may be attacked, which is something that doesn’t happen in Tiny Tower.

The game has a look and feel that matches the well-known Fallout brand that millions already love. They’ve been waiting for years for a new Fallout title, and the pent-up demand is huge. This title has the same comical 1950s humor of the Fallout games. Fans have shown they are loving their first taste of a mobile Fallout experience. And they’ve shown they’re willing to pay for things. 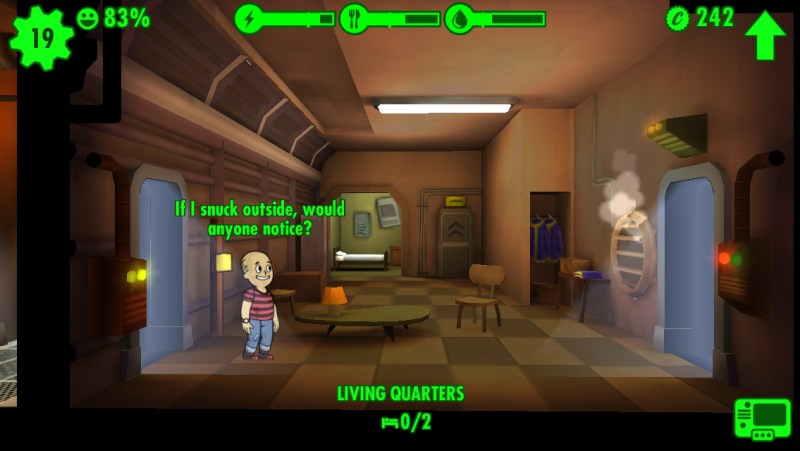 Above: Kids can wander freely around the shelter without working.

In the title, you collect bottle caps as a currency for normal daily activities. You can also occasionally earn valuable “lunch boxes” by achieving random goals. Each lunch box has gifts for you, including a guaranteed rare item, such as a machine gun that can come in very useful against the Raiders who barge in your Vault door. You can also buy lunch boxes with real money. Those lunch boxes can equip you with the resources and items that you need for survival, and which would take very long to collect without paying.

I haven’t seen Bethesda spend much money on user acquisition ads yet. But it probably doesn’t have to since it got some awesome exposure at E3, when millions were tuning into news about games. Fallout Shelter appears to be adding new users at a pretty good clip, allowing it to keep up with some heavily advertised games, according to market analyst firm Think Gaming.

During the week of E3, the title moved to No. 3 on the top-grossing list, according to market researcher App Annie. It edged out King’s Candy Crush Saga for a short time. That was sweet revenge for the hardcore fans who have been taking pot shots at casual mobile games because they aren’t “real games.”

Beating Candy Crush Saga, even for a day, was stunning, since game publisher King reported that the game generated $229.5 million in the first quarter, or $2.55 million a day. Superdata Research estimates that Fallout Shelter generated $5.1 million in its first two weeks, even though it is only available on iOS. When the time comes to invest in user acquisition, Bethesda may be able to afford it.

But Bethesda still has a lot of hurdles to overcome. Fallout Shelter has since fallen to No. 39. There are some reasons why it may not last, and it would be very wise of Bethesda to start taking advantage of lessons that the free-to-play game companies have already learned. In fact, I heard one mobile gaming executive explain why Fallout Shelter is doomed to fall off the list. 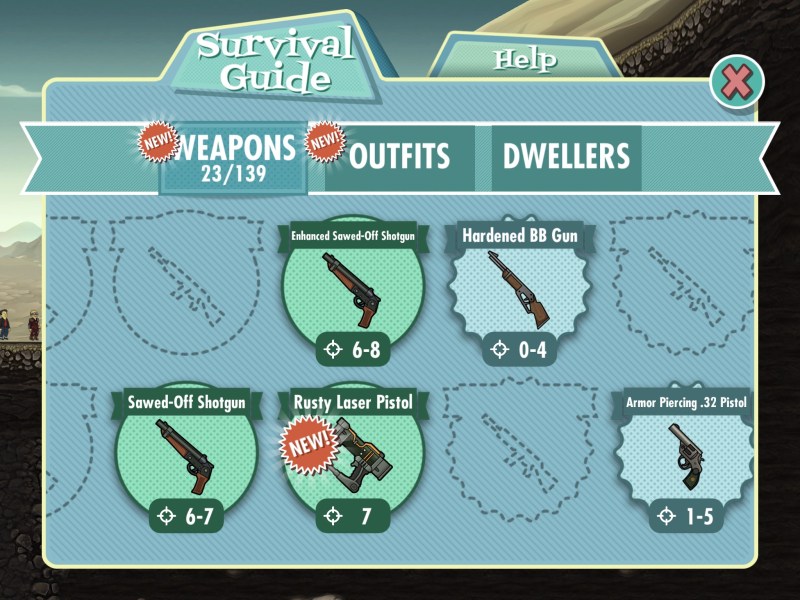 Above: It pays to read the help section, and sell off excess weapons and outfits.

In some ways, the addictiveness of the game is a limitation. My 12-year-old liked the game, but she had to quit because she didn’t have time to play. As mentioned, I quit playing other games because Fallout Shelter was so time consuming that I didn’t have time to spare anymore. I was pouring every free minute into tapping the bright green icons that indicated that I had resources to collect. If you don’t generate enough water, electricity, or food, then the happiness of your shelter dwellers starts to fall, they get radiation sickness, and they become vulnerable to attack.

The tuning of the game’s balance makes it really difficult, and I think that is key to how addictive it can be. My key indicators are always in the red zone and my people are usually unhappy. I have to keep paying attention to them and I have to keep building stuff in order to try to make them happier. You can put dwellers together, and they have babies. Or you can entice outsiders from the wastelands to come settle in your Vault.

You can level up your dwellers’ skills by focusing on traits such as Strength, Perception, Endurance, Charisma, Intelligence, Agility, and Luck. This kind of tuning and the deep leveling on multiple levels makes it more like a real role-playing game. If you feel lucky, you can accelerate growth, but you run the risk of having catastrophic disasters such as fires.

Todd Howard, designer of Fallout 4 and a veteran RPG creator, is credited as the game director on Fallout Shelter. There are 36 people from Bethesda who are also credited with working on the game and so are another 82 people from developer Behaviour Interactive (Behaviour notes that less than 30 worked on the title). That’s a huge number of people, and I’ll assume that it really didn’t take that many people to build this.

But there’s no doubt it’s a serious effort, and it’s not just a companion game meant to promote Fallout 4. When you think of the investment that has gone into Fallout Shelter, it’s no surprise it has resonated with players. And it means that the company really has to generate a lot of revenue to justify the effort.

It is doing a good job raising awareness for Fallout 4, no doubt. But it’s also fun as a stand-alone title, and Bethesda has every opportunity to make a pile of money from Fallout Shelter alone. In fact, it’s a tantalizing thought that Fallout Shelter might even have a chance to make more money than the console game Fallout 4.

Above: Raiders will attack your shelter and drain off resources. Send your best armed dwellers against them.

The question that we don’t know the answer to yet is whether there’s a ton of content waiting in the wings for the mobile game, or if it will be a flash in the pan that disappears when people run through the content. In contrast to many free-to-play titles, this game isn’t yet an ongoing service, and there isn’t much new stuff yet despite its success.

I felt there were features in the game that are acceptable in hardcore games, but that are not acceptable in free-to-play games. It is, for instance, a huge game with more than 100 megabytes of data to download. That won’t fly in many territories around the world where there are severe limitations or costs for mobile data.

Another problem is more subtle. If you play the game nonstop, you get attacked more often. Rad roaches can burrow into a room and kill your dwellers with radiation. You can stamp them out quickly or shoot the roaches with guns, putting a stop to the infestation. But if the roaches start spreading to other rooms, they can cause mass destruction. I didn’t notice one rad roach invasion until it spread. I lost 38 of 43 dwellers, even though all of them had guns. I’ve been playing two different shelters, one on my iPhone with 94 dwellers, and I have another Vault on an iPad 2 with 74 dwellers (many of them now dead from a rad roach attack last night).

The idea that you can lose all of your dwellers in one fell swoop is frightening. When I lost all the troops in one of my cities in Kabam’s The Hobbit: Kingdoms of Middle-earth during one battle, I considered quitting the game. I had sunk years into that game, and to lose it all in a split second was extremely demotivating. This kind of risk happens regularly in Fallout Shelter. That makes it more fun as a hardcore game, but it is a big turn off too. It gives people a reason to quit playing the game. It’s a killer for retention.

I showed my shelter to Jeff Scott, editor and publisher at Slide to Play. He promptly showed me that his shelter had 200 dwellers, or the maximum number possible. But that exposes one of the game’s limitations. Since Scott hit 200, he had no more motivation to play or keep growing. He also noticed that when you send a dweller out to explore the wastelands, the messages that come back from the dweller’s logs are amusing — for a time. After a while, they start to get repetitive. Running out of content is a no-no, especially in territories like China where players can zoom through a month’s content in a couple of days, said Jeff Hilbert, co-CEO of game talent management firm DDM.

Add to that some other “mistakes,” as free-to-play developers would see it. Since the game is so sizable, it has long load times, and it burns through the battery on your iPhone.

It’s also a single-player game with no multiplayer, and so the opportunities for social sharing are limited. It would be very helpful if Bethesda launches a multiplayer version at some point. Sharing and social activity would go up. Bethesda released an update that allows you to snap a photo of your Vault and share it. An Android version is coming soon. All of these things could have been ready, or at least on the roadmap, at launch. 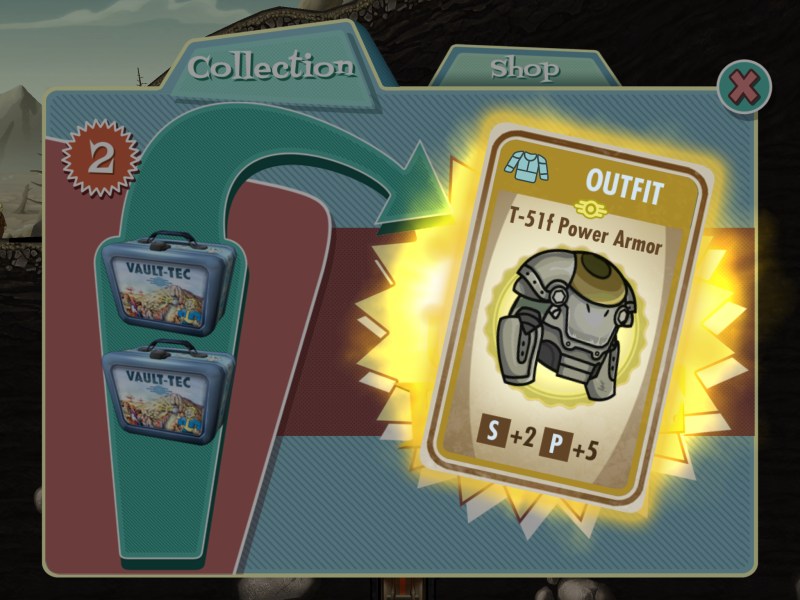