The #Gamergate controversy began in August 2014, when a former boyfriend of game developer Zoë Quinn shared a long post about their relationship, one that included a description of an affair she allegedly had with a video game journalist. The false accusation that she traded sex for favorable game coverage spread far and wide on the Internet, and it stirred up a long period of harassment against her, including “doxing,” or publicly sharing her address, phone number, and other private documents, as well as death threats and rape threats.

It might have ended there, as it seemed like nothing more than an outburst from a relationship gone wrong. But the Internet hate mob latched onto it. It escalated into a culture war about what games are and who plays them — even if it was built on a lie — and it created downstream effects for the entire game industry. Quinn briefly brought it all back into the news this week as she announced that she had withdrawn her harassment case against developer Eron Gjoni after “a really, really long two years.” 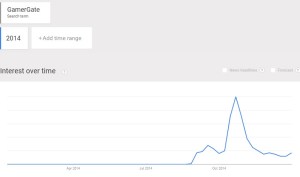 Above: GamerGate controversy on Google Trends since 2014.

Quinn wrote, “Trying to get the law to protect me has only continually put me in harm’s way. Why, then, would I ever want to sign up for more years of my life spent flying back to Boston, a place where it’s not safe for me to be, to continue another chapter in this nightmare? Why would I want to keep digging at a giant scar?”

That was a sad message that put an end to a legal case in one of gaming’s sorriest episodes. Some criticized Quinn for giving up. But you can’t argue with Quinn for being so tired of the fight and the constant drumbeat of misogyny.

“She deserves to move on with her life,” said a high-ranking woman in the game industry in a conversation with me last night.

I am really hoping that we are done with the exhausting anger of #Gamergate. On Google Trends, it has pretty much passed its peak and died down.

But I can also see that we will experience aftereffects for years to come. I hope that we learned something from it and were inspired to change the world in some positive way. I know that it made a lasting impression on me, prompting me to write more often about the issue of diversity in the game and tech industries. Last fall, I announced during an introductory speech at our GamesBeat 2015 conference that I could not recommend that my daughters go into the game industry, given the way that it and a segment of its consumers were currently treating women and underrepresented minorities. Some people took that as a wake-up call that we really have to do something to make women and underrepresented minorities feel more welcome in the industry.

We know there was a destructive wave from #Gamergate. The Internet hate swept beyond Quinn to engulf feminist game critic Anita Sarkeesian and game developer Brianna Wu. The Internet mob adopted the hashtag #GamerGate, reminiscent of the Watergate scandal and a reference to the charge of shabby journalistic ethics. Protected by anonymity, the misogynists in gaming came out in force against women and others who were labeled “social justice warriors,” or SJWs. The women who spoke out against #GamerGate were threatened with physical violence in the name of free speech.

In October 2014, at the peak of the #Gamergate news cycle, Intel stuck its foot in its mouth. Caving in to pressures from #GamerGate supporters, it withdrew advertising from the game developer-focused publication Gamasutra, which had a female game critic who had taken a pro-feminist position on gender representation in gaming. Almost immediately, the company realized its mistake and apologized, as it unwittingly gave legitimacy to #Gamergate supporters. This was the absolute bottom.

About that time, after a long silence, I got off the fence and weighed in with my own view that “enough is enough” on the harassment. My colleague, GamesBeat managing editor Jason Wilson, labeled #Gamergate as a new McCarthyism. I detected that a lot of people were afraid to speak out against #Gamergate because they saw what happened to its victims. I heard from a lot of #Gamergaters who believed they were being maligned and that they didn’t support harassment. The silence was deafening, and the feminist advocates felt abandoned, like the industry was leaving them to fend for themselves against the haters. Some developers condemned harassment but held back from mentioning #GamerGate.

Shortly afterward, I asked Intel chief executive Brian Krzanich what they would do to make amends, and he told me that they were going to be thoughtful about it. In a keynote speech at the Consumer Electronics Show in January 2015, he showed what he meant. He announced the company would spend $300 million on a new “diversity in technology” initiative, and that Intel’s U.S. workforce would fully represent women and under-represented minorities by 2020. That was true leadership, and it went a long way toward turning the tables on the haters. Intel is, after all, the world’s largest chip maker and one of the biggest tech companies in Silicon Valley and the world.

Intel said it would team up with a number of groups, including the International Game Developers Association, to push to double the number of women in gaming. And the push also went far beyond gaming into all of tech, as Krzanich said he wanted to set the example for all other companies to follow. Intel followed that in June 2015 with a $125 million diversity fund to invest in women and minority-owned startups. At CES 2016, Intel’s Krzanich said that 43 percent of new hires were women and underrepresented minorities, and he started a new group to combat online harassment, which he acknowledged he was a personal victim of. Intel has taken giant steps forward, but it has not been joined by as many game companies or tech companies as I would have liked to see.

At the Game Developers Conference in March 2015, the game industry struggled with the “light and darkness” of #Gamergate. Independent Games Festival host Nathan Vella received a standing ovation after he condemned the Internet haters and called for developers to support each other and make games that aren’t embodying stereotypes or caricatures. Amy Hennig, co-creator of the Uncharted game series from Naughty Dog, didn’t want the fear of harassment to turn off young women from coming into the game business. She reassured women that it is possible to have a lifetime career in games without harassment.

“Come on in,” she said. “The water is fine.”
At GDC 2015, Quinn also came up with creative ways to deal with harassment through her Crash Override network and an alliance with the Online Abuse Prevention Initiative. Sarkeesian appeared on The Colbert Report and skewered the anti-feminist critics, and she was named as the only game industry person on Time‘s top 100 list of the most important people. The conversation shifted to diversity, said Kate Edwards, head of the IGDA. Megan Gaiser, former head of Her Interactive (maker of the Nancy Drew games), proposed that fostering true creativity would generate meaning, money, and true diversity. University of Southern California visiting scholar Gordon Bellamy, a long-time game industry figure, hosted a deep, probing discussion on diversity at our GamesBeat 2015 conference. #GamerGate, Bellamy said, “was a wake-up call around how we treat and value each other.” And I found people like Rami Ismail, an indie developer at Vlambeer, had thought deeply about #GamerGate, and they were changed by it and felt compelled to show leadership.
And suddenly, it seemed, women characters in games multiplied. Electronic Arts announced it would include women soccer players in its FIFA 16 soccer game. That move had its critics, but EA exec Peter Moore blasted them for misogyny. We saw excellent games with major women characters like Rise of the Tomb Raider, a game that I am currently replaying with one of my daughters. Microsoft talked about how it enlisted a Native American tribe to design a character in Killer Instinct. There was a genuine movement toward more realistic female characters, as detected by one of the industry’s major motion capture studios.

Now, it is not so hard to find people at the highest levels of the industry condemning Internet hatred and online harassment. Mike Morhaime, the chief executive of Blizzard Entertainment, said in our interview last week that he wants to see the video game industry change in the next decade or so. He didn’t mention #Gamergate specifically, but his intention was clear to me.

“Right now, people still aren’t very nice to each other online, as a general rule. If we can help to make the interactions between folks online safer and more friendly, that would make it all more fun and more gratifying for everyone,” he said.

That kind of talk may not sound as bold as advocates would like it to be, but it is a sea-change from what happened in the past.

Quinn paid a terrible price during all of this. She said herself that she was not the good victim that the industry could rally behind. But some good came of all that she endured. As she wrote, “I won’t ever get my life back, but that doesn’t mean I can’t live in the meantime. Hopefully the next girl won’t have years stolen from her in the first place.”

Those words, to me, feel like the end of a chapter. A sad one. But it’s time to retire #Gamergate and the ugly thinking behind it once and for all.