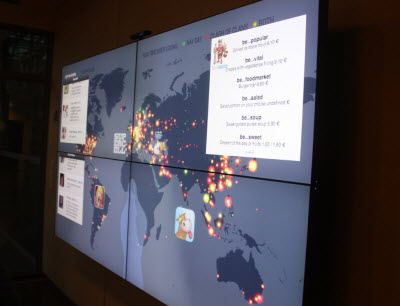 HELSINKI — Even as it shuns the limelight, Clash of Clans maker Supercell has become the most famous company in Finland. It is a mobile studio that’s full of contradictions, and it reflects the dual personality of Finland’s game industry, which is at the same time fiercely competitive yet humble and collaborative.

On the wall to the company’s entrance, Supercell has an electronic display dubbed its “World Domination Map,” with colored lights blinking to show the largest concentrations of its players. But in many ways, Supercell has put those colors on the map by not seeking to dominate the world of mobile games, which is expected to be a $25 billion industry in 2014.

Supercell is in the rare position of enjoying embarrassing riches. It generates millions of dollars a day from three mobile games — Clash of Clans, Hay Day, and Boom Beach. Clash of Clans has been the top-grossing or No. 2 iOS mobile game for more than two years. That led to more than $892 million in revenue in 2013, and this should increase in 2014. This position drew the interest of global telecom giant SoftBank, which acquired a big stake in Supercell last year at a valuation of $3 billion. In Silicon Valley, where people seem to crave being the creator of the next billion-dollar company, this makes everyone envious.

The SoftBank deal made Supercell worth about as much as Zynga, the social gaming publisher that has about 2,000 employees. But Supercell has only 150 employees, including just 110 at its headquarters in Helsinki. While it outsources functions like tech support, it is astounding that Supercell has chosen not to grow, even after getting the huge amount of cash from SoftBank. This is rare in gaming and in business, where the object is usually to create an empire as fast as possible.

Ilkka Paananen, the 35-year-old chief executive of Supercell, shakes off the admiration by saying the company has been lucky, though he acknowledges his team works really hard. 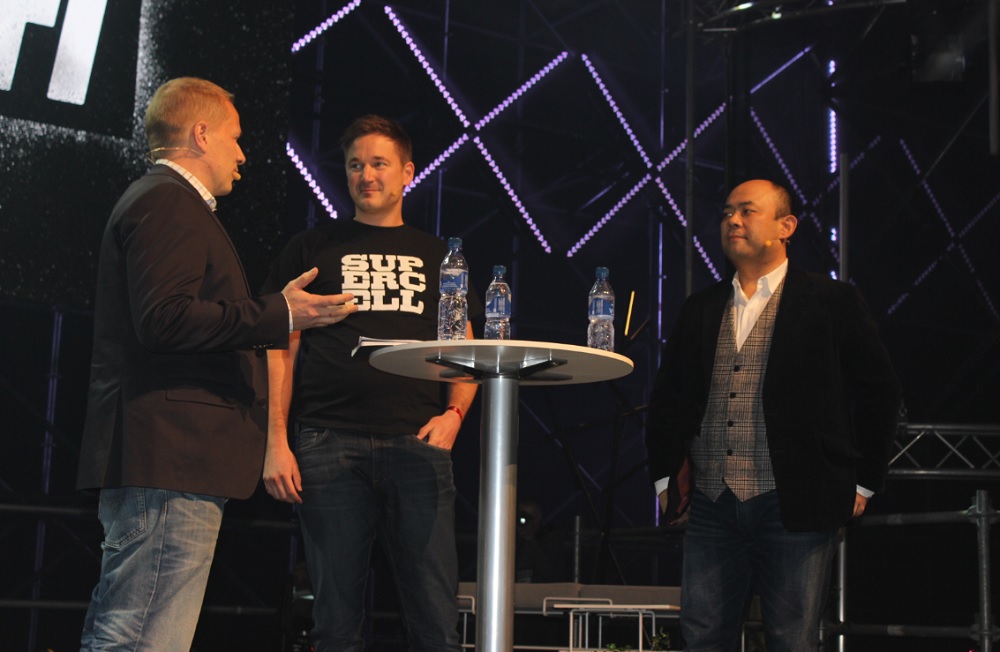 Above: Ilkka Paananen [center] of Supercell and Taizo Son [right] of SoftBank

Image Credit: Dean Takahashi
“We remind ourselves we are trying to build something that holds true for decades,” Paananen said repeatedly during press and speaking events. “We focus on quality. If you really are true about that statement, next month or next quarter are not that important.”

Supercell maintains Clash of Clans with a team of just 15 developers. Taizo Son, the brother of SoftBank founder Masayoshi Son and the leader of SoftBank’s game investments, said in a session with Paananen that he believes slow growth is good for Supercell, because it preserves its way of doing things that made it so successful.

Paananen doesn’t want to be admired or viewed as a seer. He said at a standing room-only talk at Slush 2014, the conference that drew 14,000 attendees to Helsinki this week, “You have to trust your instincts. Don’t do as I say. Do what is right for your company. It’s extremely dangerous to follow the advice of successful people.

“Those successful people often don’t even know why they are successful. Luck may have been part of it. And even if they did know, how do you know their recipe for success is applicable to you?” 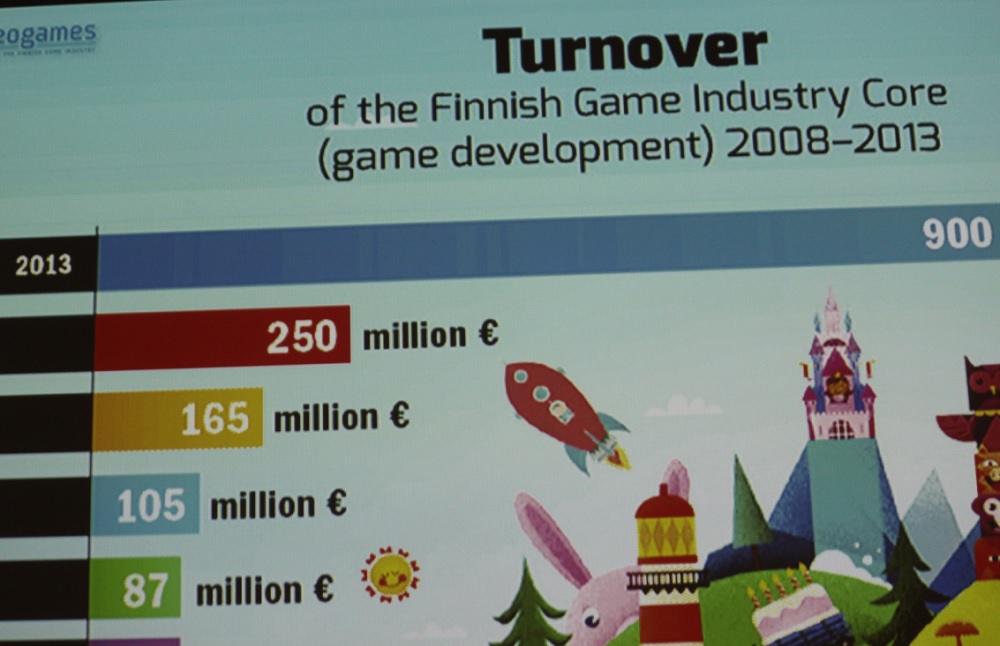 Above: Finland game revenues — these are impressive.

Paananen said his attitude is a Finnish one, and he believes his fellow Finns in the industry values collaboration, as evidenced by its monthly gatherings at Helsinki bars. Finland owes its mobile gaming expertise not only to the legacy of Nokia but also to a community of hackers and enthusiasts who regularly gathered in the early days, honing their skills at companies like Digital Chocolate until the nirvana of the Apple App Store finally arrived in 2008. The Finns didn’t get their 900 million euros in mobile game revenue in 2013 just handed to them. They worked for years to earn it.

At the Slush 2014 event, there was a lot of evidence that Supercell is giving back. Paananen said he is proud to pay his taxes to the Finnish government, which funded Supercell in the beginning via its Tekes investment entity. Supercell is now the fourth-largest taxpayer in Finland. And Supercell was a major sponsor for the event, providing the money for a giant after-party on Wednesday evening.

As it takes this high-profile role, I get the sense that Supercell does it out of a sense of civic responsibility and obligation. Paananen isn’t trying to be the rock star in the spotlight. He points to the quality of the team, where there are many people with ten years experience. He’s proud of Finnish game talent, but notes that half of the people Supercell hires now are from outside Finland, as talented game developers are increasingly rare.

Paananen said it helps that Finland’s own domestic market is small. As such, companies don’t mind sharing the tips they’ve learned about how to break into the worldwide market. It’s a lot less of a zero-sum game than in Silicon Valley, where the competition seems more cutthroat. You can bet, however, that the Finns don’t try extra hard to help out the Swedes, with whom the Finns have a fierce hockey rivalry.

Some of that competitive spirit is motivated by regional rivalries. Finland doesn’t want to be viewed as Sweden’s little brother, said Matias Myllyrinne, the chief executive of Remedy Entertainment, the Finnish publisher of console games like Alan Wake and the upcoming Quantum Break, in an interview.

Sweden, incidentally, claims it has 2,534 game developers. Finland had 2,400 in the first quarter, and it is probably just over 2,600 now, said KooPee Hiltunen, the director of the nonprofit gaming hub Neogames in Helsinki. While the Finns hail Angry Birds and Clash of Clans with pride, the Swedes point to Candy Crush Saga and Battlefield. 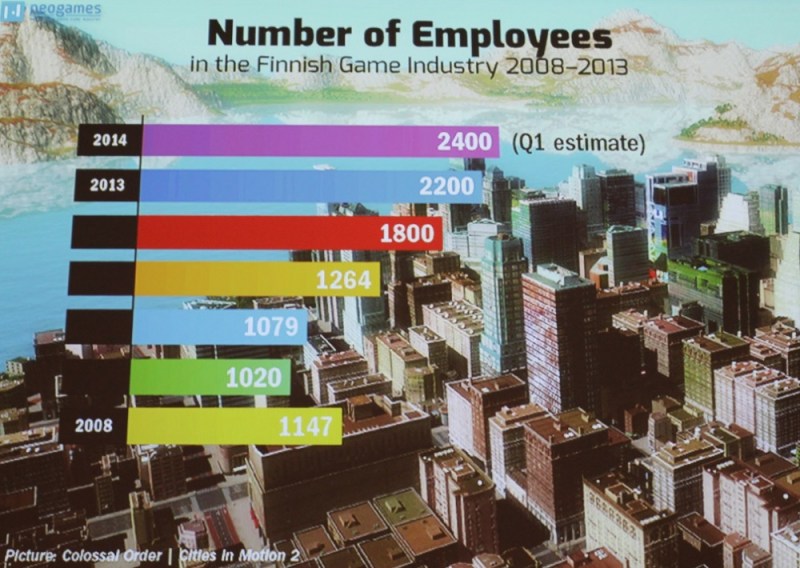 That regional competition is why the Swedes started their own game accelerator, Stugan, this week, said Tommy Palm, one of the most successful Swedish game developers and a co-creator of Candy Crush Saga. But Palm said he admired the collaborative nature of the Finns in mobile gaming.

The Finns demonstrated that collaboration by announcing “IronDanger,” a three-part movie series that Finnish game developers started on their own time. Based on Finnish folklore, the film will be launched in time for a celebration of Finland’s 100 years as an independent country in 2017. Employees from 14 Finnish game companies are contributing their time to the project.

Rovio, the maker of Angry Birds, also operates on the idea of giving back, said Peter Vesterbacka, the so-called Mighty Eagle at Espoo, Finland-based Rovio. That’s one reason the company has launched its Fun Learning project, an attempt to make learning more fun through games and a redesigned curriculum for kids.

Now here’s my billion-dollar idea: Wouldn’t it be something if the Finnish approach was the right one, where collaboration, focus on long-term quality, and humility are part of the winning formula?

Above: Supercell’s headquarters takes up only one floor of this building.

If you look at Zynga, it got lucky with FarmVille and other social games on Facebook. It raised money and grew as fast as possible. But it built its empire too fast and had to dismantle a significant slice of it as its mobile games didn’t take off. Machine Zone, which spent all its resources on Game of War: Fire Age saw huge benefits from going big.

Meanwhile, Supercell isn’t rushing games out. It is building new products with teams of about eight people. Those teams are fiercely competitive, but not in a self-destructive way. I believe they appreciate getting a billion dollars handed to them, just like everyone else.

And in the next cycle of the industry, Supercell may very well lose the race to someone else who adopts a “go fast” or a “go big” strategy. But the Finnish game companies realize that making the dollars the priority is the wrong way to go about winning.

Finland now has the “children of Supercell and Rovio,” or about 20 well-funded Finnish game companies (among more than 200 altogether) that are starting to launch their own first products. These companies will be a test, either following in the footsteps of the leaders or carving their own path.