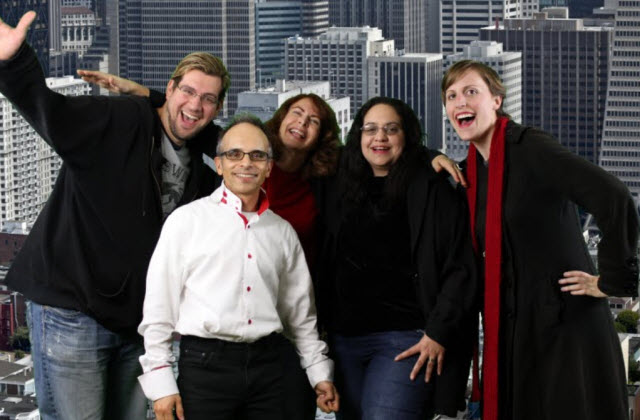 We’ve seen an explosion in game startups in the past few years. Zynga and Nexon have gone public, an indication that we could be nearing the end of a cycle. Their IPOs raise the question: When will there be enough game companies?

Game Dojos, a brand new San Francisco-based accelerator for game startups, thinks we’re not there yet. The game market will be saturated, not when there are lots of game startups, but when many successful game startups come to dominate their particular parts of the market, as Zynga has done. Once dominant players are established, platforms can stagnate, momentum shifts, and the indie game makers move on.

Accordingly, Game Dojos has created a three-month program where it mentors game-startup entrepreneurs, helping them with everything from connections to monetization to a small amount of funding. In doing so, it is following YetiZen, which set up its own game startup accelerator last year with multiple graduating classes. Joystick Labs has also been accelerating game startups in North Carolina.

Cassandra Phillips (pictured far right), producer at Game Dojos and veteran of the startup-conference scene, says there’s no reason there can’t be multiple game accelerators since there are a variety of other non-game startup accelerators in Silicon Valley, all of them churning out Web, social, or mobile-focused companies. It says something about the sheer volume of game startups that there are now multiple entities focused on providing services to them.

“Gaming doesn’t have a lot of the same opportunities to benefit from networks yet,” Phillips said. “There is a disconnect, particularly on distributing games, between the indie game companies and the major networks. Indies are great at making fun and creative games, but they hit the wall on distribution. The No. 1 goal is in building the network to get the games played and monetized faster.”

Ann Burkett, (pictured in red in the middle), the chief executive of Game Dojos, is a veteran of game development. She is the chair of the Silicon Valley chapter of the International Game Developers Association (SV IGDA) along with board member Simon Amarasingham (pictured in white). They have been active in creating game jams, demo nights, and conferences such as the recent HTML5 Developers conference in September that drew 1,000 people.

Burkett said she had been mulling over the idea for a couple of years, as her small game development company was involved with the YouWeb game incubator headed by Peter Relan, and her co-founding partner is an architect working there.

“We want to offer the best mentorship out there,” Burkett said. “We are thrilled with the quality of companies we see out there.”

For sure, the accelerator is late to the startup wave, which really got going about five years ago on social with the creation of companies such as Zynga. With Zynga raising $1 billion in its IPO, however, a new stage is beginning. Zynga may use that money to acquire smaller companies, or to muscle them out of the market with massive marketing campaigns. Some of that has already happened, as the cost of acquiring a new user on Facebook has risen sharply and the funding amount that companies can raise is hitting a ceiling.

But Burkett said the game industry is in a constant stage of change, with some waves ending while new ones begin. Mobile gaming, for instance, is taking off and producing a Cambrian explosion of new startups that want to create the next Angry Birds, the hit game created by Rovio. Game companies can now create one game that can be a hit on the web, Facebook, iOS, and Android, as well as other emerging platforms.

“I say we are at the end of a cycle and the beginning of a new one,” Burkett said. “Once the smaller studios are cornered and the distribution channel succeeds in shutting them out, they will find and popularize a new channel. It’s very hard to contain creativity. The console industry shut itself off from small game studios. That led to the casual web, social games, and now mobile games. This is an industry that does not die and keeps cycling.”

Indeed, the game industry doesn’t seem to have hit its upper limit. Tapjoy alone has used its $5 million Tapjoy Android Fund to give money to 130 game developers in the past seven months. Apple has said it has paid out $4 billion to app developers since the creation of the App Store. Matthäus Krzykowski, managing director at Xyologic, a mobile analysis firm, says that last month, 7,142 new app publishers successfully submitted apps to the Apple App Store, which now has apps from more than 130,000 app publishers. Many of those are games.

Burkett said the company will welcome applicants who simply want to build great studios that make great games. In the past, startups have had to create game monetization, distribution, or development platforms to raise money. From the view of venture capitalists, the latter group have offered more opportunities to disrupt markets, and therefore they can command a bigger value than firms that focus only on making games.

In return for helping its startups, Game Dojos could take a small percentage ownership in the startups. Or it could negotiate to take a revenue split or a fee, depending on the preference of the founders. Because it is a for-profit company, Game Dojos has to remain separate from the nonprofit SV IGDA.

But the leadership is essentially the same. Using connections from the SV IGDA, Burkett and her crew are tapping their networks to provide speakers to advise and drill the first class of teams being accepted for the inaugural program. Current applications are due Feb. 15. The program will likely start in March and accept 10 to 15 teams in the class, with most of the focus on companies with three to five employees. It will offer lessons on game design, distribution, best practices for startups, moving quickly, learning what works and doesn’t, and monetization.

The funding amounts will likely be small at first, Burkett, but could grow over time. More likely, the accelerator will create the connections for the startups to raise subsequent rounds of money from angels or venture capitalists.

Among those serving as mentors are Jessica Kahn, an executive at Disney Mobile; Dennis Ryan, head of publishing at EA’s PopCap Games; Josh Elman, principal at Greylock Partners; Nicolas Beraudo, vice president of business development at Glu Mobile; Rick Thompson, co-founder of Funzio and Wild Needle; Cynthia Woll, game designer; Drew Curby, sales and marketing director at IGN; and a host of others.

For now, Game Dojos has space in The Hatchery in the IGN building, but it is looking for more space.