I took a day off after our GamesBeat 2013 conference this week, since I was exhausted from hearing so much good news. I corralled all 100 of the speakers for the event, which drew more 540 attendees, a bunch of press, and more than 50 chief executives of game companies. We had 365,000 unique viewers with a million total views on the event livestream on Twitch, where our videos are archived. Thank you all who made it a success.

The talks went by in a blur, and I plan on re-watching many of them. I’m still absorbing everything that was said, but I thought I would give some initial impressions today. The short summary: games are in good shape. 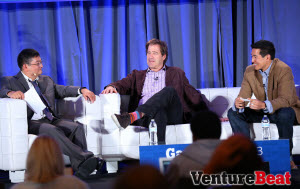 The Zen-like Bing Gordon, partner at venture capital firm Kleiner Perkins Caufield & Byers, spoke a little too much like Yoda for me, so I’m not sure if I’ll ever fully absorb what he said. But John Riccitiello, former CEO of Electronic Arts, made it very clear. The game industry is doing a lot more than just treading water or paying its bills, providing livelihoods for people who would make games for peanuts. Rather, gaming is in the midst of a boom on all fronts.

“What we’ve got is a boom unlike any we’ve ever seen,” he said.

I’m going to zero in on Riccitiello’s fireside chat with me because he gave us perspective. He ticked off the stats. The console software business is about $25 billion a year. The PC free-to-play business is $6.5 billion. Casual, social, and web games are about $6 billion. Smartphone and tablet games are about $13 billion. Hardware generates even more revenue. Riccitiello pulled the data from Magid Associates, Super Data Research, the Entertainment Software Association, and a number of game companies. And he made it seem like he was looking at the game industry’s dynamics from a bird’s-eye view.

“All of them are growing,” he said. “The PC free-to-play and mobile are fastest growing. They are both using a free-to-play micro-transaction model, and that’s the fastest-growing business model in the world. Games are growing in every major geography. Latin America, Europe, Asia, and North America are all growing rapidly. According to Magid, this is the first time when more than half the people in any given age group are gamers. That is stunning, never ever been true before.” 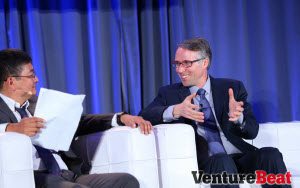 Above: Dean Takahashi and Mark DeLoura

Riccitiello wasn’t alone in his optimism. Mike Gallagher, president of the Entertainment Software Association, shared the view that it was a “fantastic time” to be in the industry. As we heard from President Obama’s game advisor, Mark DeLoura, games have even invaded the White House.

Digital game businesses are killing it, he said. Digital revenue streams, or half the business, were up 52 percent in North America in the past year. Electronic Arts, which has had bumpy times, reported better-than-expected earnings this week. Riccitiello nodded when I mentioned that it seemed like a validation of his own strategy, which earlier in the year wasn’t looking as good and led to his departure from EA. He noted that the consoles are still strong even in a transition year and that Grand Theft Auto V’s sales of 29 million copies will go down as the largest entertainment launch in history.

“Nothing has had more impact than that — not the Star Wars launch or the Harry Potter launch — it’s twice the size of the Super Bowl,” he said.

What does the boom mean? 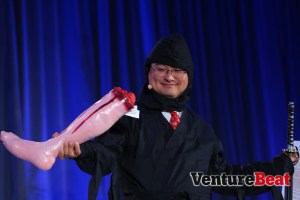 That gives you perspective. It’s not an entirely bloody free-for-all, or Battle Royal, as we called the theme of our conference. There’s room for a variety of strategies. The losers are really just the people who decide to sit this round out and watch the battle from outside the ring.

It means that even smokestack game companies, like physical retailer GameStop, can thrive with a kind of dual strategy with their investments in both retail and digital games. Companies like GameStop can move into new sectors like mobile, but they don’t have to abandon their existing businesses. The sectors pushing the edges of games include e-sports, mobile messaging networks (especially in Asia), and even Facebook.

Many of the speakers gave their opinions on whether consoles or other platforms would rule. Brendan Iribe, CEO of Oculus VR, believes he can peel off a lot of players who want something more innovative than what the consoles currently offer. He is focused on a PC accessory for now, but he has also begun work on a mobile version of his virtual reality goggles. And Julie Uhrman, CEO of Ouya, said that she wants gamers to enjoy broader choices of indie selections, rather than just the blockbusters of the Big Three.

But they don’t have to worry, because in many parts of the world, people are just beginning to consume games. Non-gamers are a rapidly dying breed. Riccitiello said that everybody was going to win, other than subscription massively multiplayer online games. 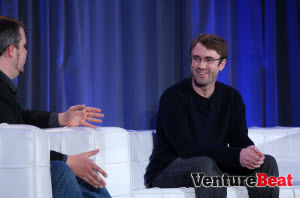 Above: Chris Kohler and Gabe Leydon

And based on preorders, Riccitiello thinks that the PlayStation 4 and the Xbox One will both sell more volume in their first five months than they sold in the previous generation in the first 14 months. You can then expect 20 percent to 30 percent console game sales growth in 2014. That will happen at the same time that free-to-play game platforms grow. Is console or mobile better?

“Right now, it’s a great time to be in either,” Riccitiello said.

Of course, everybody will try to score their share of the riches. Gabe Leydon, CEO of Machine Zone, raised money, put a team of 80 people to work for 19 months, and built a single mobile game geared for a global audience. So far, that huge bet is paying off.

To do that, game makers have to change the way they think about the market, said Simon Khalaf, CEO of Flurry, in his fireside chat. “Think globally. Think monetization. Think of your marketing strategy from day one. Do not rely on Apple to feature your game.”

In the ideal world, a platform won’t make or break a game. You, as a game developer, will eventually hold your own fate in your own hands when it comes to making a hit game.

Riccitiello believes that considerable power still lies in the hands of platform makers, like Apple, Google, and the console makers. To counter that, the game makers should create game brands that are powerful in their own right. If they do so, then they won’t get pushed around by the platform owners in the same way that they do today. Brand owners like Disney, Netflix, or Pandora don’t get pushed around, Riccitiello said.

The mobile market is weaker now because brands aren’t dominating the attention. For sure, brands like Angry Birds are being created. But they aren’t yet proving that they can last for a decade, like many console game brands do. Once those mobile game makers create powerful brands, then they will seize control of the industry and determine their own fates, instead of platform makers deciding for them. 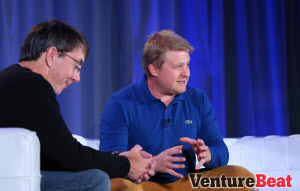 Above: Will Wright and Victor Kislyi

“Brands change the leverage point dramatically,” he said. “If we are going to see value driven on the mobile side, and we will,” then those companies should concentrate on making games.

Now that he has left EA, what’s Riccitiello investing in? He has looked at 130 companies since he left EA. He’s concerned that many of them are being copycats. He thinks of them as lemmings. He found that some of the game talent is taking what they have learned and are applying it to other sectors. That includes Will Wright, another of our moderators and the creator of The Sims. Wright’s new startup, Syntertainment, may be more like a social network than a game company, Riccitiello said.

In other words, once the game makers turn everyone into a gamer, they ‘re going to move into other industries and conquer those too. You can’t get to a more ebullient conclusion than that. We don’t want to over-hype this and turn it into the next destructive, speculative bubble. We heard this a few years ago with the rise of companies like Zynga, which has fallen off its pedestal. But it’s encouraging. Despite my exhaustion from the event, I’m more inspired about games than ever.