The countdown to the launch of Sony’s The Last of Us Part II has a bunch of gamers spellbound. It surged as a topic of conversation this week as Sony and Naughty Dog revealed more of the exclusive game coming to the PlayStation 4 on June 19.

The signs of fan anticipation are there. More than a million people watched the latest gameplay reveal, even though the full game leaked and anybody who really wants to know the full story can find it out there somewhere on the internet. I have a copy of the game for review purposes, but I am bound not to talk about that yet. But I have found a way to speak about how I’m feeling now.

I did not want to look at the leaked material because I wanted to make my way to the ending on my own. It’s been an emotional journey, and I want to get there on my own terms. Playing this game in a pandemic, I cannot tell you what that’s been like, and I am eager to have conversations about it later.

If you’re a fan, you already get the emotional moment that is approaching as we soldier on in our fragile state, sheltering in place without many of our friends or family or coworkers around. Games are a salve, and I can think of nothing better for us than to lose ourselves in the narrative of the sequel.

If you’re not a fan, or you’re not a gamer, I have undertaken this story to explain why somebody you know is about to get obsessed with this game and talk about it incessantly. You can choose to ignore them or pretend you understand, but for the sake of your own safety, please do not tell them that their obsession is unjustified. That’s because the story in games like The Last of Us is as good as any you’ll come across. Forgive your friends if they drop out of Call of Duty: Warzone or Animal Crossing: New Horizons for a while.

The Last of Us came out in 2013 on the PlayStation 3. It was a smash hit for developer Naughty Dog. I played the game and was deeply touched by the story of the teenage girl Ellie and gruff smuggler Joel — two survivors of the zombie apocalypse who spend their days just trying to survive. The graphic violence of the original was horrific, but more often than not it was perpetrated by Joel in the name of protecting Ellie, and later on it was Ellie protecting Joel. Fighting the zombies took skill and stealth, and too often the human enemies were worse.

I played the first game over 22 or so hours and declared it to be my favorite game of all time. It had what I call a bookend story, where the beginning of the game resonated at the ending and you had to think about the beginning of your journey just as it came full circle to the close. It was haunting, like experiencing a ghost story where the ghost returns to you in the end.

I spoke with the game directors, Neil Druckmann and Bruce Straley, about the experience after I finished it, and it was clear that it was one of Sony’s greatest hits of all time. While we had zombie games galore, The Last of Us was an intimate game when it came to characters, story, and combat. Each duel with a zombie or a human enemy was like a life-or-death struggle. You barely had enough bullets to get through a section of the game. You learned to feel like what it would be to exist as a survivor, Druckmann said.

Some 20 years after losing everything that was important to him, Joel was a shell of a human with very little humanity left in him, Druckmann told me. He might as well be a zombie. In his time with Ellie, she pulls that remaining humanity out. The 14-year-old girl becomes the hero, Druckmann said, by bringing the older man back to life. And then, at the end of the first game, Joel faced the moral dilemma of choosing whether to sacrifice someone he came to love as a surrogate daughter in the name of stopping the plague. It became a question of how far a father is willing to go to save his kid.

Joel made his choice, and the repercussions of that choice will play out in Part II. For the choice he made, many people might consider Joel to be a monster. But as a parent, I can understand the dilemma he faced.

Above: The Last of Us Part II has finely detailed graphics.

I played this first game with my eldest daughter, and it was good to show her the character of Ellie at a time — even though it wasn’t all that long ago — when we didn’t see so many female protagonists who were normal people (not superheroes or highly sexualized women) and could handle their own. Back in 2013, and certainly before that, it could be a commercial risk to launch a game with a female protagonist. That is no longer true.

At Naughty Dog, they were surprised at the game’s popularity and even taken aback at the criticism that the game had strong female characters. The enemies of diversity in games would later develop a lexicon for this, saying the developers were “woke.”

Druckmann said the intention was always there to have a story with dual protagonists, each with strong arcs that affected the other. It was not just a teenage girl being escorted on a mission by a middle-aged man. As my daughters played, I felt it was good for them to have the agency of being Ellie, as she fought back during her crucible moments.

But this would not be such a strange thing today. We have a lot of strong female characters and improving diversity in game characters. But back in 2013, this was something original to have strong characters who were men, women, black, white, gay, and straight. They were fleshed out, but Naughty Dog took heat for being on a soapbox. Part II adds to the diversity with multiple Asian characters, lesbian relationships, and people with very different points of view than Ellie or Joel, as we have seen in the trailers. 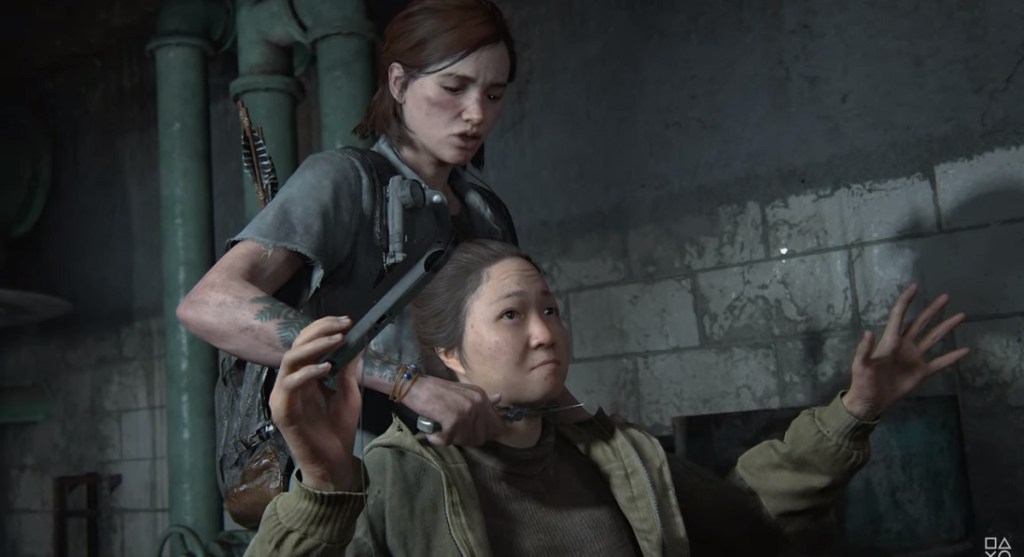 Above: Naughty Dog shared this scene in its latest trailer for The Last of Us Part II.

As I saw the extended trailer for Part II this week, I felt a new appreciation for the difference between the old game and the new game in terms of technological improvements. The story spans seasons and climates, from the snows of Jackson, Wyoming, to the lush landscapes of Seattle. The cities are authentic, as you would expect them to look after a pandemic.

As the trailer showed, Naughty Dog wants you to know that Ellie can do more. She can swing on ropes, traverse vertical structures to avoid trouble, navigate boats, ride horses, break glass, and crawl through grass. She faces enemies such as dogs who can trace her footsteps, stealth warriors who can attack her with arrows, and large numbers of zombies. Ellie can sprint, dodge attacks, and time her counterattacks. She can use enemies as a shield, and she can get help from her friends. This makes combat far more diverse than in The Last of Us.

And as she could do in the first game, Ellie can pit enemies against each other, making zombies attack human enemies. Druckmann said that this is Naughty Dog’s largest, most ambitious game.

As you delve into the development story of this game, you’ll come across allegations of crunch, or heavy overtime, at the Naughty Dog staff. Depending on how you feel about that, you may come to resent the company or the development leaders. You are entitled to feel what you want about that. But I do think you should play it, and not dismiss the creative work because of how it was created.

I do not mean to justify crunch at all. But I think that I can understand why perfectionists would work so hard on such a game. So much passion goes into it, they want to keep working and do. Others wonder if they have to do the same, and then a lot of people start doing the same whether they want to or not. It’s something for managers to contemplate. I hope the industry solves this challenge.

And I know I’m lucky to be playing this first. But it’s a bummer not being able to talk about it yet. I trust Naughty Dog more than any other studio when it comes to telling a story. As I finish the game, I’ll have plenty of time to soak it in and figure out what I think about it. For now, we have plenty of anxiety to go around as we all wait to see what happens in The Last of Us Part II.