BERLIN — Germany isn’t the biggest player when it comes to gaming, but it is brewing some game companies that, with luck, will one day be better known than the country’s beer.

I saw this as I visited Berlin’s Quo Vadis game developer event, which was just one of 11 different happenings related to gaming and tech during the week. As I toured around briefly, I felt like Germany had some growing pains that I’ve seen before at companies in the U.S. But it also has potential, because it is creating some of the right conditions for good things to happen. 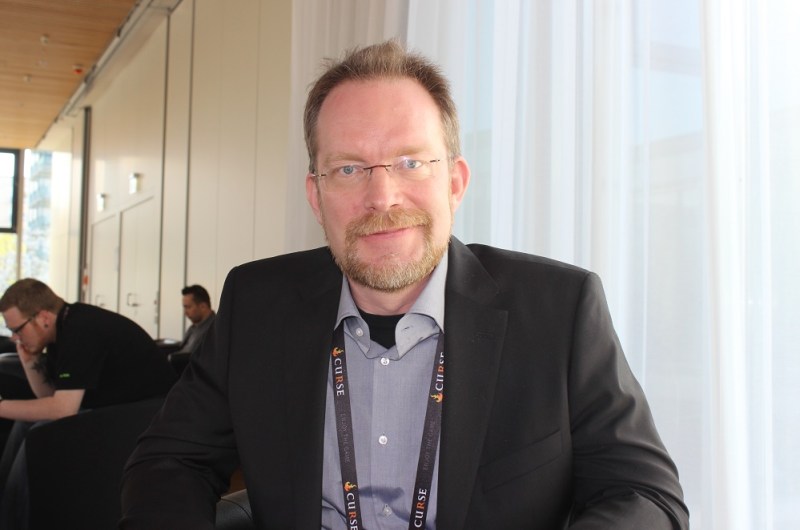 Above: Stephan Reichart of Quo Vadis

The impressive thing about the Central European nation’s rise in gaming is that it’s a product of entrepreneurship and a little bit of government support. Germany supplies a small amount of financing, tax breaks, advice, and space for startups. But mostly, it’s a bootstrapped industry. Fledgling companies like the region’s low costs and maelstrom of tech talent (which includes many expats from all over the world). But it’s really a long-held passion for games that keeps it all going, said Handy Games chief executive Chris Kassulke, a Wuerzburg, Germany-based studio that has worked in mobile for 15 years.

The International Games Week Berlin — a mini-version of the huge Gamescom event in Cologne, Germany, every August — is a kind of collaboration that you would never see in the United States. Quo Vadis itself had about 2,500 registrations, up 400 from a year ago. Its audience was spread thin among the other events and venues. But these showcases are friendly, not competitive, toward each other.

Berlin officials would like to argue that their city is the best gaming hub in Europe. But numerous folks from outside of the city noted that it has a smaller population of gaming employees than Hamburg, Cologne, and other locales.

All of Germany’s various game hubs are on the rise. From 2004 to 2013, the number of game developer and publisher jobs in Germany grew from 6,938 to 10,230, according to Elmar Giglinger, the chief executive of the German government’s Medienboard Berlin-Brandenburg, the regional government entity that deals with the film and media industries.

Revenue among these game companies has risen 14 percent per year. And if you count user acquisition and marketing tech, the number of industry-related jobs rises to 25,000, said Stephan Reichart, the organizer of Quo Vadis. That’s a lot more than Finland’s job base of 2,600 game developers, and a lot less than the U.S., which has big publicly traded game companies.

Berlin has a lot of room to grow. It has much more land mass than London, but it has a population of just 3.5 million, or less than half of London’s 8 million. Costs are low, prompting companies such as King and Kabam to set up offices in the region.

But Berlin and Germany have a long way to go in some respects. Germany’s historical market share of the gaming business has fallen as the big hits are produced elsewhere. Supercell and Rovio have put Finland on the map with Clash of Clans and Angry Birds. King has big hubs in London and Sweden thanks to Candy Crush Saga. And Machine Zone has its hubs in Silicon Valley thanks to Game of War: Fire Age.

Finland gave generous support to Supercell with early financing, and now it’s reaping the reward from tax collections. The U.S. doesn’t have similar subsidies, but it has a long history of funding game companies through venture investments.

Unlike the U.S., Germany doesn’t have a big entertainment industry. The German government pumps a huge amount of money into films, but the movies aren’t global blockbusters. By comparison, it has pumped scant money into games, partly out of the politically driven concern that they’re bad for kids, too violent, or too addictive.

Venture investors don’t pour tons of money into games in Germany. Companies such as Goodgame Studios, which had $220 million in revenues last year and 245 million users, grew without such funding.

Germany’s game market is around $3 billion. And market research firm Newzoo estimates that the overall game market is $91.5 billion. But German game developers and publishers themselves only hold about 7 percent of their home market, said Reichart. That is down from 11 percent in the past. So, while the number of German game industry jobs has grown, German share of the industry revenues has not grown as fast as foreign share of Germany’s game revenues.

“We need to stand as an industry and get back to where our market share was in the past,” he said.

The money is where the hits are, and King’s Candy Crush Saga fuels a strong game development community in London and Sweden. And Supercell’s hits — Clash of Clans, Hay Day, and Boom Beach — brought $1.7 billion in revenues to Finland. That single Helsinki game generates more revenue today than all of Germany’s game developers.

One of the problems is that Germany’s early focus on free-to-play browser-based online games — pioneered by companies such as Gameforge and Bigpoint — took a big hit in the transition to mobile gaming. Crytek, the biggest console game developer and maker of the CryEngine, also fell on hard times.

Germany’s mobile game companies such as Hamburg’s Goodgame Studios and Berlin’s Wooga are doing well, but they aren’t the biggest kids on the block when it comes to the global mobile gaming market. 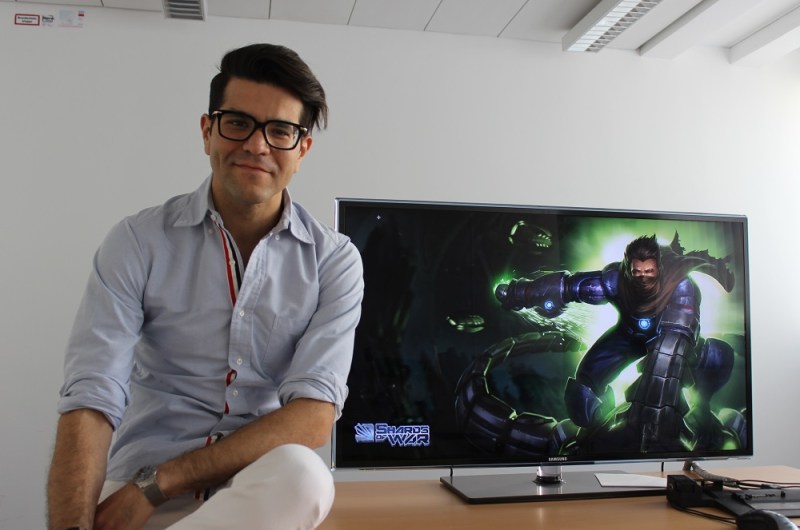 Above: Khaled Helioui, the CEO of Bigpoint.

The hits will come, as the remaining German game companies are consolidating and doubling down on online and mobile game development. Hamburg’s Bigpoint has just five games under development, a lot fewer than it has had in the past, as it focuses on higher quality, said Khaled Helioui, chief executive of Bigpoint, in an interview with GamesBeat at its Berlin office.

“It’s been a hard couple of years for Germany,” Helioui said.

Reichart said that part of the problem is that the German market itself has been big enough for local developers to target it. The Quo Vadis conference went on for nine years before it switched from German to English-language talks.

“That’s a typical problem in Germany, where you have to force the Germans to think beyond the German market,” Reichart said. “We were pioneers in free-to-play, and we have to keep this position. If we lose this position, the few really successful companies we have in Germany will be bought or disappear.”

By comparison, Finland is so small as a domestic market that Supercell had to think about being global from day one. The thing that is changing is that Germany, particularly Berlin, is having great success attracting game developers from other regions. Wooga has 40 different nationalities among its 250-plus member staff. 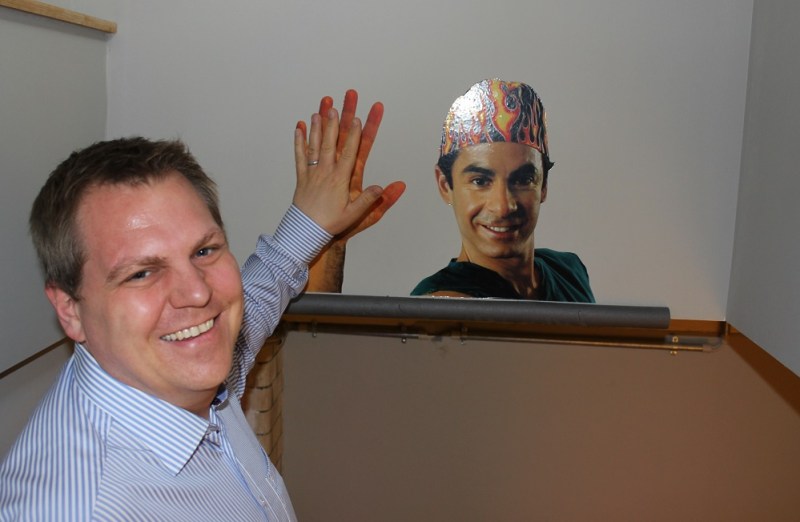 Above: Jens Begemann, the CEO of Wooga.

Jens Begemann, the chief executive of Berlin’s mobile gaming company Wooga, told me that of the top 30 German corporations, none are based in Berlin. That means that the region doesn’t prosper because it has giant companies that employ tons of people. Rather, Berlin has to create jobs in other ways.

“Berlin has to grow through its startups,” Begemann said. “And we have to find talent from other places and bring them to Berlin. The good thing is they are willing to come. This is a place where they can get by without knowing a word of German.”

The mixture of local and foreign employees is good. The transplants should bring more creativity to Germany than it has historically had. Nicole Demeo, the chief marketing officer at Glispa and an American expat who visits Berlin a couple of times a month, said that German companies are solid, but they need help with marketing themselves. And slowly, that talent is relocating to Berlin.

“It’s a real expat community here,” she said. “It has taken some time, but Berlin’s startup community is really strong.”