Free-to-play games were born in Asia, and it’s easy to see why gaming is growing at a faster clip over there. In fact, the largest free-to-play PC online game in the world is Tencent/SmileGate’s CrossFire, which generated $957 million in revenues last year.

Five of last year’s top ten free-to-play online games came from Asia. It’s worth noting that China’s Tencent, the majority of owner of League of Legends creator Riot Games, generated more than $5.3 billion in revenue from games in 2013, making it the largest game company in the world, eclipsing even Activision Blizzard with $4.8 billion.

It’s easy to see where this is going. Asia is going to be the king of the games business. In fact, it already is. The question is just how much of the business the Asian game companies will own. Alina Soltys, a senior analyst at M&A advisory firm The Corum Group, noted that nine of the top ten acquisitions in gaming in 2013 had Asian acquirers, compared to eight of the top ten in 2012.

Asia will account for 82 percent of the growth in the game business this year, according to a new report today from market researcher Newzoo.

“China as a country and mobile gaming as a market segment grew even more than anticipated” in 2013, said Peter Warman, chief executive of Newzoo. “As Asia continues to grow at a staggering pace and business models and game devices in the East and West have become more aligned, the games market is becoming a truly global playground.”

As the Electronic Entertainment Expo (E3) video game trade show approaches in early June, it would be good to remember these facts. No region can take its game industry economy for granted. I was just in Angouleme, France, for the Video Game Economics Forum. There, the talk was all about how the region can regain its vibrancy in games, similar to places like Montreal, Canada; Helsinki, Finland; and Silicon Valley. And in Silicon Valley, where I live, it seems like everybody wants to learn from the fast growth of mobile and online gaming in Asia. The grass is always greener somewhere else.

In the U.S., the overall game business was flat in the first quarter, partly because Nintendo is slipping dramatically even as Sony and Microsoft gain with their next-generation hardware and software sales. Microsoft hopes that it can grow faster by launching its Xbox One video game console in China in September, ending a 13 year ban on consoles there.

In China, there are 80,000 app developers who are releasing about 100 games a day, according to GPC China Games Market Report. PC client games still account for 64.5 percent of revenues, while web games are 15.4 percent, Soltys noted. Mobile games are 13.5 percent, but revenues grew 250 percent in the year.

There are some big acquisitions happening. SoftBank bought 51 percent of Supercell for $1.53 billion, and Tencent bought 40 percent of Epic Games for $330 million. In 2013, there were 20 online gaming acquisitions and 12 mobile game deals. The total value of M&A in Chinese games in 2013 was $3.1 billion, according to Soltys.

The Corum Group says the top Asian game company acquirers include Nexon, which made 10 recent acquisitions, followed by SoftBank with four, Alpha with four, Zqgame.com with three, Ourpalm with 3, Gamevil with 2, GungHo Entertainment with two, and Tencent, Shanda, and Susino with one each. China has seen IPOs of game companies such as Binary Sale Technology, Boyaa, Forgame, and ICG.

While Kickstarter has taken off in North America, crowdfunding in Asia is picking up with companies such as Pozible in Australia, Kitabisa in Indonesia, Campfire in Japan, Demohour in China, Zeczec in Taiwan, Fundu in South Korea, and Fundator in China.

The mobile messaging networks — which help games spread by making free and viral game discovery happen much more easily — are also opening the doors for growth in mobile games. Tencent’s WeChat has taken off in China, Kakao has blossomed in South Korea, and Line has grown in Japan. The success of those mobile messaging networks — driven by heavy mobile social game activity — prompted Facebook to buy WhatsApp for $19 billion. In 2013, for instance, there were six Kakao games in the top 10 iOS titles in Korea.

Of course, not every Asian gaming firm is going to succeed. Japan’s DeNA and Gree have seen slower growth because of the success of the rival mobile messaging networks, which are now maneuvering to spread worldwide. Tango, which just received a $215 million investment from China’s Alibaba, wants to use games to vault over its rivals in mobile messaging networks.

I’ve rattled off a lot of numbers, but I haven’t answered the basic question in my headline. Right now, the Western game companies are creating some of the hottest properties, like Assassin’s Creed or Call of Duty, while the Asians seem to have figured out monetization in fast-growing digital games. That will help preserve some balance in the world. But every region has to step up with its own financial might or find its role minimized in the future.

At some point, it seems like the U.S. game companies are going to be like pawns in a larger global chess game. Anyone who thinks only about one region is going to be a small fry. And that happens to be the theme of our next GamesBeat 2014 conference. 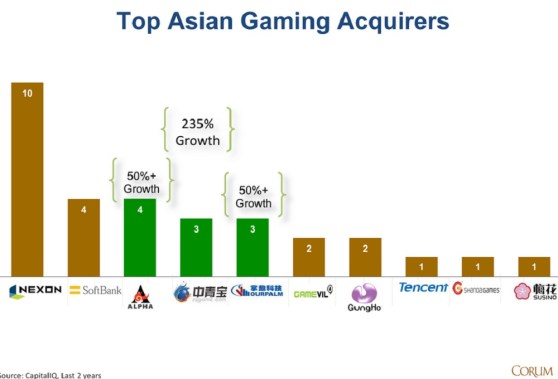