Nobody questions the viability of Microsoft’s Xbox business anymore. The company generates billions of dollars a year and healthy profits in the video game business. But back in the early years, the picture was bleak. Microsoft lost around $5 billion to $7 billion in the first four years of the Xbox business. That period of “investment” had to happen before the business started humming with the 2005 introduction of the second-generation Xbox 360. 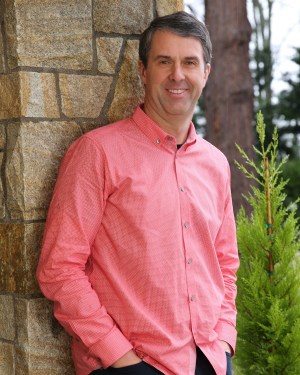 That lesson, which former chief Xbox officer Robbie Bach will impart to our audience at the GamesBeat Summit next week, is important for the virtual reality industry to remember. Market researcher TrendForce estimates that VR will grow from $7 billion today to $70 billion in 2020. Tech adviser Digi-Capital estimates VR will hit $30 billion by 2020, and augmented reality will hit $90 billion. That kind of hype will keep the dreamers and the investors going.

But first, virtual reality has to survive. The major VR systems are hitting the market. The Samsung Gear VR mobile headset launched in November of last year. The Oculus Rift debuted on March 28. The HTC Vive hit in the first week of April. And Sony’s PlayStation VR will debut in October. Google and Apple are reportedly working on cool things in this space as well. Microsoft is prepping its HoloLens AR technology. These are exciting and tangible events for those who have been waiting for VR to happen for decades.

So far, nobody is bragging about how many VR devices they have sold. In my book, that means that the numbers aren’t big. I expect Sony to be the company that sells an impressive number of VR units at launch. It will have 40 million PS4s in the market by October, and it will be selling PlayStation VR for just $400. Market researcher IHS estimates Sony could sell 1.6 million VR units this year. And Macquarie Research estimates Sony could sell 8 million PSVR units within 24 months.

But let’s get real. Startups in VR have already raised billions of dollars, and they’re burning cash. John Riccitiello, CEO of game engine maker Unity Technologies, warned last year about a possible “wave of disappointment” that might follow the initial VR launches. We have seen such waves in gaming with fads such as virtual worlds like Second Life, stereoscopic 3D on the Nintendo 3DS, Facebook canvas games such as FarmVille, “gamification” startups, and the Nintendo Wii. When the fad died down, times got tough. Those businesses didn’t disappear, but the survivors were few.

Startups have to be ready for both a rocket take-off as well as lean times.

“It depends,” said Sunny Dhillon, a partner at Signia Venture Partners and a speaker at SVVR. “Do you need adequate funding runway to get to your next funding? To get to profitability? You may need $5 million or $10 million rounds.”

The problem, said Marco DeMiroz, cofounder of the Venture Reality Fund, is that “you don’t know the adoption rate.” 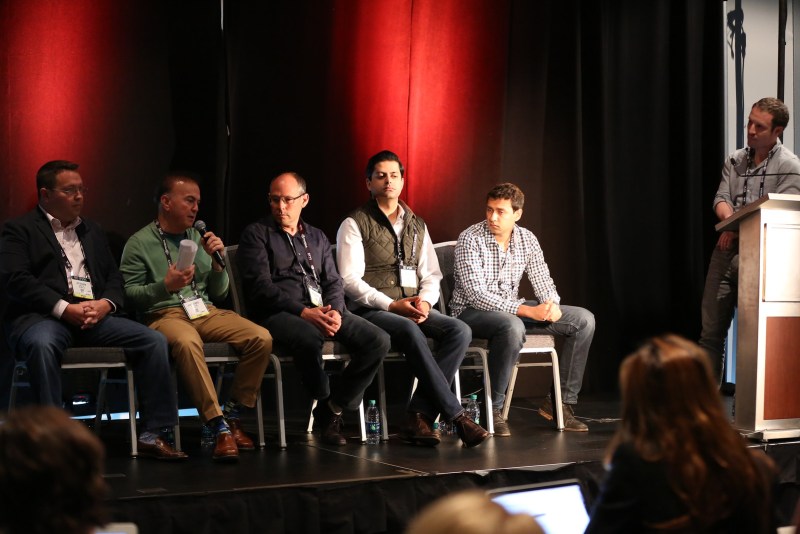 Above: VR investors. Marco DeMiroz is holding the microphone.

“You have to structure a company for longevity,” DeMiroz said. “Our companies are funded for 18 to 24 months or more.”

Nobody in VR software will make much of a profit in 2016. The same probably holds true for 2017. And maybe even 2018. Around 2020, maybe we’ll start seeing a return on investment. And if that happens, then the VR industry will be more successful than Microsoft was at the outset of the Xbox business. Are today’s startups and platform makers prepared for four years of losses before they start to see the return on their investment? We saw a good historical precedent for that in the Xbox. We have to get ready for a lot of failures and a few successes.

Now if I were simply looking at this from a gaming point of view, I would be depressed. But Ben Lang, executive editor at Road to VR, said in a talk at the Silicon Valley VR Expo this week that “VR is not a subset of gaming. Gaming is a subset of VR.” Indeed, many speakers at SVVR pointed out that VR is happening in a horizontal way, with many different niches like medicine, industrial, education, and entertainment. Those industries will help VR realize its potential as it awaits its killer application. Pursuing all of these avenues at once is one way to make VR survive the lean years.

“In no uncertain terms, virtual reality is going to change everything about how we experience and interact with content,” said John Pleasants, executive vice president at Samsung and a speaker at the Samsung Developer Conference this week in San Francisco. “It makes the impossible possible by bringing users to places they otherwise would have never gone to or by enabling people to better understand and connect with others in an empathic way they may never have imagined. VR is ushering in a generation of immersive storytelling and will revolutionize the way we think about business, communication, and entertainment.”

Pleasants didn’t disclose Samsung Gear VR sales. But he did say that users have watched over 2 million hours of VR content such as 360-degree videos. He noted that the app stores took a long time to take off during the smartphone revolution, and when they did, the world of apps boomed. Pleasants expects the same trajectory for VR. 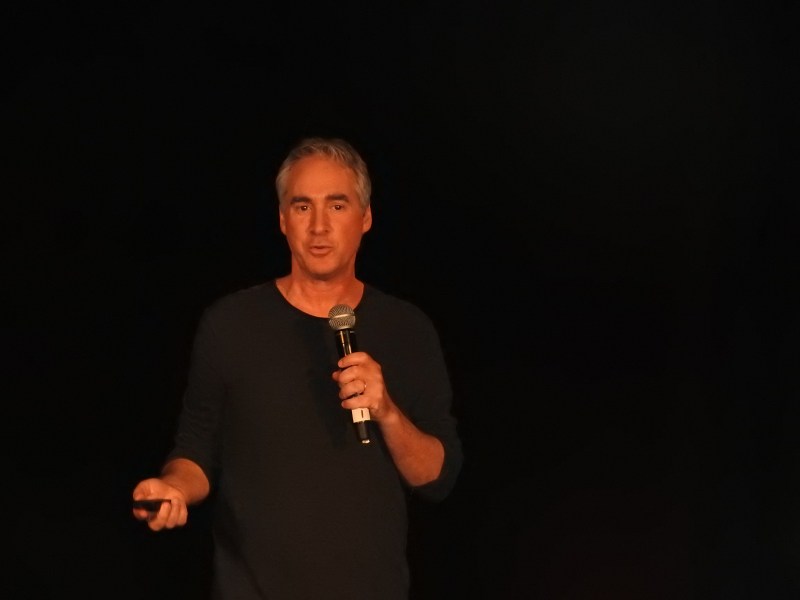 Ted Schilowitz, a futurist at 20th Century Fox and VR camera creator at Barco, helped put a lot of this in perspective during a talk at SVVR. He noted that everybody has some kind of “wow” moment when they first try VR. It’s transformational.

“They lose their mind,” he said, showing videos of everyone from little girls to grandmothers getting so excited about VR experiences. VR really makes you feel immersed in a world and like you have visited another place, he said. Some people dream about the places they’ve seen in VR, he said.

“When cinematics are crafted correctly, people would say they had this dream about it and remembered it as if they were really there. It is spooky. VR creates ‘wow’ when it is done right.”

Sivan Iram, general manager at River Studios, a VR studio, believes that advertising will be a huge opportunity to monetize the low-end side of VR. But he notes it will be a while before it happens, since “massive scale is important for advertising.”

He added, “The tracks are being laid, but it will be a few years.”

Companies can take advantage of the wow factor. For a time, VR creators will be able to craft arcade-like experiences in shopping malls or theme parks where they can charge people a few bucks for a VR experience. That will help some companies pay the bills. If you add a motion platform, as Samsung did with its “VR rollercoaster” experience this week, then you can really make the experience more believable.

“You will eventually have your own little theme park in your house,” Schilowitz said.

A panel of VR investors also noted that selling tools, such as 360-degree cameras or capture equipment, to developers will be a real market as well. That business-to-business opportunity of content creation tools is something that could generate revenue, said Dhillon. Some of the tools are familiar, like the Unreal and Unity game engines, while others, like Nokia’s $60,000 Ozo 360 camera, are novelties created just for VR.

“We are honing in on what’s right,” Schilowitz said. “But the promise of what this can do is so important that I spend a lot of my time in this world.” 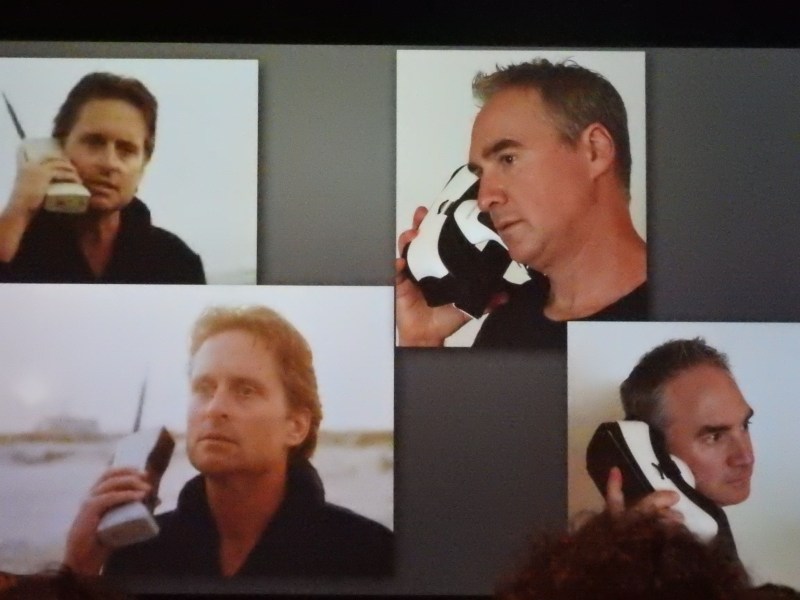 Most important of all is the perspective of time. Schilowitz noted that the cell phone used by the Gordon Gekko character in the film Wall Street looks so silly now. He said it was eerily similar to the way that the Samsung Gear VR looks today.

“We are in the brick cell phone days,” he said. “Imagine if we stopped with that. We wouldn’t be here today. You have to be bold, be brave, take risks. Be willing to explore the edges. you never know what you might find.”

Lastly, some overseas markets might take off more quickly. The Chinese certainly have an appetite for VR, as they’re making dozens of different VR headsets. And the Asian Internet cafes might very well get a new life thanks to VR, as places where people can go to experience VR as they’re waiting for the prices to come down.

Lots of risks make it wise to sit out the VR revolution. But Palmer Luckey, founder of Oculus VR and a speaker at SVVR, pointed out that he also sees a lot of risks for inaction, as the opportunity for learning how to craft, hone, redo, and eventually perfect VR experiences is now. And what opportunities does Luckey see?

“VR apps have more diversity than mobile,” he said. “In mobile, you have short loops. You are in and out real fast. When you are suited up in VR, you are committed. You don’t have to make loops that are so short. I think that space, flight, and racing sims are going to be cool.”

And what does Bach, the former chief Xbox officer have to say about this?

“There are so many new platforms,” he said in an interview. “If these things bring better games, people will buy them. The longest console cycle in history might lead to the shortest cycle in history. There are certain truths that transcend all of these generations. There’s more fragmentation and more opportunity than ever before.” 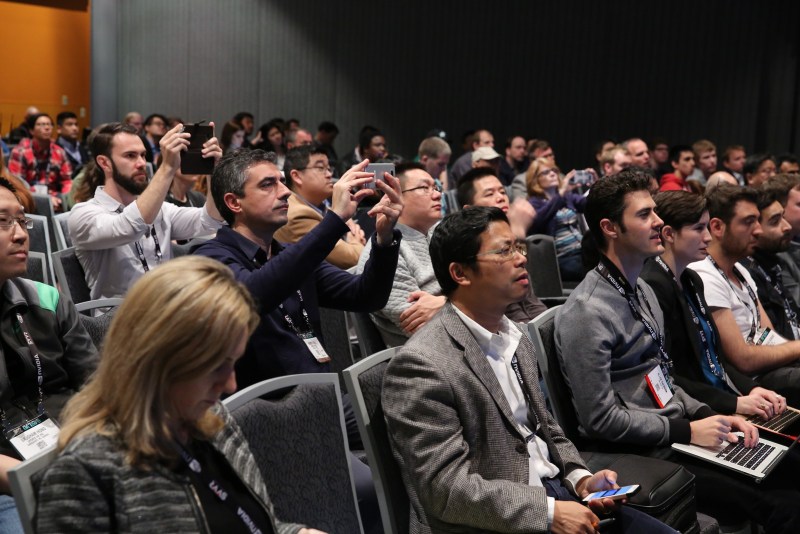