I spent time on three continents this year, and I’m more and more convinced that we live in a ridiculously global gaming village. I went to ChinaJoy in Shanghai, E3 in the U.S., the Videogame Economics Forum in France, and Casual Connect Europe in Amsterdam, all important events in video game industry. In each place, I’ve heard unbridled optimism about the gold rush of opportunities in games, the expansion of the industry’s borders, the explosion in indie game development, and the opening of new territories and new audiences.

The borders are melting. It’s an interconnected world. Dong Nguyen of Hanoi, Vietnam, set the world on fire earlier this year with a frustrating and addictive Flappy Bird game that just about everybody played — and threw down in disgust. In Helsinki, Supercell has dominated the revenue charts with its Clash of Clans and Hay Day games, while Japan’s GungHo Entertainment raked in the money with the wonderfully misspelled Puzzle & Dragons. Sweden’s King (which has its chief executive in London and its formal headquarters in Dublin) is crushing it with Candy Crush Saga. The Americans, not to be outdone, have come back with their finest: Glu Mobile’s Kim Kardashian’s Hollywood. This wave of global games is just the beginning. What will the next wave carry in?

Mobile games are expanding our gaming world because smartphones and tablets have penetrated every territory. Mobile games alone are expected to generate $15.2 billion in revenue in 2014 from 1.27 billion gamers around the globe, according to market research firm Newzoo. All told, Newzoo estimates that the global game market will hit $81.5 billion in 2014, up 8 percent from a year earlier, and reach 1.75 billion gamers, or one in every four people on the planet.

The consequences of this change will be profound. That’s why we’ve chosen “Total World Domination” and global gaming as our themes for GamesBeat 2014, our conference on Sept. 15-16 in San Francisco. At this event, you’ll hear stories from game makers from Asia, North America, and Europe. The interdependencies are so huge that there’s no way to unweave these threads.

The stories that I’m picking up from my travels are akin to those that Thomas Friedman, columnist for the New York Times, wrote about in his bestselling book, “The World is Flat,” which chronicled how the internet and technology are pushing globalization forward. Clearly, mobile is the pushing the globalization of gaming, and it is making me free-associate about all of the threads of global gaming that I have witnessed around the world. 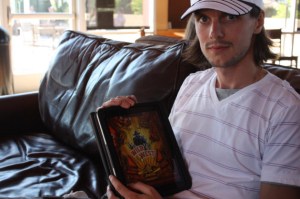 One of my favorite stories about globalization involves Gameprom, a Kyiv, Ukraine-based game development house that specializes in making pinball games on smartphones and tablets. A few years ago, I learned from Sergey Volskiy that his team had never played real pinball machines. They learned how to create pinball games by watching YouTube videos of pinball games. The internet had knocked down a cultural barrier that would have otherwise fenced off Ukraine from the gaming world. The team in Eastern Europe was making games for a mostly American audience, mainly by studying the American culture from afar.

But geopolitics have come back to cause problems, with the tensions with Russia causing huge disruptions among the Ukrainian gaming hotbed. Some of those developers relocated to Israel, which has a strong connection to the Eastern European Jewish community. The war in Gaza further disrupted the game developers, forcing people like Shai Magzimof, chief executive of mobile multiplayer gaming startup Nextpeer, to hit the bomb shelters a few times a day as rockets flew overhead.

The Gaza war also prompted Oded Sharon, head of Israeli game developer Adventure Mob to re-pitch a Kickstarter campaign for Bolt Riley, a game about peace. He successfully raised funds to create the first leg of his reggae game, which is set in Jamaica.

Language and culture used to present insurmountable barriers for global gaming. But good translation is one reason that Brave Frontier, a role-playing game created by Japan’s Gumi, is starting to kick Puzzle & Dragons’ butt outside of Japan, according to AJ Redmer. With the money from Brave Frontier, Gumi has hired Redmer — a co-creator of the Xbox 360 video game console and the former chief of Microsoft’s game studio in Japan — to create mobile game studios in Austin, Vancouver, Stockholm, and Kyiv.

Above: Darren Jobling, CEO of Eutechnyx.

In China, it’s entertaining to see FunPlus, a Beijing studio that just sold off a game division for $960 million, competing with Zynga to see who can create the best farm simulation game. Zynga’s FarmVille used to be the king, but on mobile, Supercell’s Hay Day and FunPlus’ Family Farm titles are real contenders. And before you claim that the Chinese cloned FarmVille, it’s worth noting that the social farming genre got its start in China.

If you think it’s strange that the Chinese are playing and making Western-themed farm games, another company, Eutechnyx in the United Kingdom, is betting that the Chinese will like Western-themed online car racing games. At ChinaJoy, amid an area filled with distracting booth babes, Darren Jobling, CEO of Eutechnyx, told me that he hopes the infatuation that the nouveau riche in China have for foreign cars will inspire envy — and demand — for his Auto Club Revolution game, which is being built both in the U.K. and in Chengdu, China.

It’s fun to watch Microsoft prepare to launch the Xbox One game console in China, where it has rounded up dozens of local game makers to create only-in-China games. One of its anchor games may be a free-to-play version of Dungeons & Dragons, a distinctly American game made by Perfect World, a Chinese game company with a team in Los Gatos, Calif.

If you think back just a decade, it’s hard to believe how small gaming used to be. Mobile games were crude and rudimentary. Most American game companies operated only in the North American and Western European markets. Consoles and $60 games were too expensive to be sold in most emerging markets. Piracy was rampant. But with the onset of free-to-play digital games, everything has changed. Asia is now 45 percent of the global market, compared to 27 percent for North America, 24 percent for Europe, the Middle East, and Africa, and 4 percent for Latin America, according to Newzoo.

It used to be that EA would talk on its earnings calls about revenues in North America and Europe. It was shut out of Japan. But now its titles like FIFA 15 and 2014 FIFA World Cup Brazil are selling around the world. It has revenues coming in via its FIFA Online 3 game in South Korea, and Plants vs. Zombies 2 is generating revenues from free-to-play gamers in China. Digital revenues — from online and mobile games — will be $2.1 billion of EA’s expected $4.1 billion in projected revenues for the current fiscal year. Those revenues aren’t just coming from traditional territories. They’re coming from the world over.

Not only is gaming growing around the world, it is also gaining ground on other entertainment in competition for the time of consumers. Gaming is changing economies around the world. I wouldn’t be surprised if the industry employs millions across the globe. What does this dizzying travelogue mean? I don’t know. I’m just watching. And playing.