You may be sick of it, but #GamerGate is gathering momentum as a topic of conversation on social media. It’s been brewing since August, and I weighed in on it a couple of weeks ago. Depending on who you ask, it’s either about death and rape threats made against female critics of the male-dominated game industry, or a grassroots movement to address bad ethics in game journalism. Much of the argument is about the attempts by either side to hijack the conversation in a particular direction. As we’ll see in a bit, big data analysis of social media can tell us a lot about what this is really all about.

One thing that’s clear is the growing notoriety of #GamerGate, a hashtag on Twitter that actor Adam Baldwin (best known for the sci-fi TV series Firefly) created in reaction to a controversy that started as a spat between lovers. Appinions, a media analysis firm, created a custom report for GamesBeat on the social media and all media around #GamerGate. As you can see from the chart, #GamerGate had a steady buzz, and then it had a burst of interest at the beginning of October. (You can match the chart against this timeline).

One of the Appinion’s stunning facts: GamerGate is more talked about than online privacy. That means it has officially become a culture war.

“That’s a pretty huge amount of attention being paid to the topic,” said Jonah Bliss, the director of marketing at Appinions in New York.

At that time, Intel accidentally gave the issue a new life on Oct. 3 when it pulled advertising from game developer news site Gamasutra. The world’s largest chip maker had received complaints from #GamerGate supporters about a pro-feminist column by writer Leigh Alexander. Intel then had to apologize for that act, which was interpreted as company aligning itself with anti-feminist trolls. Then game developer Brianna Wu was driven out of her home on Oct. 10 after receiving death threats for speaking out in support of women in games. On Oct. 14, Anita Sarkeesian, the maker of the feminist “Tropes vs Video Games” series and a prime target of the #GamerGate movement, had to cancel a talk after the venue received a threat of a mass shooting. The New York Times also covered the controversy on its front page, and CNN weighed in as well.

That was when the upward part of the curve on mainstream awareness began, according to Appinions. Last week, actress Felicia Day spoke out about #GamerGate, and then her personal details were posted on the Internet in a harassment practice known as doxxing. Many women in the controversy have been doxxed, and some have remained silent because of that, as Day pointed out.

And last night, the controversy went into the stratosphere as feminist critic Sarkeesian made an appearance on The Colbert Report. In that appearance, Sarkeesian communicated her stance about sexism in games and described how she has been harassed for speaking out. 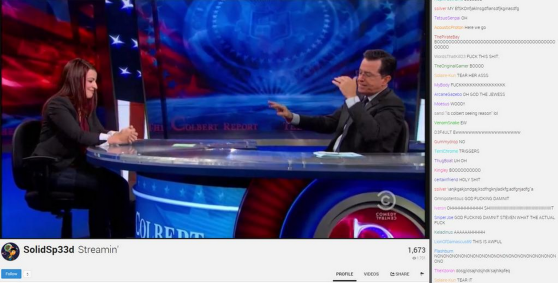 Above: GamerGate people reacting to Anita Sarkeesian on “The Colbert Report.”

Zoe Quinn, a female game developer whose ex-lover started the controversy by revealing her romantic relationship with game journalist Nathan Grayson, has now called out for game publishers and industry figures to “stand up and condemn” the #GamerGate harassers. The biggest game companies have remained silent, while trade groups have condemned the harassment. Adobe has stepped forward as the first company to dissociate itself with anything to do with #GamerGate.

Each piece of news, and sadly, each new harassment, keeps #GamerGate in the news. Newsweek asked BrandWatch, a social media analytics company, to look through 2 million tweets about GamerGate since Sept. 1. In a sample survey, BrandWatch found that the female figures in the controversy — Quinn, Alexander, and Sarkeesian — received far more attention than the male game figures such as Grayson or editor Stephen Totilo of the game news site Kotaku. The women also received more negative tweets than the males. Newsweek may have over-reached with its data, but it is pretty clear that the women are receiving a lot of abusive comments.

Appinions also found that there was a rising trend for negative mentions with the names Anita Sarkeesian and Zoe Quinn. It found, for instance, a steady rise in the use of the names with epithets such as “slut,” “die,” and other insults. And another interesting fact: Of the total people talking about GamerGate, only 5 percent talked about Quinn, while 12 percent talked about Sarkeesian.

“Any discussion regarding Anita and Zoe almost always has to do with #Gamergate,” Bliss said. ” Any other mentions of their merits, Anita’s standalone work on feminism, Zoe’s videogame, etc. has been totally consumed by their involvement in this whole crisis.”

The sentiment about #GamerGate is consistently negative, according to Appinions. 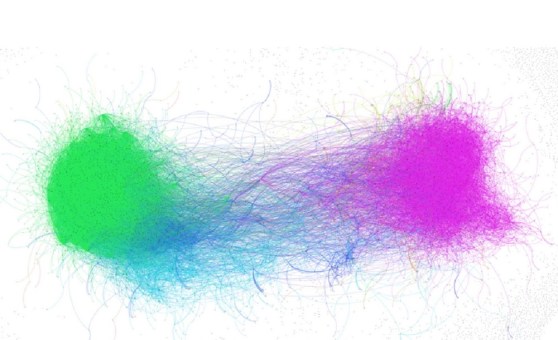 Above: GamerGate tweets: Green is pro-GamerGate, purple is anti-GamerGate. Blue is in between.

Many of the vocal people on Twitter used pseudonymous accounts that were created in the last month, according to a study of three days of tweets from last week by Andy Baio.

So far, the big data analysis, and the biggest headlines around the doxxing of women like Felicia Day, who has 2.3 million followers on Twitter, are discrediting the notion that #GamerGate is mostly about game journalism ethics. Day’s post went further into the mainstream over the discussions it inspired. For instance, former punter Chris Kluwe, who championed gaming during his NFL days, condemned Day’s doxxing and started his own flame war with #GamerGate supporters.

I would be happy to see #GamerGate go away, and I think much of the game industry feels the same way. But the cycle of news keeps pushing it higher. As that happens, it is becoming more and more about just one issue, the harassment of women. Ironically, Colbert, the fake journalist and comedian, hit the nail on the coffin in framing #GamerGate as something that was truly ridiculous. I think we can all agree that harassment has to stop. There may be a conversation to have after that. But for now, I think everyone who cares about #GamerGate should take a stance on the contradictory expectation that it is not going to go away — and that taking a stance is really the way to end it.