I was tempted to stay in Canada, but alas I just returned from a whirlwind trip that left me a little more in touch with the pulse of game development.

For the second year in a row, I attended the Montreal International Game Summit. The event drew more than 2,400 people across 90 sessions. The closing talks, where prominent developers speak for five minutes each in a session dubbed the MIGS Brain Dump 2016, captured the zeitgeist of game development. The idea was to get some smart people on stage and force them to crystallize their thoughts in lightning sessions.

This year’s theme was “What no one tells you.” The speakers included Adam Boyes, Aleissia Laidacker, Anna Kipnis, David Calvo, Jason Kim, Jill Murray, Richard Dansky, Richard Rouse III, and Steve Escalante. I’ve summarized five of the talks below, and I’ll cover the rest later. I hope you enjoy them. (Here are my stories on last year’s talks, part one and part two). 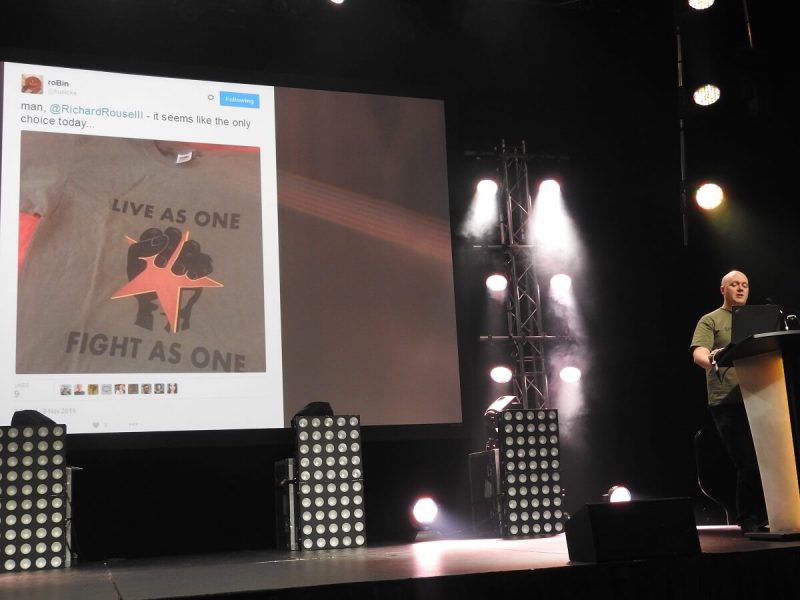 Above: Richard Rouse III of Paranoid Productions at MIGS 2016.

Rouse is an American game developer who said he was sad about Trump’s election. “The election happened and that pretty much wrecked the rest of the week for me,” Rouse said. He was worried about the planet looking like a dystopian wasteland.

“Getting back to work was hard for some of us last week,” he said. “I know a lot of game developers who felt this way. We make video games that are supposed to be fun. It hardly seems important at a time like this. When big things happen in the world that appear to be catastrophic, it’s natural to question what we do.”

Then his friend Robin Hunicke shared an image from Rouse’s game that said, “Live as one, fight as one.” That turned him around, and he thought about how games can tell us a lot about the world.

“Games are systems and life is a system, and you can learn a lot systems of life from the systems of games,” he said. “I was able to get back to work on these silly video games again. There is nothing wrong with escapism and pure entertainment. That’s great. But our games can be very meaningful to people. I know games can be more than pure entertainment. They can help us understand life. Games are what I know how to make, and that motivates me to keep going.” 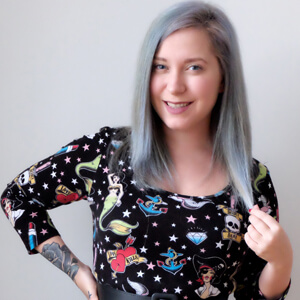 She said that game development isn’t always the “land of rainbows and unicorns that we wish it would be.” She said that simple ideas have a way of becoming too complex. She also said conception isn’t the “creative walk in the park that I expected.” Brainstorming is hard work, as conception is when nothing is clear and fear and mistrust can spread rapidly. Having mutual trust become so important at those times.

There’s also times when even veteran game developers don’t know what the hell they are doing.

“I’ve often seen seniors fake it until they break it,” she said. “Asking for help and relying on those around you is key no matter how many years of help you have.” She also said that game development is unexpectedly social, as you have to talk to everybody across the studio to get in sync.

She noted that game developers, like true artists, should be inspired from different media to develop innovations in games. She looks to Black Mirror and Westworld, interactive theater, and board games like The Resistance, to get inspiration. Lastly, she said she has decided that she can be herself, and that she can own who she is, particularly in a place where she has support from others.

“Help those around you by creating a safe space,” she said. “That supports uniqueness. A place where people can express themselves without fear. Only then can we truly make amazing, innovative games, with amazing people and hopefully have a little bit of that magic, unicorns, and rainbows.” 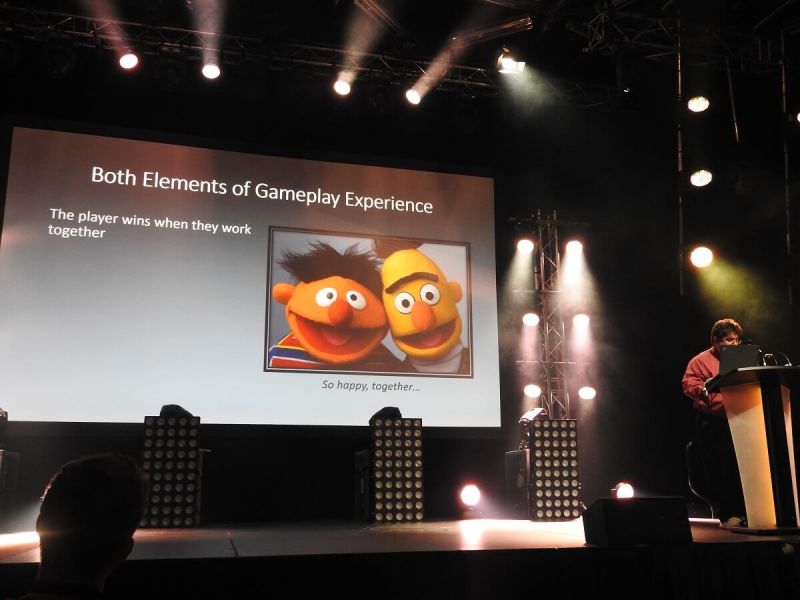 Dansky was the lead writer on The Division, among other works.

More seriously, he said, “Nobody told me that narrative and gameplay can’t get along.” When he started, there was a view that story and gameplay were two different things, and they couldn’t coexist. He learned over time that it was a false dichotomy. Narrative generates emotional investment, it invites more play, and it provides a reward for players who want to advance the story. But it’s also no fun to simply watch a scene unfold, rather than play it.

“You don’t have to pick one or the other,” he said. “Each can allow space for the other.”

You can get a deeper emotional investment in characters and shoot everybody who threatens them, he said.

In a lot of years, “this year is moment zero,” Dansky said, as he’s seen great stories in games from Telltale, and action titles like Mafia III, and Titanfall 2.

“This means that decisions shouldn’t be made on a versus basis,” he said. 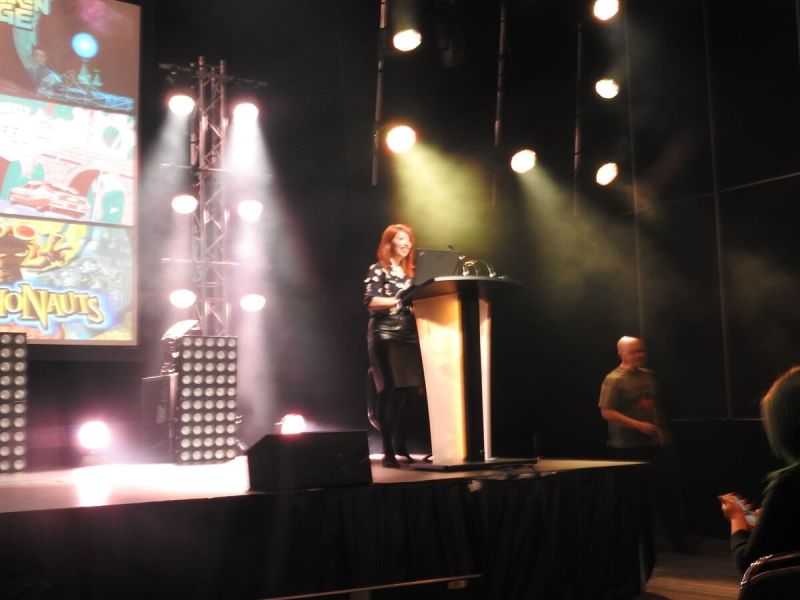 Kipnis talked about growing up in the USSR in Ukraine, where her parents often had dinner parties. Her job as the oldest kid was to make up games that the rest of the kids played. She came to the U.S. in 1989 and tried out Super Mario Bros. on the Nintendo Entertainment System. She wanted to become a game developer, even though marketing for games was driving women away. But she drew inspiration from female game designers like Roberta Williams, creator of King’s Quest.

“These women showed that women can do great work and lead projects in the game industry and it made me feel I could do that too,” she said.

But, 14 years after she started in games, she is disappointed at the slow progress and wants more women to become the creators of games.

“It is up to us, the current generation of game developers, to change this trajectory,” Kipnis said. “We need to make it part of the narrative of the game industry that women are capable game developers known for master works.”

The studio where she works, Double Fine Productions, holds a game jam every year for two weeks. Many of the games that Double Fine has published were created during the Amnesia Fortnight game jams. In 2012, Double Fine opened the process up to the public to vote on the ideas. In 2014, Kipnis pitched a game called Dear Leader, and the voters rated it as the best idea. Kipnis felt she should have pitched earlier, but she held herself back. She didn’t think her ideas were fleshed out enough to pitch to anyone.

“This is a terrible reason not to make your own game,” she said. Kipnis’ suggestions to change this include encouragement and widening involvement in the creative process. 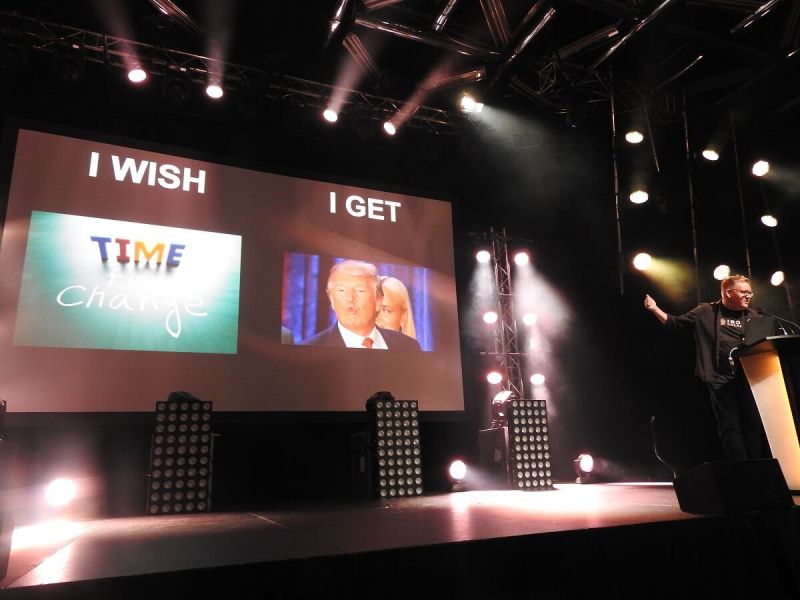 Boyes gave the funniest of talk of the bunch. His talk was entitled “Be careful what you wish for,” with a bunch of slides that showed an image of what he wished for and what he actually got. He noted everyone has a dream, and he said this talk was the antithesis of the inspiring talk he gave about the gold rush.

“Your dreams are fucked,” he said. He noted how he wished for and got a puppy. He got one that ate the chocolate in a Christmas present, puked everywhere, and then ate the puke. Then the dog puked again, and the cat ate the puke. Taking this bad luck to gaming, he noted that you can get on a dream game development project, and then find out that the “code base is horse shit. Your dreams are crushed.”

Then you wish you were the boss, he said. Then you have to coach someone through a divorce. You have to give people raises or tell them why they’re not getting one. Leadership is lonely, he said. You can sell your game company for billions, and you wind up isolated. You wish for something new, he said, and “then you get this chucklefuck.” Dream big, he said, but be prepared, “because shit’s hard.”