The Nintendo Switch revelation video was only three minutes long, but it gave us all a lot to talk about. To me, it seemed like Nintendo was going after the gaps in the game business and the seams between product categories and audiences. It has a modular design for the console and the controller, which allows it to be adapted to new use cases.

It was no surprise that the company went with a hybrid home console and portable tablet because that is part of the original vision that it failed to execute with the Wii U, which had a tablet that only worked in range of the console. Nintendo sees a part of the market between console owners and mobile device players that it can go after, as many players are torn between home play and mobile play. In this case, you can take the same machine and the same game and continue playing it wherever you are. Those of us on busy schedules might actually have a chance to finish a game, while in transit or at home.

This is a gap that neither Microsoft — which is failing in mobile — nor Sony — which also fumbled with the PlayStation Vita — can fulfill. And it’s high time that Nintendo starting hitting back at the makers of smartphones and tablets.

I think that Nintendo has a shot at success with this target, much more so than it had with the 2012 launch of the Wii U console. But it has to make sure that its processor is powerful enough to serve both markets. It has to achieve good battery life for its tablet, and it has to have great content ready for the platform on day one. It should also nail a great online experience, something that Nintendo has been weak at in the past.

“Nintendo Switch appears to be the best integration to date of the portable game console and the home entertainment system,” said longtime game analyst Billy Pidgeon, in an email. “It will be the first handheld gaming system that can provide not only lean-in mobile gameplay on the device screen, but also lean-back living room gameplay on the television screen.”

The Switch should use the cloud 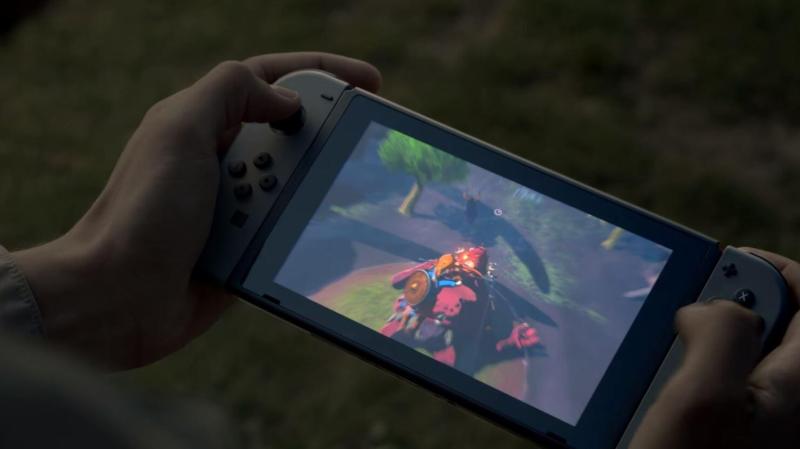 I also think that gameplay streaming should also be part of the solution. Rather than port games to the Switch, Nintendo could use a partner to run them in the cloud and stream the gameplay to the Switch. That way, it could build a massive library of games that are available on other platforms and then run them on the Switch for the first time. It could also run older Nintendo games on the Switch, even though Nintendo is moving from x86 to ARM.

Moving from a TV-based game to a portable tablet version of that game should be seamless. Gameplay streaming is a tough problem to solve, but in the age of Amazon web services, plenty of partners should be available to do this for Nintendo. This streaming of cloud games could help Nintendo address a problem that it has had for a couple of generations now: not enough variety of content.

Going with Nvidia tells us a lot 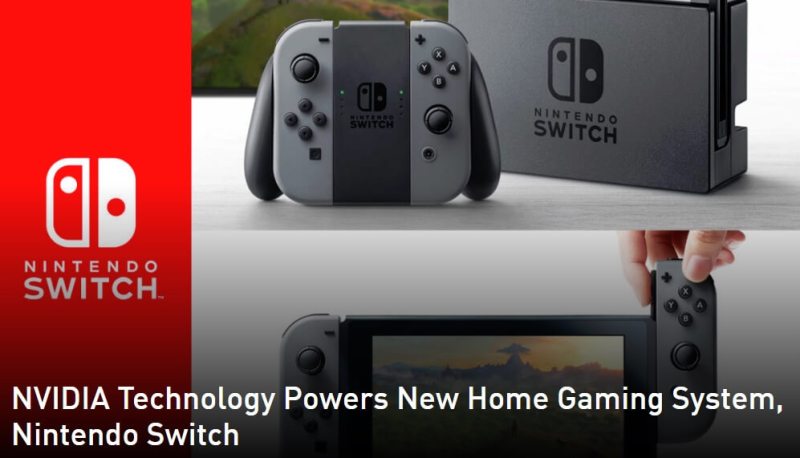 Nvidia has been itching to get back into the consoles ever since it parted ways with Microsoft and Sony. Nvidia provided the graphics chips for the original Xbox, and it got its graphics chips into the PlayStation 3. But Advanced Micro Devices swept the last round, capturing all three console makers with its accelerated processing units (APUs), which combined a microprocessor and graphics on the same chip.

This time, Nvidia has its Tegra processors (which are like ARM-based APUs, with a low-power processor and, presumably, Pascal-based graphics) that it can customize for Nintendo. These devices are WiFi connected, but they could also include 4G mobile data connectivity. The Pascal graphics architecture, which Nvidia launched this summer, is a very low-power technology that could work well in a portable tablet. By the time that the Switch comes out in March, Nvidia may have a lower-cost, lower-power version of its custom Tegra available.

That means that Nintendo will likely be able to price its machine in the $250 to $300 range, well below the price of rival consoles. Nvidia’s tech can display 4K graphics on a TV, as the Nvidia Shield can do so today. Yet Nvidia’s Shield hasn’t been a success because it just doesn’t have the same high-quality content available as Nintendo does in its portfolio. Nvidia has a huge gap in its product line, and the partnership with Nintendo fills that gap.

But it’s not likely to be enough horsepower to outdo Microsoft’s 6-teraflop Project Scorpio machine, which is coming in the fall of 2017, nor would it likely beat Sony on the high end. This lower performance, lower price band is the gap that Nintendo has occupied with the past two generations of the Wii U and Wii consoles. It’s smart to go after this gap, as long as you execute well.

Nvidia said it has already put 500 engineer-years into the design, working on everything from computer architecture to the design of peripherals. The end result, Nvidia said, is “The first true home gaming system you can take anywhere – with a seamless transition between docked and undocked states.”

The target market appears to be teens and young adults. Nintendo has lost many of its 3DS portable customers to Apple and Google smartphones. With the Nvidia Tegra chips, the Switch will probably run a version of Android. But I don’t think Nintendo will allow a ton of Android games to pollute what is usually a curated platform. Young kids are growing up with iPhones, not Nintendo machines. If you look at the video, you don’t see a single kid in it, as my boss Jason Wilson noticed. Instead, Nintendo is going after young urban professionals who are always on the run.

Many of us don’t have time to game on the TV as much as we once did. So now, with this Switch, we’ll be able to play at home for a bit and continue playing while on the run. That’s a market niche that nobody else is targeting, whether it’s the rival console makers or the smartphone and tablet makers. Sure, some have tried, as did Nvidia itself with the Shield console. But if someone can execute well, catering to this mobile lifestyle, the rewards could be huge.

Nintendo also showed its interest in esports and recruiting die-hard spectators for its platform.

Why is Nintendo talking about this now? 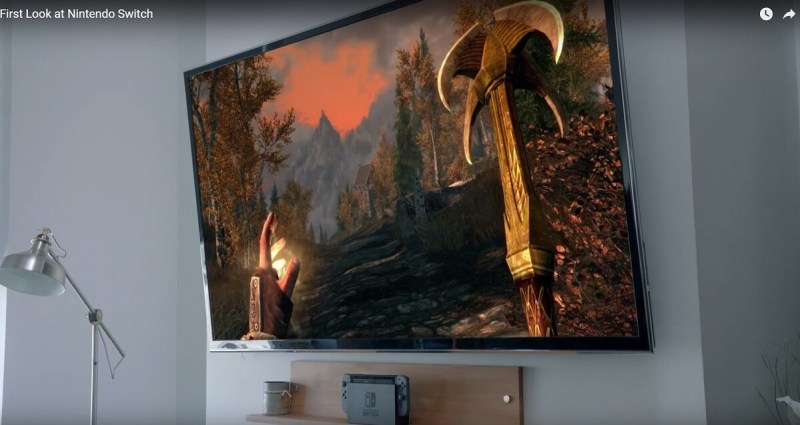 Above: Skyrim running on the Switch while it is docked.

It has to tell developers how to make games for the launch, which is only six months away. Presumably, it has been secretly working on getting software partners, and indeed it has announced partners such as Bethesda Softworks, 2K Games, and Ubisoft. Nintendo can supply a lot of its own first-party games such as Mario Kart, Zelda, Mario, and Splatoon. But to have a healthy ecosystem, it needs third parties.

Nintendo has other business reasons to announce before the holidays. Microsoft has launched its updated version of its console, the Xbox One S, and Sony is coming out with both the PlayStation VR and the PlayStation 4 Pro console. Both are 4K machines that could motivate gamers to upgrade. Nintendo doesn’t want that to happen since the money they spend on consoles this holiday will not be spent on a console next spring. Sadly, Nintendo didn’t yet drop the hammer on Sony and Microsoft. It didn’t disclose the price and say that you could preorder this machine right now.

Does Nintendo have a winner on its hands?

I’m detecting a lot of excitement about this machine, which is saying a lot compared to the tepid response to the Wii U when it was announced. The YouTube video’s stats are by no means a scientific sample, but the video below has 7 million views in one day, with 295,000 thumbs-up votes and 10,600 thumbs down. Nintendo’s stock price initially rose yesterday, and then it closed lower.

“Early indications are that reaction to Switch is positive and could help Nintendo regain some lost momentum in the game market,” said Brian Blau, gaming analyst at Gartner, in an email.

Nintendo has kept us waiting for a long time, as we knew early on that the Wii U was a failed console. This time, Nintendo could get something cool into the market with technology that is adequate enough to really execute on the vision behind the Wii U: a world of hybrid gaming, anytime anywhere.