When the leaders of Shinra Technologies unveiled Project Flare in November 2013, it was mostly fantasy. And that was no accident, since Shinra’s founder is Yoichi Wada, former chief executive of Square Enix, came from the maker of Final Fantasy game series. Wada has some very fantastic goals for Shinra, and if he succeeds, the accomplishment will be a much bigger deal than selling more than 100 million Final Fantasy games over the years.

And now Shinra is looking a lot more real. If it’s right, then Shinra will prove that the best use of the most powerful supercomputers in the world is, of course, using them for games.

New York-based Shinra showed off its progress on its dream to create a supercomputer in the cloud that can deliver huge games to online gamers. By tapping the power of cloud computers in an efficient way, Shinra wants to offer gaming without limits, allowing developers to create huge worlds that can measure as much 20 miles by 20 miles of virtual space and can host as many as 16,000 unique characters with individual artificial intelligence operating at the same time. That is enough firepower for game developers to recreate insane war scenes like the Battle of the Pelennor Fields in Peter Jackson’s film The Lord of the Rings: The Return of the King. If a developer took full advantage of what Shinra offers, it could create a game that is 17 times the size of the world of the massive fantasy game The Elder Scrolls V: Skyrim.

At the Game Developers Conference in San Francisco last week, Shinra showed a working demo on Nvidia’s latest graphics technology that, when used in servers in the cloud, can now support 64 players with a single graphics card. That’s a big step forward, as it makes cloud gaming more economical. When cloud gaming first kicked off, a high-end graphics card could only support one player. That made the hardware requirements for a cloud-delivered game cost prohibitive.

Shinra renders a game’s graphics, physics, and artificial intelligence in the cloud, and then it streams the appropriate images to the player in real-time. Instead of creating scenes over and over again, Shinra tries to create an asset once and share it over and over again, rather than processing the same asset for every single user in a very computing inefficient way.

It loads the entire world into the supercomputer’s random access memory, so that it is responsive and users don’t experience loading times. Shinra games will have no loading screens, so you can get a seamless and immersive virtual world experience, said Alex Tait, project manager for Shinra Technologies’ Montreal studio, in a presentation at a company event.

“If you want to synchronize this amount of data in an online game, it’s just not possible,” Tait said as he pointed to the simulation on the screen. “It’s only possible because we move all the data into RAM. We can do massive Lord of the Rings-style battles.”

Shinra’s Montreal studio created the demo on a game engine it created from scratch, with middleware such as Shinra Remote Rendering; Bullet, an open-source physics engine; and SpeedTree, which is used to model lots of trees in a forest at once. It used Visual Studio, Maya, and other standard PC game development tools in a relatively short time, Tait said. With a small team, the company created a stunning tech demo in a matter of months, he said.

At the end of the demo, Tait showed a tidal wave moving through the world, as he combined the fluid simulation and deformation simulation at the same time. The wave rippled and interacted with the world in real-time.

“This is not scripted,” he said. “It’s a real tidal wave, based on the physics of the world. It’s only possible because we have crazy hardware, shared across many users. These are the kinds of simulations and new experiences that become possible. They’ve only been in the movies until now. We’ll see them in real-time interaction.”

Shinra now has the support of developers such as Seattle-based Hardsuit Labs, creator of the free-to-play shooter Blacklight Retribution; and Camouflaj, the creator of the stealth action game République for iOS, Android, PC, and Mac. 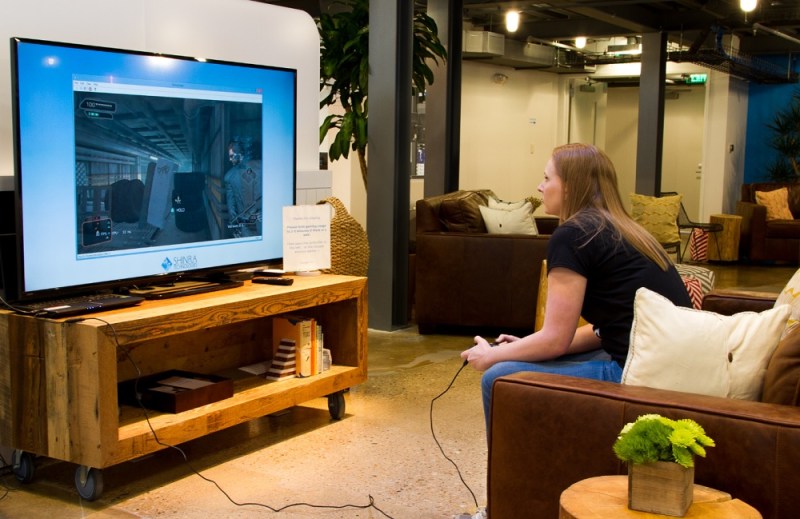 If there’s a building ten miles away, you could send a missile at it and watch it fly and blow the building to bits in real-time, with no delays. In the demo I saw, four players were playing at once, and each had a different view of thousands of balloon-like characters floating in the air and interacting with each other. There were 16,000 of the little mascots, or something like that, as I didn’t count them all. Since the physics is executed in real-time, you can change the map, deforming the terrain of the simulated world. Everybody else playing the game would see the deformations at once. All of the data would be synchronized, Shinra said.

The company packs a lot of hardware into its data centers, or those of its partners, so that gamers can experience a huge game on a humble hardware setup. The company is creating the overall architecture for the virtual supercomputers, dubbed 1:N, and it will bring the technology to market in the future through partners and licensees.

Shinra is conducting a beta test for the game streaming platform in Japan with NTT East and Techorus. The test will give Shinra’s virtual supercomputer prototype access to Japan’s high-speed fiber-optic network, while Techorus will provide the rendering technology that keeps each instance of a cloud game running properly. And it is also doing a beta test in the U.S. in Kansas City, where Google has a high-speed network. 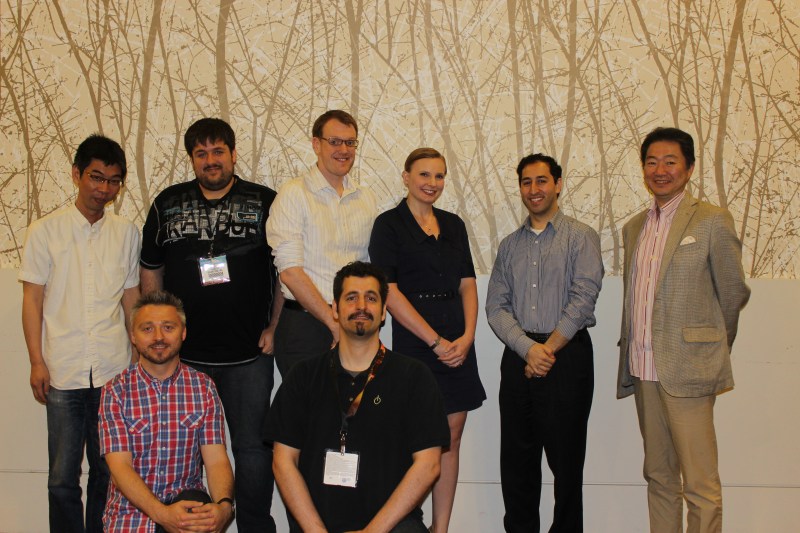 Above: Shinra Technologies’ new team. Yoichi Wada is at right, and Jacob Navok is second from right.

Shinra has come a long way in a short time, and it has done what it promised so far, said Jacob Navok, senior vice president of Shinra, in an interview with GamesBeat.

“We want to create shared experiences that are only possible with racks of servers in a supercomputer,” Navok said. “Doing the same simulations for multiple users over and over is difficult. It limits the complexity of a simulation. It limits the number of players you can have. We aggregate users, share calculations and data between users, and we generate economies of scale across many users. Our cost per user goes down as we add more users. That’s a huge advantage.”

So what kind of thing is possible? Navok said that it might actually not be that engaging to be a single soldier in a giant Lord of the Rings battle. But he suggested something different, like a Hunger Games arena where players were fighting each other, gladiator style. The crowd of thousands watching the game could be a real crowd of gamers, like e-sports fans watching a match. They could vote thumbs up or thumbs down on the gladiators. If you sponsor a player, you could send them a gift like a weapon in the middle of the battle. The spectators could thus affect the outcome of the game within a game. That’s very imaginative.

Shinra is going to have competition. Nvidia, for now, is making a very different kind of user of supercomputing power in the cloud with its Grid service, which will power a real-time game streaming service for the Nvidia Shield set-top box, announced at GDC. And Shinra will have a competitor in Improbable, a stealthy rival based in Cambridge, England. Navok said he believes Shinra shares a common vision with Improbable.

“You’ll see more announcements for content under development in the future,” Navok said.

These companies will face skeptical press, investors, game makers, and gamers for years ahead. Everyone has heard the promises of cloud gaming for years. But if they keep on delivering, inch by inch, we’ll going to have some jolly fun games to play in the future. 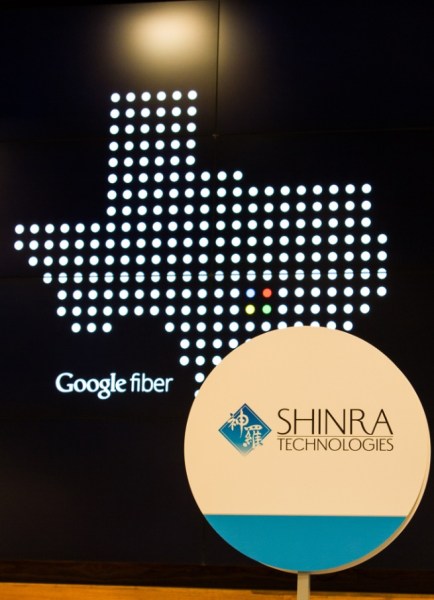