“In games deal making, there’s Tencent, then there’s everyone else,” Digi-Capital said in a post. In some ways, that’s alarming, particularly if it turns out that national borders matter when it comes to creating jobs and economies in the game industry. In other ways, it shows just how global games have become, and it’s a sign of progress that games are creating so much value in the world.

Tencent accounted for over $4 of every $10 invested in games companies worldwide in the last 12 months through the first quarter of 2018. It was involved either sell-side or buy-side in over three-quarters of all games mergers and acquisitions in the same period. All told, $2.1 billion was invested in games in the first quarter, and $14.4 billion was spent on acquisitions.

“Funny thing is I forecast this all the way back in 2010, before most folks outside China had heard of the company,” said Tim Merel, managing director at Digi-Capital, in an email. “They were impressive then, but now they’re on another level.” 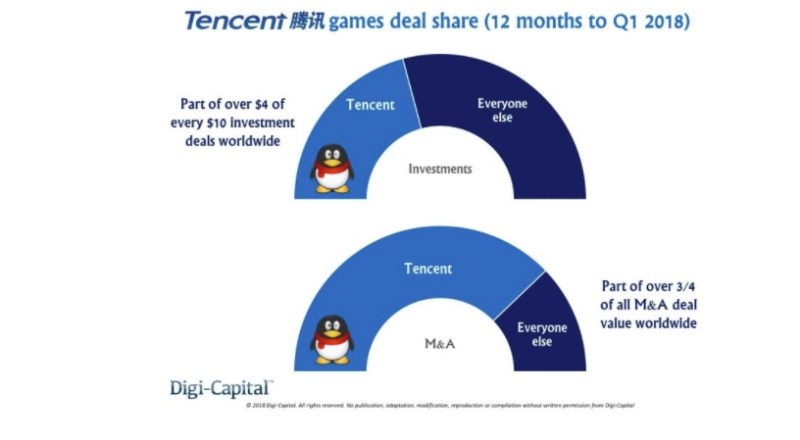 Above: Tencent accounted for a lot of gaming deals in the past year.

Even if you’ve been following Tencent’s growth over the past few years, that’s pretty breathtaking. In 2017, China was the world’s biggest game market, edging out North America with a total of $27.5 billion in revenues, or 25 percent of the whole market, according to market researcher Newzoo. And the majority of Tencent’s revenue comes from gaming now. Tencent’s game revenues in 2017 were $12.7 billion, up 44 percent. That compared to $6.6 billion in revenue for the next closest competitor, Sony.

At our GamesBeat Summit 2018 conference earlier this month, I pointed out that we like to cover the game industry at the low level, such as individual investments. But we also like to go to the high level, pulling up to get some strategic zoom on the global landscape. At this level, Tencent’s moves are very visibile, alongside sweeping changes such as the arrival of battle royale games and the cascading revolutions of blockchain, augmented reality, and artificial intelligence. It is on this highest strategic level of the industry that we can see the awesome might of Tencent and China. 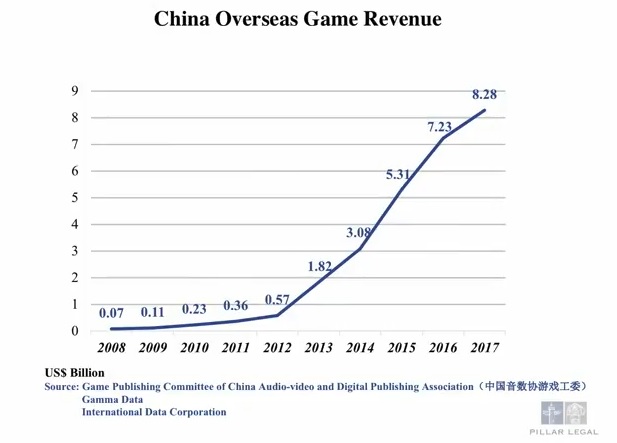 Above: Chinese overseas game revenues have skyrocketed in the past decade.

China’s role in the global stage was a subject at our event. Greg Pilarowski, founder of Pillar Legal and a lawyer who spent the last 12 years in China, noted how much Chinese companies have grown. In 2008, China’s overseas game sales were $70 million. In 2017, it was $8 billion. China’s game market grew from $2.95 billion in 2008 to $32.3 billion in 2017, according to market researcher IDC.

Pilarowski pointed out that, in the context of a potential trade war, gaming has some inequities. Chinese game companies are free to launch games in the U.S. and sell directly to consumers. But in China, U.S. companies have to establish joint ventures with Chinese companies first and share revenues with them. 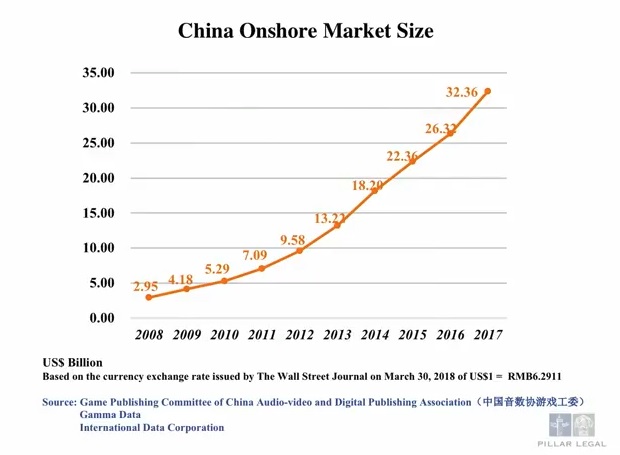 “In our industry, in the game industry, launching China games in the U.S., buying game companies in the West, doing self operations in the U.S., if that is flipped around, U.S. companies are not allowed to do any of that in China,” Pilarowski said. “Perhaps because the China market is completely protected, that gave rise to a company like Tencent, and now the profits from that market are being used to compete with foreign companies in their own markets.”

If Donald Trump wants to proceed with his trade war with China, he might very well choose to target games. The Chinese government, on the other hand, isn’t hell bent on getting the Chinese companies to expand without restraints. It has asked the Chinese companies to limit their games in the name of curbing addiction, it censors games for political reasons, and it has discouraged investments into games by companies that don’t currently have game operations.

Within games, Tencent is viewed as an operator with a shrewd understanding of the game business. If it’s winning, it’s because of these smarts.

Randy Lee, head of business development at Tencent, also spoke at our GamesBeat Summit event. He explained how Tencent looks at gaming investments. Over the years, Tencent has invested in big stakes in Epic Games, Glu Mobile, Supercell, Riot Games, Ubisoft, and Activision. That’s a very big list of leaders in the game business. Those businesses helped Tencent grow, but so did its investments in its own market. It brought Smilegate’s Crossfire shooter game to Chinese fans, and it scored huge hits in mobile such as Arena of Valor (known as Honor of Kings in the West). That game is generating billions of dollars in revenue.

“For us, it’s about looking at the game first,” he said. “If the game is great, the ecosystem around that game will work.”

Lee said that the companies operate independently, as Tencent doesn’t want to mess with successful management teams. In other words, the Tencent ownership, and therefore the Chinese ownership, isn’t really obvious at the Western companies. Lee also believes that Western games such as PUBG are going to do very well in Chinese markets, and so the flow of money in the industry isn’t only one way.

As far as I’ve seen, the game industry is welcoming the financial clout that Tencent is bringing to games. When the news broke that Tencent had bought out the 25 percent stake that Vivendi held in Ubisoft, it was greeted with relief. I happened to be at a party that the Entertainment Software Association, the U.S. game industry’s lobbying group, threw for charities on that particular day. It’s safe to say that Western executives greeted Tencent’s investment — which prevented a hostile takeover of Ubisoft — with a sigh of relief. As Tencent rides into the game industry, it is being viewed as a white knight.

I’m not sure what to conclude about Tencent’s growth and China’s domination of games in the coming years. But for now, I’ll just say, “Wow.”