Some people are freaking out about net neutrality right now. Me, I’m deciding where to put my holiday play time. Will it be Wolfenstein II: The New Colossus, Star Wars: Battlefront II, or Call of Duty: WWII?

The best answer, of course, is to play all three of the recently launched first-person shooter games. I’ve completed the single-player campaigns of each title, and they’re all reasonably good. But not everybody is going to pour all that time into each campaign and then play the games on multiplayer as well. Hopefully, I can help sort this dilemma.

First, Wolfenstein II’s single-player campaign is the best of the three, but the game has no multiplayer combat. It will take you a dozen or so hours to play the 11 main missions in the Wolfenstein II campaign. If you have a hard time with the battles, or if you take  a stealth approach, then it will take even longer. And you have 16 Uberkommandant missions that you can pursue to hunt down more Nazis after you finish the main campaign.

I’m worried that Wolfenstein II will be the loser here, caught between two giant games, just as Titanfall 2 was squished last year between Call of Duty: Infinite Warfare and Battlefield 1. But that would be a shame. Wolfenstein II offers a creative vision about what would happen if the Nazis won World War II. The first game, Wolfenstein: The New Order, had you fighting as William “B.J.” Blazkowicz, who fell asleep like Rip van Winkle for 14 years, awaking to a Nazi world empire in 1960. 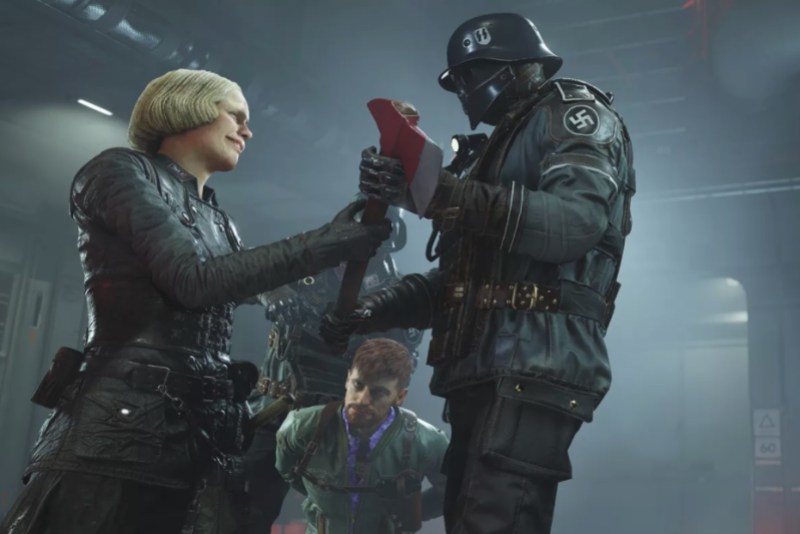 Above: Frau Engel has been promoted to a general in Wolfenstein II.

With the sequel, you’re back to fighting Frau Irene Engel, the antagonist whose performance in the first game reminded me of a scene from Inglorious Basterds. (I’ve learned to never believe a video game character is dead until you slice the character’s head off and chop it into a bunch of pieces). She’s back, horribly scarred from her first encounter with Blazkowicz and even more out of control now that America’s resistance has been nearly crushed.

Wolfenstein has what Call of Duty: WWII and Battlefront II don’t have. A real villain that you can hate. It’s not enough just to have Nazis or, ahem, Stormtroopers to eliminate. It keeps you engaged and immersed in the story of starting a new American Revolution to overthrow the Nazis. I enjoyed the three hours or so of cutscenes because they were filled with the desperate struggle of a ragtag group of survivors battling the evil of Frau Engel and her mechanical minions. 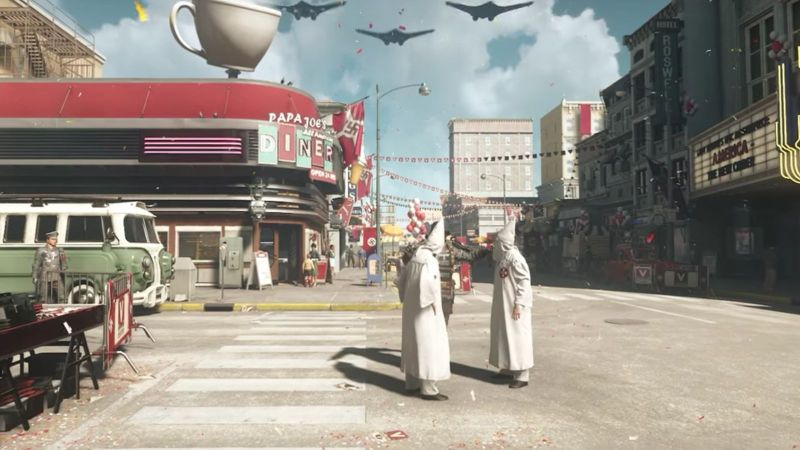 Above: Wolfenstein 2: The New Colossus didn’t make the top 10 in its debut month.

Wolfenstein II was also unintentionally relevant in 2017, when Nazis were marching on the streets in the U.S. I was struck by the imagery — created by the team at Machine Games in Sweden — of the KKK marching openly in the streets of a town in Nazified America, where the population obediently followed the new conquerors. It is also undeniably the best shooter game of the three, with powerful guns matched against powerful enemies. Because Wolfenstein is set in an alternate universe, it is rife with mechanical nightmares and creative weapons that are just barely powerful enough to get you through firefights.

My favorite moments included a hilarious scene where Sigrun Engel was having a quickie in a submersible, as well as a later scene where she insists that, despite being a German and despite being the daughter of a villain, that she wasn’t a Nazi. The scenes with Blazkowicz’s father also shed light on B.J.’s character, and many firefights that were riveting, including one that follows an encounter with a very special villain. The ending also has some nice touches that close the loop on story threads that seemed like they were distractions earlier in the game.

I’m glad that Wolfenstein II took a crack at humor, but a few moments were too over the top, making me wonder if it was, after all, a game with a serious commentary on society or not. I only wish I didn’t have to spend so much time on a giant submarine.

Sadly, Wolfenstein II was off to a slow start at U.S. retailers when it debuted on October 27. By contrast, Call of Duty: WWII had a tremendous launch with $500 million in sales in its first weekend, doubling the amount generated in the first few days of sales for Call of Duty: Infinite Warfare in 2016. This Call of Duty takes us back to the beginning, and reminds us why we liked the series, which has generated more than $15 billion since 2003. 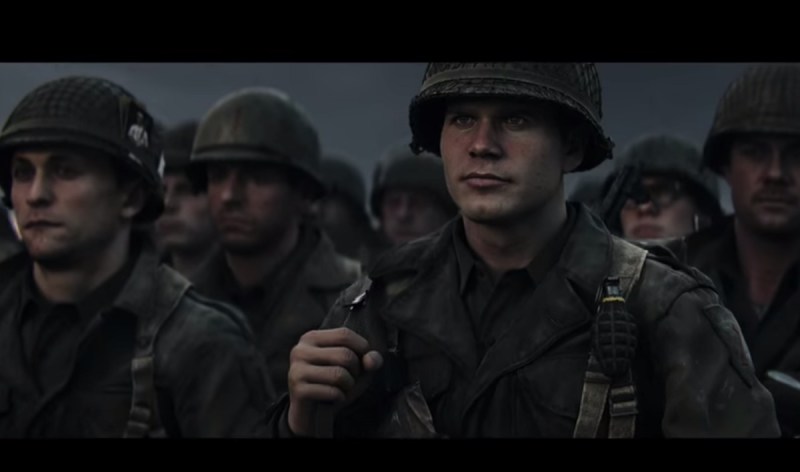 Above: Call of Duty: WWII will take you back into history.

Sledgehammer Games paid its respects to the sacrifices of our World War II veterans, who sadly aren’t around to tell their stories in so vivid a manner anymore. The single-player campaign tells a moving story of what it takes to live up to the notion of brotherhood. The blood brothers of the squad make sacrifices for each other, and the story has a personal touch that reflects the storytelling chops of Sledgehammer’s developers, who delivered games such as Dead Space in the past.

WWII has a dozen missions that also take about a dozen hours to play, plus you get multiplayer and the Nazi Zombies co-op mode. I’ve hit level 35 (out of 55) in Call of Duty multiplayer. My kill/death ratio is 0.62. That’s the best in years for me. But currently 3.6 million people are ranked higher than me. I have some work to do get better. But I’m encouraged because the multiplayer gets easier once you unlock better weapons components such as a full metal jacket bullet. (My best round, by the way, is below).

My favorite multiplayer battle modes are Team Deathmatch and War. The latter is a four-part battle where you have to take some objectives, like overtaking a manor and building a bridge, in a battle with a team that is determined to stop you. It was just the kind of game for those complaining about Call of Duty battle fatigue. I noted a distinct mismatch in the tone between the single-player campaign, which is all about respecting sacrifices, and the multiplayer campaign, which is like an esport. 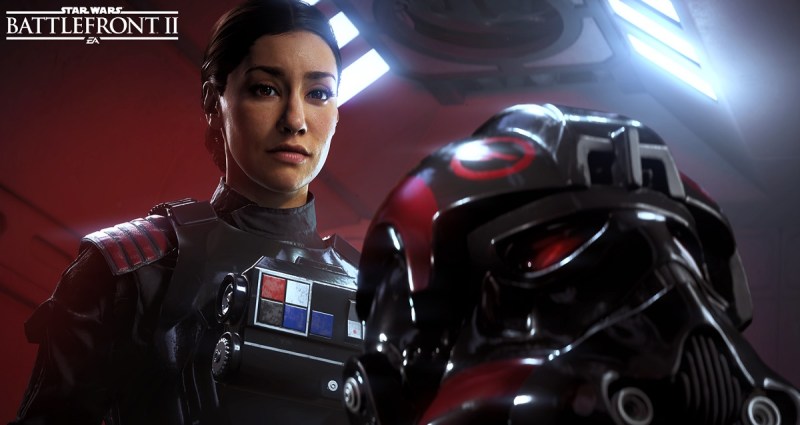 Above: Iden Versio, the Imperial agent you play as in Battlefront II.

The jury remains out on how well Battlefront II will do, since EA shot itself in the foot on its loot box strategy. Battlefront II’s single-player campaign has 17 missions, but it’s remarkably short compared to the other games. In other words, I didn’t really get stuck in the Battlefront II campaign, as the battles weren’t nearly as challenging to fight. I was finished with the single-player game in a day and a half.

The introduction of Iden Versio, a trooper in the Imperial Special Forces, makes you see the Rebellion from the perspective of the Dark Side. She is an interesting character, and her relationship with her commander and father, Garrick Versio, sets up an interesting confrontation. Iden Versio is on the Gray Side, straddling the line between sympathy for the rebels and duty to the Empire.

But the story doesn’t end in a particularly satisfying way. It is a deeply personal reflection on family, as you find with some of the best Star Wars movies. But it takes some short cuts that make it feel like the story was rushed. I can, for instance, tell that Call of Duty: WWII is a polished game that took three years to make, while Battlefront II certainly seems like it was built by three different studios with only two years to make the whole ambitious game.

Fortunately, Battlefront II has some excellent multiplayer modes. Unlike Call of Duty, where you are limited to fights that are six on six, Battlefront II gives you the chance to play some really big battles, like the 20-versus-20 Galactic Assault and 12-on-12 Starfighter Assault modes. I really enjoy the immersion that you feel as a soldier trying to make a difference in a massive battle. It puts the War mode in WWII to shame. And one of the forgotten bargains of Battlefront II is that the entire year of downloadable content (DLC) will be available for free to people who buy the game. That will become more meaningful as new content from The Last Jedi comes out.

If you’re not going to play all three games, I suggest you play Wolfenstein II first. Call of Duty: WWII is my pick for best multiplayer, and it’s a good second choice for the quality of its single-player campaign. Battlefront II is the game you should play if you’re a Star Wars freak and are pumped up about the pending arrival of Star Wars Episode VIII: The Last Jedi on December 15.

Lastly, I haven’t forgotten about Destiny 2, which also has a good campaign. I’m looking forward to getting back to that game as well. The good thing for gamers: With this selection, you can’t lose. Hopefully we’ll have this kind of competition for a long time to come.