Most of the tech at the Augmented World Expo 2019 event wasn’t about games. But it was still intriguing for me to see the technologies that are coming together that will lead to the next-generation augmented reality, virtual reality, and mixed reality technologies.

Some people have given up on these technologies as the path toward the games of the future. But while consumer VR doesn’t have the best adoption curve, it is moving along at the same rate that society adopted color television, said Stephanie Llamas, an analyst at market researcher SuperData Research. 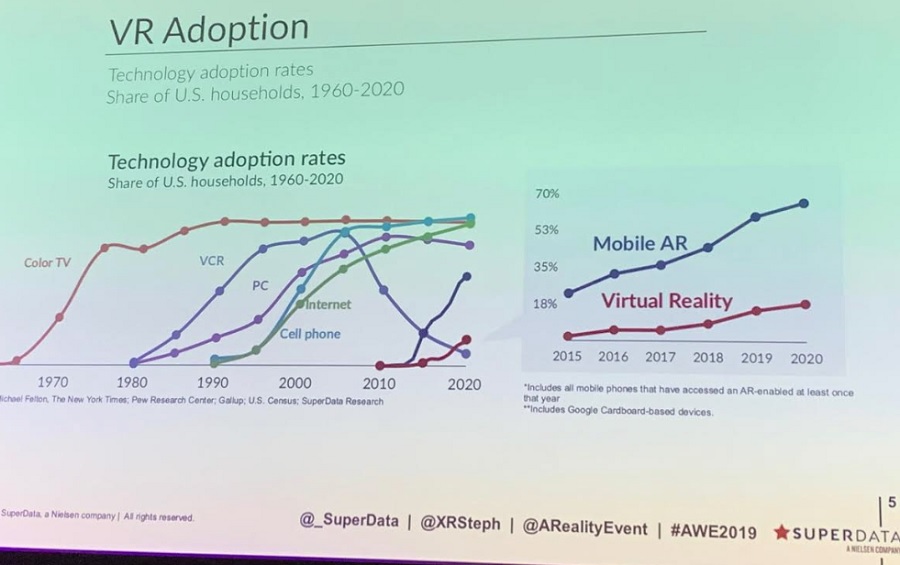 Above: VR is growing as fast as color TV did.

That growth rate is a lot slower than what everybody expected, during the past couple of years of overhyped mania. But it is fast enough to enable the basic technology and the companies creating it to survive and continue to the next generation. 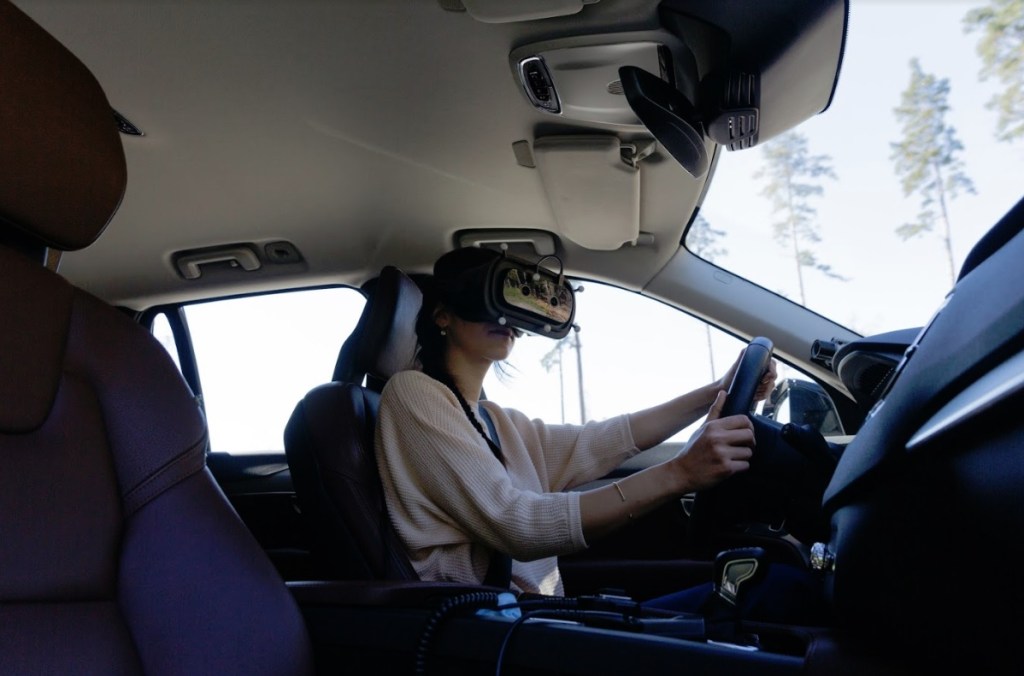 Above: Varjo’s XR-1 headset lets you drive with AR viewing.

If these technologies can find early adopter markets, the companies may be able to last long enough so that they finally deliver on the promise. At AWE, I was happy to see some of that potential as the show at the Santa Clara Convention Center was bigger than ever. Enterprises are beginning to adopt and embrace these technologies, as I saw with Volvo’s investment in AR/VR headset maker Varjo. 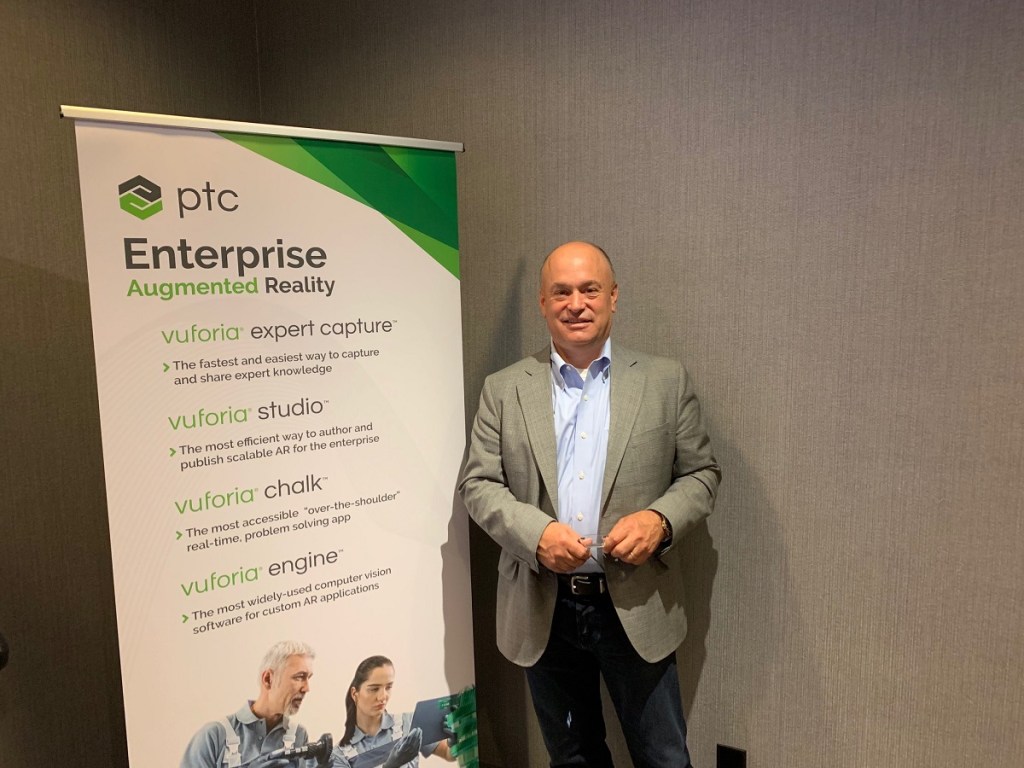 I met with Jim Heppelmann, CEO of PTC, the provider of the AR platform Vuforia, at AWE. He said his company’s AR revenues are about 7% of the total, and it’s growing about 90 percent a year, thanks to enterprise AR adoption for things like training and field work. That growth rate is enough to deliver 6% growth per year to the larger corporation, and it is enough to keep investing in AR.

If big companies like PTC and their big customers in the enterprise carry the torch, then we will see a market for things like Varjo’s amazing XR-1 AR technology, which the company is trying to polish so that an AR headset can be worn while driving a car. The resolution of the headset displays is much better than what is in the market today in the form of Oculus or HTC Vive VR headsets. It has two 12-megapixel cameras that can create images with a resolution of more than 4K per eye.

An enterprise might pay something like $6,000 for this kind of tech. But you can’t sell it to consumers until it costs $300. It takes a lot of spins of Moore’s Law to get to that lower cost.

A lot of companies are pivoting right now, leaving the consumer AR and VR markets and moving into enterprise, location-based entertainment, and the health, education, and industrial markets. 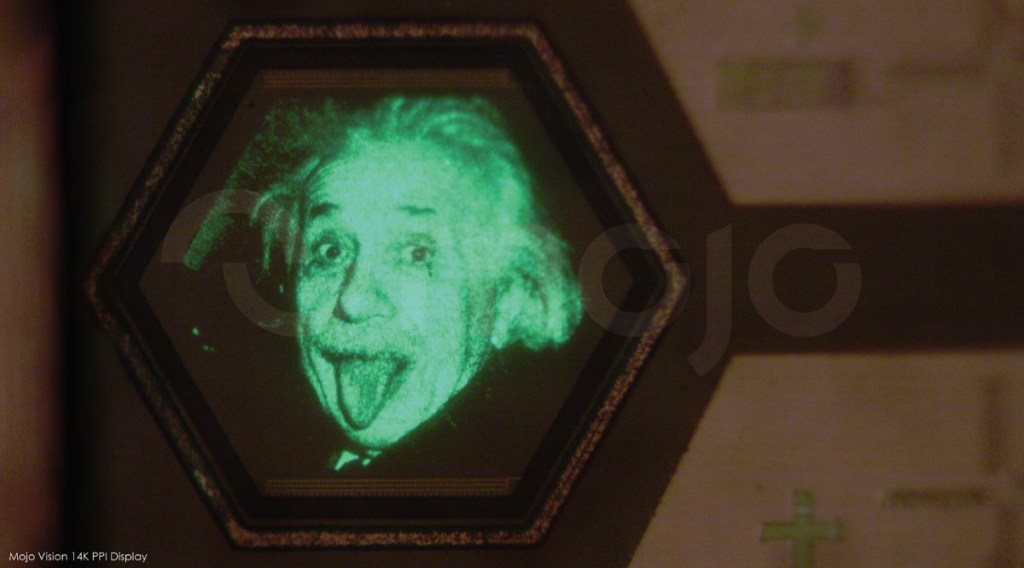 Above: Mojo Vision can create extremely small and dense displays.

But the pieces of the consumer revolution in AR, VR, and mixed reality are visible today. Varjo could no doubt benefit from the tech I saw in a hotel room with the Mojo Vision crew. Under a microscope, I could see a green monochrome image of Rick Astley singing his Never Gonna Give You Up song.

Mojo Vision claims its MicroLED displays can create the smallest and densest pixels ever. The screen makes it a candidate for ultra-small and dense augmented reality and virtual reality displays. The prototype powers tiny pixels, with a pixel density 300 times greater than current smartphone displays. Mojo Vision can put 15 pixels in a space the size of a red blood cell.

MicroLEDs use 10% of the power of current LCD displays, and they have five to 10 times higher brightness than OLEDs. That means that MicroLEDs enable comfortable viewing outdoors. Mojo Vision can create 14,000 pixels per inch, and it can place them near your eyes.

And yet, if you improve the displays so that they make the animations in AR and VR completely believable, you just kick the can down the road a little. Once you have the graphics, you need the haptics (the sense of touch), said Nicole Lazzaro, head of XEO Design and a VR game designer. 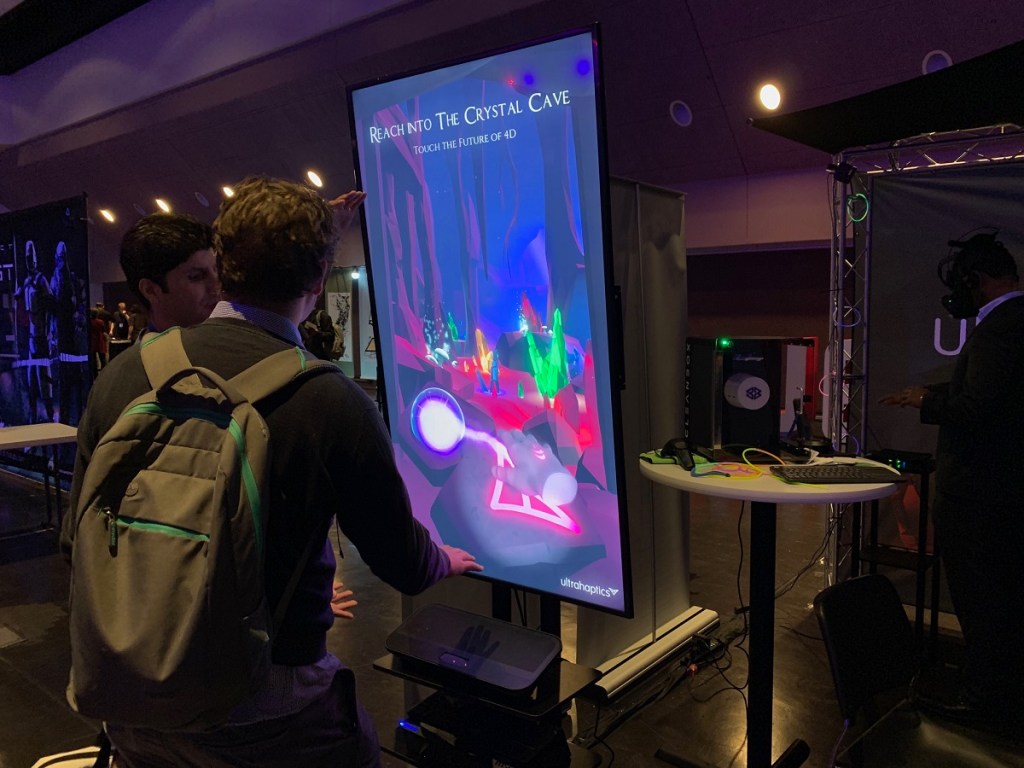 Above: Ultrahaptics and Leap Motion combined their technologies at AWE 2019.

That’s what Ultrahaptics and its newly acquired Leap Motion company were showing at the Playground area of the expo at AWE. I was able to put on a VR headset and move into a fantasy world. I could see my fingers in VR and move them around, thanks to the Leap Motion tech. I put my hand over some animated orbs, and I felt like I was touching something. That was Ultrahaptics’ speaker technology, blowing air upward to make my hands feel the sensation of touching something.

Above: Vadim Kogan shows off the Logitech VR Ink stylus.

That was a kind of magical experience. Another kind of magic came from Logitech, which figured out how to create a stylus, or ink pen, for VR. The company showed a pilot of its Logitech VR Ink, targeted at enterprises. It lets you write in both two dimensions and three dimensions in a VR space. Now you can point at something and create in VR, and hopefully get haptic feedback. 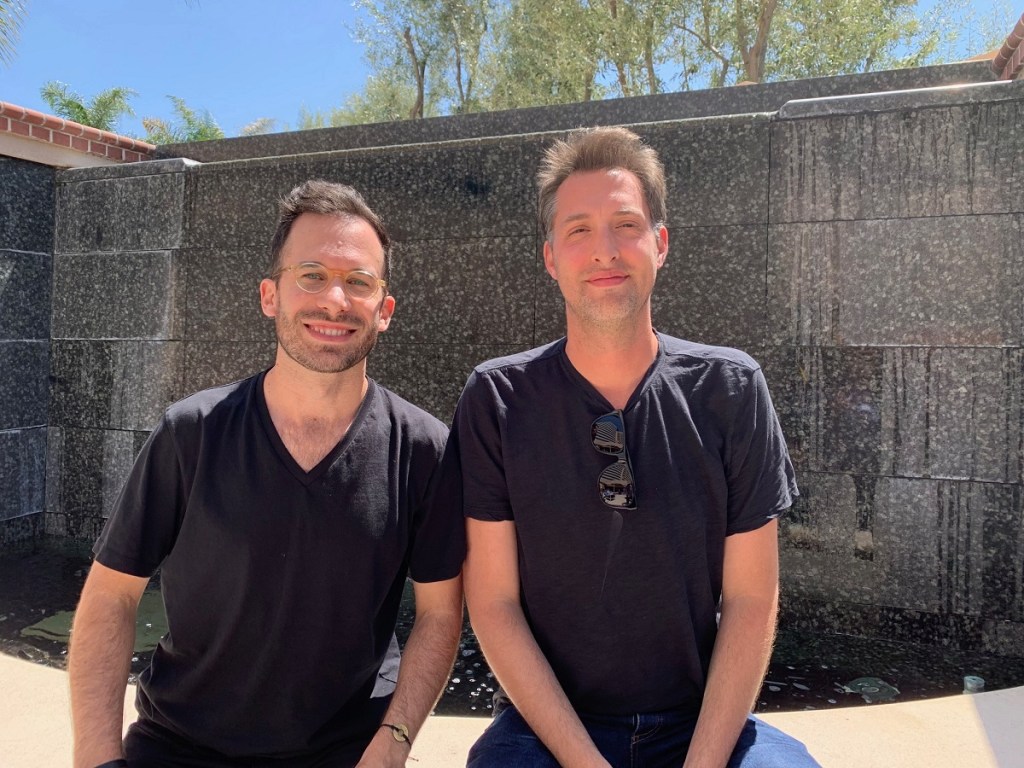 Lastly, the software makers can make use of this technology. And they’re the artists who are just getting started. Ryan Horrigan and Armando Kirwin, the founders of Artie, told me that they are trying to create virtual beings, or digital humans who can be superimposed on the real world in ways that engage with people. They will start with simple smartphone AR first and then eventually get to the technologies that can deliver digital humans in a realistic fashion. 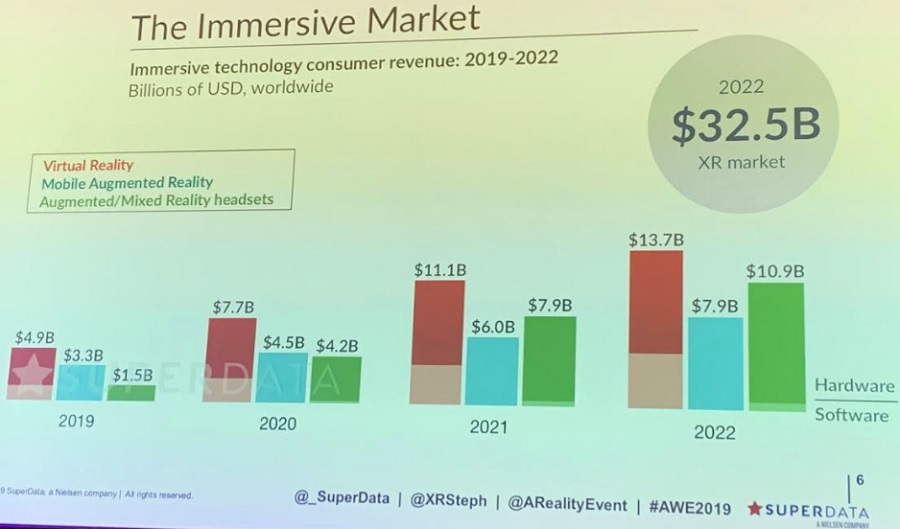 Above: SuperData’s predictions for the VR, mobile AR, and AR/mixed reality markets.

And so you can see how these technologies that are not meant for games will eventually swing back and help the mixed reality, AR, and VR companies. Llamas hopes that VR will grow from $4.9 billion in 2019 to a diminished but still impressive revenue level of $13.7 billion by 2022.

Llamas believes that much of the market will be games, but other sectors will be key to the long-term growth of VR as well. I hope we get there.

Let’s just hope it happens in time to see the pioneers get their rewards for going out on the edge.