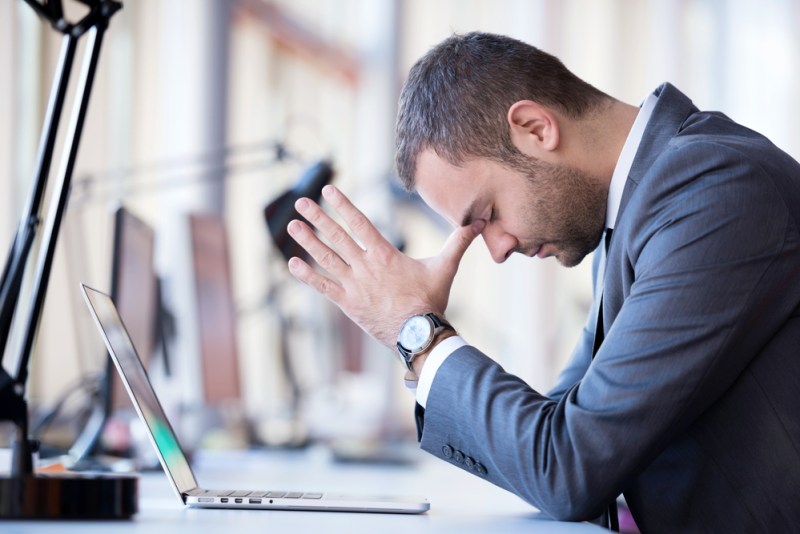 Silicon Valley is also a very resilient place. One of its advantages is that it sees so many failures. Paul Saffo, of the Institute for the Future, says that one of the area’s advantages is that the spires of Silicon Valley are built on the ashes of many failures. You learn from your mistakes. They make a lot of mistakes in Silicon Valley, but they keep on going. It’s not the end of the world. In other places, it can be embarrassing. It can mean a loss of face if you fail. But it’s not like that where I come from.

So what’s coming next? I talked about Masayoshi Son here. He’s predicting that we’ll have a trillion things connected to the internet of things soon. I’m sure everyone who’s imaginative here can figure out how games will fit into that internet of things. We have drone games coming, lots of robot games. We have retro movements as well. Virtual reality has some definite epicenters right now — in San Francisco, in Los Angeles, in China, and in other places like Montreal. A.I. is also extremely strong in places like Silicon Valley, Montreal, and Toronto. 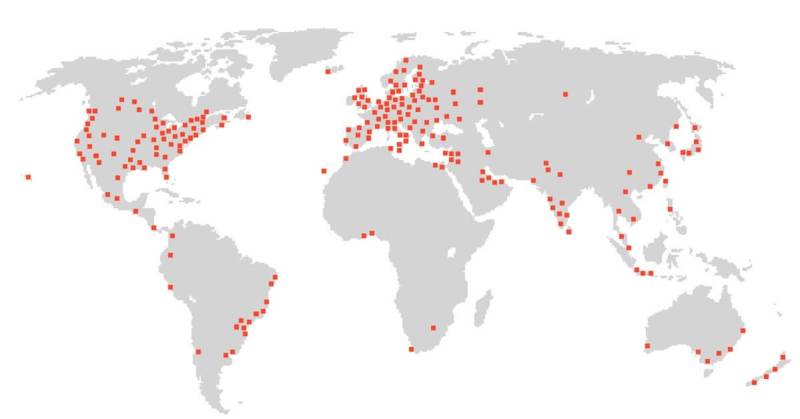 I’ve talked a lot about the intersection of sci-fi, tech, and games. Shows like Westworld, to me, bring that home. The producers of Westworld spent a lot of time in Silicon Valley doing their research before they created their androids and A.I.-based story on HBO.

If you look at this map, you might not see a real pattern here. But I feel like colder climates are probably good for games, like I mentioned with the Siberian gamers. If you’re in a stay-indoors environment, making games is going to be more attractive than if you’re able to enjoy the sun.

The real map of the blockbusters and game geniuses that matter 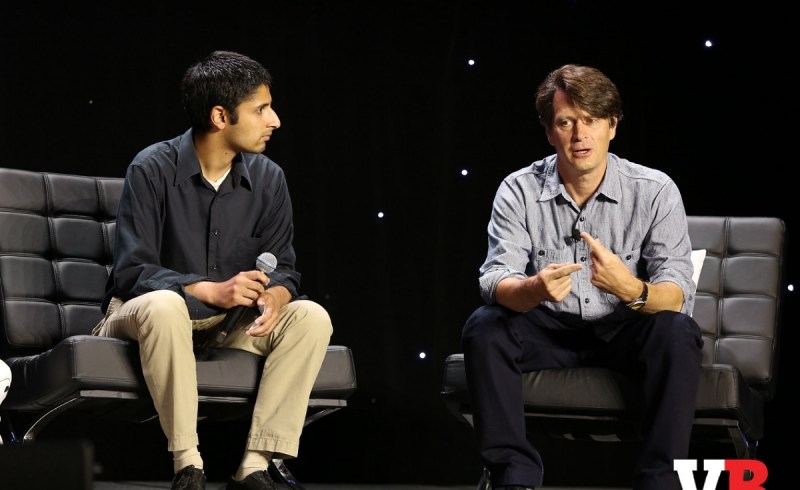 Here’s a notion about what really matters for your region and the strength of a whole ecosystem. You have to create blockbusters. Pokemon Go was created in San Francisco under license from the Pokemon Company in Japan. That game was downloaded more than 500 million times in its first 90 days and generated more than $600 million in revenue. It’s seen a big fall, but I hear that they’re ready for an update soon. That game company started with just 35 people going into Pokemon Go. They rapidly staffed up to 70 people, and I’m pretty sure they’re hiring a lot of people now to cope with the massive growth of their game. Game of War, made by Machine Zone, also known as MZ now, they have more than 900 people on the strength of just two games.

If you look at this map of the world — I wish somebody could do some big-data crunching here and create an actual map. One of my big complaints is that there just isn’t enough data about the game industry across the globe. Places like Canada measure things really well, but nobody else does. But if you just map all these blockbuster games onto the world, it’s interesting to see what you come up with. Blockbusters are the things that create powerful companies with hundreds or maybe thousands of people, if you consider companies like Blizzard for example. Blizzard and Activision employ over 10,000 people on the strength of just a handful of games. That’s what you need to aspire to if you want to be at the top of the food chain. If your region doesn’t have many games listed right now, it’s something to worry about. You can have large numbers of studios and large numbers of game companies, but blockbusters count. 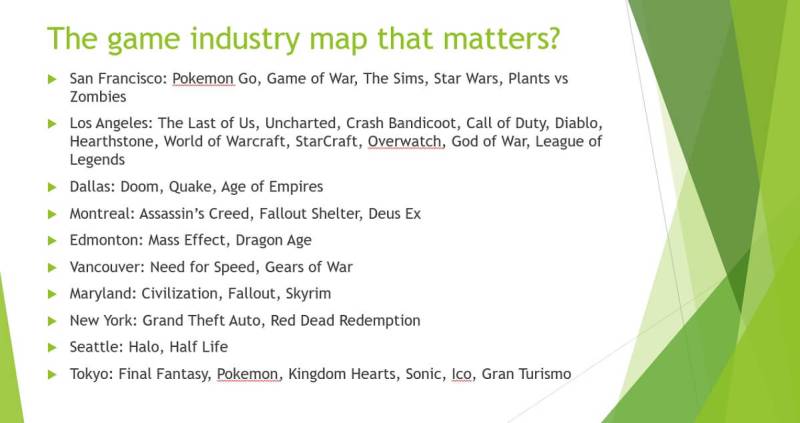 Above: The real game development map.

As I said, the gaming world is flat, but you can tilt it in your direction. This relatively small number of regions has created lasting franchises that keep the game industry going and generate the most jobs.

If you’re a multinational company, if you have some of these hits already, if you have some good franchises, your move has to be toward becoming a global game company. If you don’t become a global game company, you’ll be the prey of other companies that do. You need a wider talent pool. You need access to cultural expertise in every region of the world where games are consumed. Diversity works. It matters. Again, nobody has a monopoly on good ideas. It pays to diversify your company across all the regions of the world. 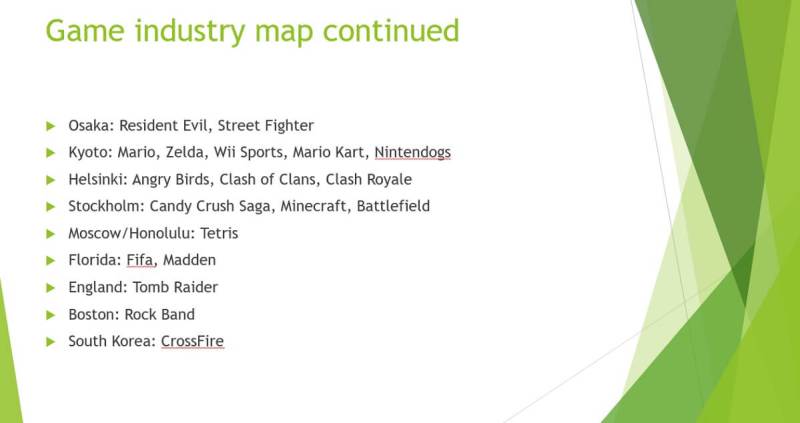 A line in Jurassic Park mentions how life gets through all the barriers put in front of it. Some of the scientists in that movie were surprised that the dinosaurs could get over and through barriers, but the phrase went, “Life finds a way” to get where it has to go. Games also find a way. They find a way to platforms that aren’t created for games. Many of the platforms out there were created for other reasons, but things like the iPhone became havens for game developers.

As a conclusion, you can think about opening your own company, but you should also think about building up your region. Your region has to produce those blockbusters. You can grow the video game economy over time, but it takes decades. Cost isn’t your only advantage. Talent has a lot to do with it as well. Those blockbusters come around thanks to brilliant people, individuals — maybe 25 people in the world are the reason that we have some of these outstanding game franchises. Shigeru Miyamoto at Nintendo has created more of these outstanding franchises than anybody else over time. Doing everything you can to encourage those brilliant people is your path to having a great game industry.

If you do all these things — foster your veterans, create a source of fresh talent, have a culture of fun and creativity, low costs, a critical mass of companies, government support — if we have all this, games are going to take over the world.