LAS VEGAS — The Golden Age of Gaming was the big theme of the annual Dice Summit, the game conference here where the important names in the industry gathers each year. The event’s organizer, the Academy of Interactive Arts & Sciences, named it so because of the big expansion under way across all platforms and territories. 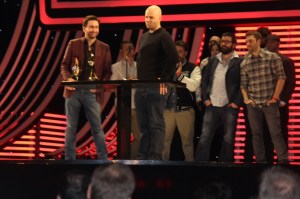 “It’s a testament to all of the changes happening,” said Martin Rae, the head of the Academy of Interactive Arts & Sciences, in an interview on the red carpet before the Oscars-like Dice Awards on Thursday night. “We are on the cusp of some really incredible stuff. Virtual reality will become a reality over the next few years. Fifteen years ago, you needed a big staff to build games. Now we have the Unity engine and the App Store. We can build games with small teams. We’re entering an age where the cost of building games will go down. It’s also where we will a big new blossoming of creativity.”

I’m hopeful that the golden age is here, and video games are expanding in all directions. Unity makes it easier to make cross-platform games, and it estimates it has saved game developers more than $1 billion in resource spending.

“It’s hard not to be pretty optimistic,” said Rich Hilleman, the chief creative director at Electronic Arts. “Almost every segment in the market had a great year. We are seeing the largest gaming audiences ever.” 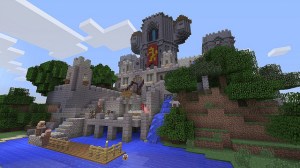 Above: Minecraft is part of gaming’s golden age.

We’ve seen the best video game console launches ever with the debut of the Xbox One and PlayStation 4. Indie games have exploded. User-generated content in games like Minecraft is making gaming endless. Mobile games are monetizing with the right strategy, as we’ve seen with Supercell’s Clash of Clans. New platforms are coming in the form of Valve’s Steam Machines and the Oculus Rift virtual reality glasses. E-sports has become a monster, and even viewing video games played by others has become a spectator sport. Game developers like Naughty Dog, whose PS3 title The Last of Us won game of the year and nine other awards at Dice, have raised the quality bar.

The Dice Summit was a chance to celebrate this age, and it had some golden moments. Leslie Benzies and Dan Houser of Rockstar Games made a rare appearance to accept a Hall of Fame award and to celebrate Grand Theft Auto V, which has sold an astounding 32.5 million copies since September. Houser was sheepish and shy in front of the awards crowd. And he was proud that his collection of misfits could now be considered one of the best video game teams in the industry.

“We all belong and have found a home together,” said Houser in his acceptance speech. He said the team has a “collective belief in the power and potential of the medium. … We love games, and we love the maniacs who make them.”

Mike Capps, a member of the board of the academy and former president of Epic Games, was so giddy as he said, “I saw a Houser.”

We’re seeing so much opportunity that it’s getting hard for even big developers to cover all of the territory. Randy Pitchford, the chief executive of Borderlands maker Gearbox Software, said, “It’s an exciting time because we have new platforms, and we’re in the throes of the transition. We’re building new original properties that we haven’t announced yet.”

Gearbox is spreading out by enlisting Telltale Games to make Tales from the Borderlands, and it has Blackbird Interactive working on a new Homeworld game. Pitchford and so many others at the event painted a picture of an endless horizon.

But just because we’re in a golden age doesn’t mean your company and your game will win. If your company is the 10th or 100th to enter an existing genre with a cloned or me-too title, you’re going to fail. You can work on high-quality games for five years, but the technology may pass you by, and rivals may make you obsolete. As the barriers between segments fall, your company will suddenly be in competition with a million others. If you choose the wrong platform, you may be locked into a slow-motion train wreck. If you spend more marketing your mobile game than you reap in virtual goods sales, you’ll lose money.

The hazards are many, even in the Golden Age.