Imagine my voice sounds like a horse-racing announcer…. And they’re off! Sony is winning the next-generation console wars. Well, only because it started selling PlayStation 4 machines last night, while Microsoft won’t start selling the Xbox One until a week from now.

Still, it’s hard not to get caught up in the excitement. Sony put on a reasonably good show in New York at the Standard High Line Hotel, where the entire place — even the showers in the rooms — was decked out in PlayStation branded regalia. More than 500 gamers showed up to get their preordered PS 4s and they were treated to free food, T-shirts, and lots of hands-on gameplay with demo systems.

That may not seem important, but the beginning of the next-generation console war starts with the establishment of good will. Brooklyn resident Joe Chiu, @Shinogu on Twitter, got the first machine. He was tired after a 24-hour-plus wait, but Sony let him claim his spot and then go home. He also got to hobnob with celebrities in the hotel, which Sony rented out entirely. Sony let him and other fans stay in the hotel rooms overnight. Adam Boyes, head of third-party development, thanked Chiu on Twitter. And Sony got him a cab home. All in all, Sony probably spent more on Chiu than he did on his system.

These gestures are small public relations coups that the mass media will repeat and air across the globe. Twitch livestreamed the event to its audience of 45 million monthly viewers, and SpikeTV’s Geoff Keighley aired a live version of GTTV for the launch. Sony also shared a few exclusive bits of news with the crowd, revealing the next Uncharted game from Naughty Dog, downloadable content for The Last of Us, and another sneak peak at Hideo Kojima’s Metal Gear Solid: Ground Zeroes. 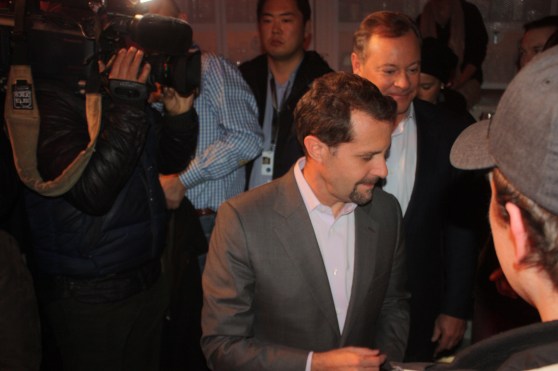 Above: Andrew House, head of Sony’s game division, showed up to hand out the first system.

Score a few for Sony. It’s very important in these early days for the company to show it is the friend of the gamer. Microsoft will have to try to outdo these small and big victories with its launch a week from now. And it can’t screw up. Microsoft executives started tripping over their words and offending gamers almost as soon as they started talking about the Xbox One back in May. Sony has a $400 box, compared to the $500 Xbox One. So now is the time for Microsoft to execute.

With last night’s New York debut, Sony set a high bar. It didn’t seem like it spent a ton of money, as it avoided a big spectacle in Times Square, where Microsoft usually does its debuts. Rather, it ran its show last night like an old pro. The event started on time. The gamers were entertained and treated like VIPs. Andrew House (pictured above), head of Sony’s worldwide PlayStation business, and Jack Tretton, head of North America, handed out the first system to Chiu.

That personal touch is something that Sony has learned after four major launch events over the past two decades. Celebrities might very well get the VIP treatment too, but they don’t get to cut in line to get their machines. And the gamers are really more impressed with the presence of rockstar game developers, rather than rockstars and movie makers. Sony had mascots dressed up like characters such as Knack on hand at the hotel, and it had a giant display where gamers could take a break and play a game of Breakout.

These nice little touches aren’t just good PR. For Sony, these lessons came hard. Back in 2006, Sony wasn’t thinking so hard about the gamers when it set its opening price for the PlayStation 3 at $600. It had a big shortage of PS3s, and it had to decide who would get them. Microsoft had an even bigger PR blunder with its Red Ring of Death, or overheating problems that caused console failures. Microsoft’s poor handling of that matter, which should have been easy to handle, led to a $1.05 billion write-off.

There are lots of little things that could still go wrong for Sony. A kid could get mugged on the way home, as happened when the PlayStation 2 launched in 2000 in Japan. Or Sony might dither when it comes to replacing machines that might be defective. (I’m not saying there are any yet; I’m just saying such failures are inevitable). It might run short on supplies and delay the PS4 launch in one of its loyal territories. Microsoft could very well make the same mistakes.

But the key is to take care of the details. Because this is part of that very short time when every media outlet in the world is going to care about those details, and that could very well affect the attitudes of gamers as they watch the media reporting from the launch events. So remember, Microsoft. It’s time to sweat the details. 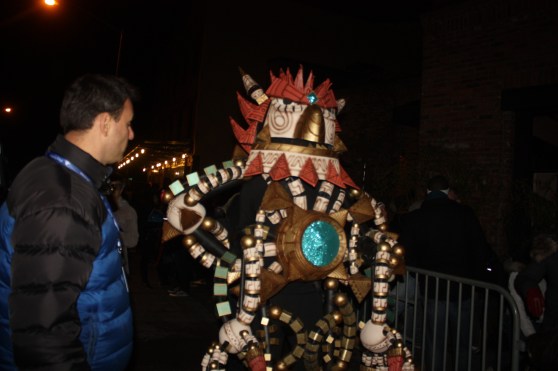 Above: A bigger than life Knack character