Josh Shen is one of the only people in the federal government whose job has a lot to do with video games. He’s a foreign service officer in the State Department, and he surfaced this week as a speaker at the Games for Change online event about games that make a social impact in our lives.

You can think of him as a friend of the gaming industry in Washington, D.C.

Previously, our man in D.C. was Mark Loura, who worked in the White House during the Obama administration in 2013 and 2014. This week, Shen gave a talk about how governments can help grow the game industry, and he wasn’t talking about tax breaks or recruiting overseas game companies to create jobs in the U.S.

He is the strategic designer for interactive media and video games in the Bureau of Educational & Cultural Affairs (ECA), a branch of the U.S. Department of State that promotes education, understanding, and public diplomacy programs to the 2.7 billion gamers worldwide. That’s a big job for just one guy.

“It’s a process, and everything is a series of opportunities where you fill in the gaps,” Shen said in an interview with GamesBeat. “My job started in 2019. It was a brand-new assignment, but they were able to identify the need. How often as a bureaucrat can you be the owner and only guru on subject matter like this? A lot of people recognized we need to be in this space, but they didn’t have any idea where to get started.” 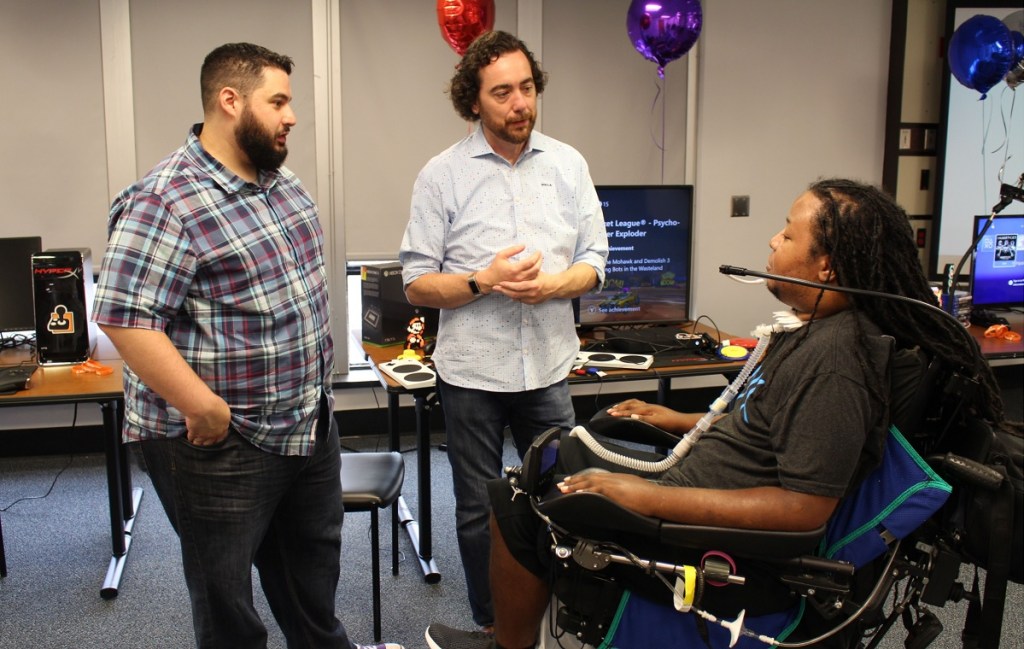 Above: Mark Barlet, center, has received the Vanguard Award from Games for Change.

Games for Change is the epicenter for talking about games that have a social impact, and it took place this week, with tons of great speakers who are at the intersection of government, industry, and nonprofits in gaming.

Susanna Pollack, the organizer of Games for Change, said in an interview she admires the work the State Department has begun to do to foster cross-cultural understanding through games in the Middle East and North Africa (MENA). Pollack invited Shen to talk at Games for Change.

Before we get derailed with an argument about why the government is spending our tax dollars to promote video games, I should say that we need more people like him in government. Not because of his politics or anything like that, but because he can be an ambassador for gaming as it navigates cultural divides and struggles to be understood around the world. And he can help create opportunities for game companies outside of the United States as they try to change the world through games.

While DeLoura, who won the Ambassador Award at the Game Developers Conference in 2017, focused on domestic policy on games and holding games and education events, Shen also took on the international aspect of the job of understanding games from a policy point of view. One thing that persisted after DeLoura left was the “federal games guild,” a collection of people in the government who care about game matters. Shen participates in that and wants it to work with private industry.

“What I understood very quickly was that you can’t have any credibility or leadership without recruiting the U.S. private sector,” Shen said. “That includes universities, nongovernmental organizations like Games for Change, Global Game Jam, and North American Scholastic Esports Federation. We should not pretend to be the experts. The most effective diplomat in my career is the citizen diplomat if you’re looking at the the long game.”

Above: Josh Shen talks about the State Department’s goals for games.

When it comes to recruiting foreigners and countries to support our interests and align with their interests, you can’t do better than American citizens, Shen said.

“It sounds a little idealistic and, trust me, I’m not an idealistic fresh-faced State Department officer,” Shen said. “I’m plenty cynical in my own right. What I’m optimistic is about American citizens and how they can impact others.”

Shen’s job, then, is to enable American game developers to get involved in programs where others can become aware of their work, whether inside the country or outside of it.

People understand that government institutions and NGOs should have social media accounts. But Shen believes the same should be true for participating in the game ecosystem. Part of getting games is understanding the world has around 2.7 billion gamers, and the industry is a [$175 billion] business, Shen said. Shouldn’t those institutions have Discord or Twitch accounts, Shen asked.

“We haven’t gotten there yet, but we will probably get there at some point,” Shen said. “If we’re not there, building those relationships, then when do we start doing this ecosystem? This is like where social media was 12 years ago. Gaming is where people are. If you’re not going to engage with them, you’re going to miss a sizable chunk of the audience.”

Not about tax breaks

Shen doesn’t focus on U.S. domestic business matters, like states giving tax breaks to attract game companies. He’s not part of the Commerce Department. And he notes that the U.S. game companies have not been looking for “carve outs” for the game industry, like other industries have done. Nor is his focus on assisting American companies to move overseas.

Shen has observed how other countries have big ambitions to invest in games. Dubai wants to create the world’s largest esports arena. Bahrain wants to develop an ecosystem of game studios, and so do many other countries where video games are an emerging market. Shen can connect paid or volunteer consultants to make introductions to share knowledge so that everyone can “get” video games. 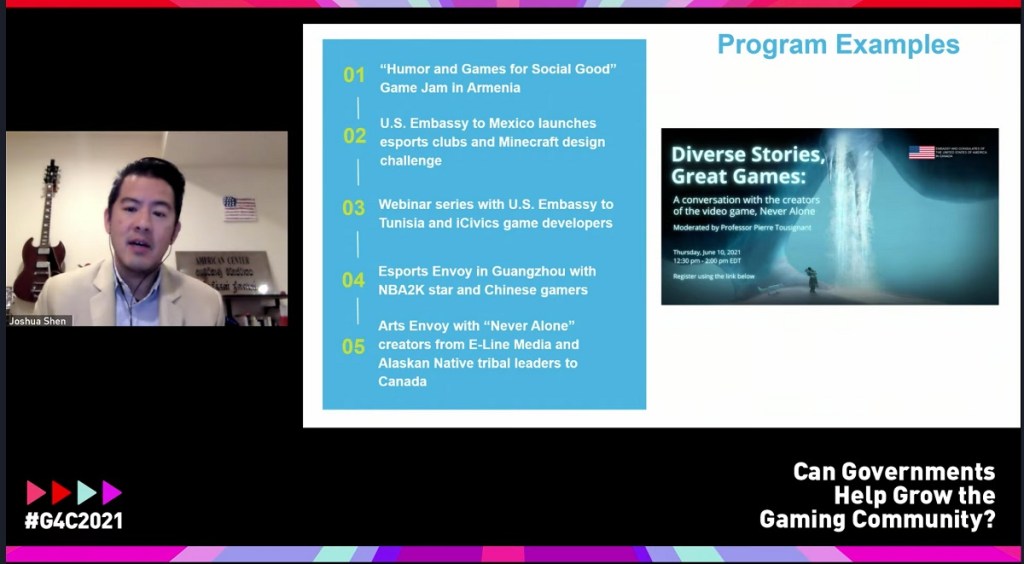 Above: Josh Shen is part of the Bureau of Educational & Cultural Affairs (ECA), a branch of the U.S. Department of State.

“I think it’s been popular to teach every kid how to code for quite a number of years now,” Shen said. “This is a 21st century core skill. You all you need to know how to code. I would say some level of game design is the type of skill everybody needs. One of the things we do in the State Department is to foster next-level skills, whether it’s English, or some type of maker space activity, or some type of coding.”

The State Department has some programs to support this. And Shen believes that learning game design is one of the skills that can contribute to economically stable, sustainable, and peaceful countries. People need to develop skills and Shen said, “We give them a playbook for that so they can do it themselves.”

If that’s not your usual idea of what the State Department does, Shen is in the Bureau of Educational Cultural Affairs, which has the soft programs that supports things like Fulbright researchers, athletes, musicians, hip hop artists, journalists, and entrepreneurs. This bureau brings people to the U.S. to educate Americans and it sends Americans out to teach others. Shen said his role isn’t partisan.

He was at Games for Change, the event for games with social impact, because that’s where he finds a lot of the people with interesting ideas that go beyond the purely commercial and entertainment interests.

“We love triple-A publishers, but we really do a lot more with independent developers who think that games have a social impact,” Shen said. “And that’s what we’re really excited to to support.” 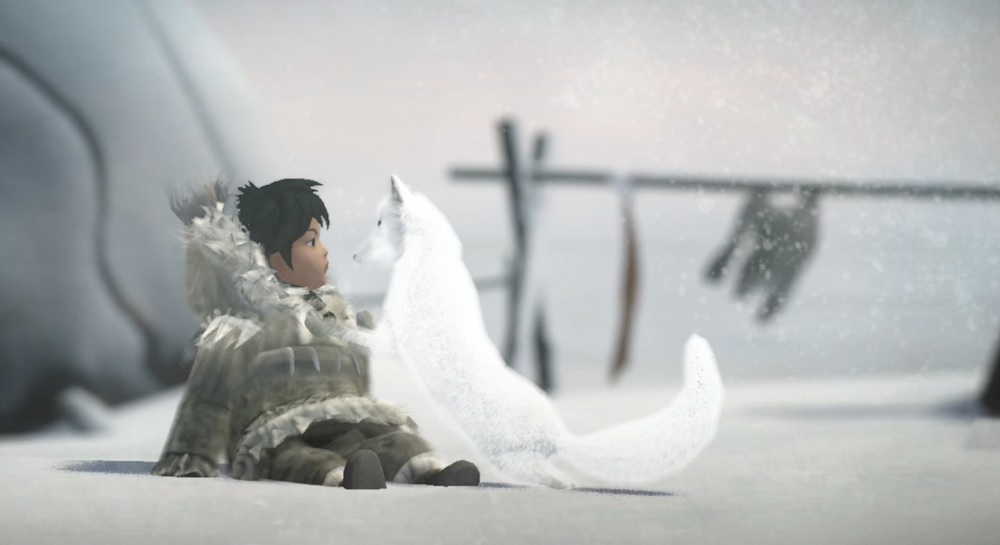 Above: Never Alone drew attention to stories of indigenous people.

The government isn’t going to create educational games because it doesn’t have the talent, and the process of government funding is prone to delays. But it can facilitate the connections that can help introduce video games in places that sorely need them. He recently had Alan Gershenfeld, whose company E-Line has made games like Never Alone, talk with Canadian developers about indigenous communities in games. And he arranged a visitation related to esports entrepreneurship.

Not all of the topics will be pleasant for the commercial interests, but they are necessary for the world we live in. One of the concerns is to teach others how to use content moderation and promotion of positive behaviors to deal with the presence of online extremism in video game communities.

One of the things that the new administration cares about is climate change, and the United Nations has a game-related program, Playing for the Planet, to raise awareness about it.

“This has a lot of eyeballs on it,” Shen said.

And so he’s trying to raise awareness of how games can be used to educate people about climate matters. You can think of him as gaming’s point man in the government, and his understanding of games is crucial at a time when gaming saved our sanity and our friendships and our connections during the pandemic.