Casual Connect was a fascinating conference with more than 250 speakers last week, all talking about the leading edge of games on social, mobile, and online platforms. It’s tough to summarize the patterns in this vast and chaotic industry. But it was fun and illuminating to hear so many speakers parse the market and reveal new perspectives and strategies.

The speakers made me think about the theme of Total World Domination, or global gaming, at our upcoming GamesBeat 2014 conference on Sept. 15-16 in San Francisco. Competitors are now stepping up and realizing that they have to look at gaming from a lot of different perspectives — or get checkmated by an adversary. Is your strategy a sound one?

Check out some of the ideas for the top ten takeaways about the future of gaming. For another view, head over to this blog post by Margaret Wallace, head of Playmatics. 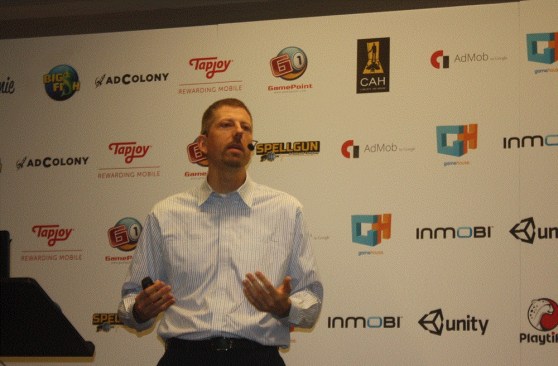 Above: Ethan Evans of Amazon

1. The giants have awoken

Giants like Amazon and Google can be extremely powerful when they bring their resources to bear on gaming. Amazon executive Ethan Evans said that his company woke up to the power of games when it launched its Kindle Fire tablets and found that most of the activity was around games, not eBooks. After that, it concentrated its firepower on games, making sure it had an integrated game strategy for its Fire TV set-top box, which has a cooperative shooter game in Sev Zero, and the Fire Phone, which adds cool side-look views to exclusive games like To-Fu Fury.

Those might seem like small efforts, but Amazon is paying attention to what is happening to games across a broad number of innovation points. It is doing so through investments in its Amazon Web Services business, cloud streaming of game content, original games, tablets, smartphones, set-top boxes, augmented reality, car computing, wearables, multiplatform synchronization, voice commands, and the Amazon Appstore for Android.

Google, likewise, can bring to bear its investments in Android and the Google Play store. The Android game community grew by 100 million players in the last six months, and there are more than 1 billion Android devices in the world. Google keeps adding game-friendly platform features like gift cards in multiple countries, quests with rewards, saved games, and player sign-ins, said Bob Meese, head of games business development for Google Play.

Google’s Niantic division has seen success getting an audience above a million for its Ingress massively multiplayer mobile game. If it can monetize the game, that would make it more viable, and the company is testing the idea of doing treasure hunts with real world prizes provided by sponsors. Google is moving on to a second game, End Game, and it plans to open up the platform to third-party game makers next year. That’s a lot of progress in creating a new kind of game.

If your company is a tech giant, then the question you have to ask isn’t about why you should go into games. It’s about why you don’t already have an intentional, not accidental, game strategy.

2. The market for women requires a different kind of thinking

In his talk at Casual Connect, Tseng said his team, now led by a woman, had to rethink its philosophy of game design at a high level. They call it “rhythmic design,” or games that are designed to fit into the way people live. Most other games demand your attention all of the time. You sacrifice other parts of your life to play games. The games demand your skill and strategy.

On the other hand, casual titles like FarmVille didn’t demand any of that. They give you a little joy or fun during a break at work. Such games work in the “in-between time” of your lives, like when you’re waiting in line or about to go to bed. Making games that fit into life were critical to Crowdstar’s success. The company also had to design games that fit into the state of the mind of players, particularly busy people who want a little relaxation or escape. Kim Kardashian’s Hollywood is a success, Tseng said, because it makes a player feel like a star, not an ordinary person.

Lastly, Tseng believes if you make a game engaging, the monetization will come. And the key to making something engaging is to create a community where players recognize the accomplishments of others and share their own. There’s a lot less zero-sum competition, where one player wins and the other loses.

“You have to reinvent a lot of things you thought were canonical to make a hit for women,” Tseng said. 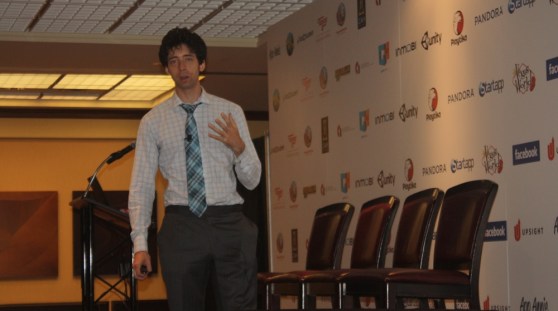 3. Games can be used to create powerful brands

Playmatics has made a name for itself creating games for brands like Redbull. That has given Nick Fortugno, cofounder of the New York company, a lot of time to think about brands and games.

Fortugno pointed to Disney’s Where’s My Water, a game that stars an alligator, Swampy, who likes to stay clean. The title worked well on mobile devices, as you had to slice through dirt to create channels for water to reach the alligator. The game was a big enough hit on mobile to justify further investment, prompting Disney to launch a line of cartoons and toys around the brand. It hasn’t set the world on fire, perhaps because the adults playing the game weren’t big cartoon watchers, but the thinking behind it was solid.

For Disney, the Where’s My Water franchise started as a very cheap investment in a small mobile game. That means that games are a great way to test a new intellectual property, Fortugno said. And those games can be one part of a larger story and extensible brand. The goal with the game is to reach a lot of people, not make a lot of money, resulting in a lasting brand.

Activision has gone big with a similar strategy with its Skylanders titles, which are toy-game hybrids. Disney has done the same with its toy-game hybrid Disney Infinity. And Nintendo is following suit with its upcoming Amiibo toy-game characters. Fortugno noted that LucasArts and LucasFilm, now owned by Disney, started over the Star Wars franchise. Disney is investing heavily in the next set of films, but it shut down its independent LucasArts game studio. Now Disney is hiring more game people, but they are experts in transmedia branding efforts and could grow new games based on the new Star Wars movies. That’s a sign of bigger things to come with inventing new brands in the game market.