4. Why diversity pays off in game design

When Terry Redfield was a girl, she was a tomboy and like video games. She was told she wasn’t supposed to be. But Redfield’s mother told her she could be whatever she wanted to be. Against the odds, she became a game designer and a startup founder.

Her training for that job included running a 300-person guild in Everquest, the massively multiplayer online fantasy role-playing game. In her first job, she worked on a game called Uprising, which was too hard to play. She said so, but she was told she was just a girl.

Then she worked on Psychonauts at Double Fine Productions and had a great experience, carrying out roles without facing gender stereotypes.

She started startups like Real Life Plus, working on games like Gardens of Time for Playdom/Disney. She also plays hardcore games like League of Legends, where she plays a healer. Her interests in games are diverse and broad, and she’s tired of seeing stereotypical female game characters. As a modern woman, she sees how she has changed through her life, but game characters that focus on just the outside, and not the person inside, don’t capture that. One observation: older women have stressful lives, and many of them don’t want stressful games. They may want something relaxing instead.

Her lesson in making Force of Elements, her newest game at startup Wicked Fun, is to create a diverse team with both men and women. The result is characters who are more believable.

5. Game deals are getting bigger and more global

Not counting billion-dollar transactions, the value of merger and acquisition deals was $2.27 billion in the first half of 2014, and it was $3.05 billion in the second half of 2013. And, excluding billion-dollar deals, the average deal size is increasing significantly. In 2009, the average deal value was $42 million. By the first half of 2014, it was $84 million, up 98.9 percent over five years. Google’s rumored acquisition of Twitch, which we confirmed has been signed, was just one of a number of deals that was in the works. Alibaba’s $120 million investment in Kabam was another confirmation of the industry’s momentum.

In 2013, Asian game corporations accounted for nine of the top ten acquisitions of game companies. The Corum Group said back in February that 60 percent of acquisitions are now cross-border deals as big companies try to expand their geographic reach to new regions and move to consolidate markets. Overall, the game market is expected to increase from $70 billion to $100 billion by 2017, according to estimates by entertainment investment bank Digi-Capital.

As I watch the frenzy of ChinaJoy, a game business and fan expo that will draw 250,000 attendees this week, I can only nod my head. Gaming is getting bigger. Everybody wants to be part of it. And the center of gravity is moving to Asia. 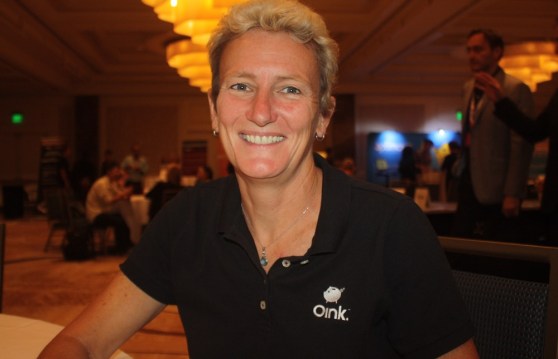 Above: Jo Webber of Oink

6. Protecting kids is a good thing

Regulators in the U.S. and the European Union are moving to protect kids by enforcing laws that prohibit deceptive practices. Platform owners like Apple can no longer call games “free” if they have built-in monetization systems such as free-to-play, where a player can start paying for free but has the option of buying virtual goods. We’ve seen a lot of stories about children who run up huge credit card bills buying goods that they thought were free. Too many monetization schemes seem like get-rich-quick scams built on the naiveté of young gamers.

This is creating opportunities for kid-friendly companies like Oink, which has created a system for parents to authorize purchases by their children in approved games, and AgeCheq, which enables game companies to verify the age of players and take the necessary actions to police what minors do online.

While Facebook may be aware of the age of the people using it, platform owners like Apple have a harder time figuring that out. But Oink’s technology allows parents to allocate an allowance for kids to spend in games that are pre-approved by the parent. If the kid overspends, the parent will know it.

“Technology gives us a way to protect kids online,” said Jo Webber, CEO of Oink. “We should take advantage of it.”

7. Appearances can be deceiving

But the laws of the land make the distinction between gambling and social casino games an important one to get right. Louis Castle, head of Castle Production Services and seasoned designer in both hardcore games and casino games, said that gambling is defined as a game where you have consideration (something wagered), chance, and a prize. A sweepstakes isn’t gambling because you don’t wager anything up front.

And while that seems clear, there’s some innovation that blurs the lines. Playstudios, a maker of the MyVegas social casino game, has a deal with MGM where it can offer real-world comps such as discounts on Las Vegas hotels as rewards in the MyVegas game. But Monty Kerr, cofounder of Playstudios, noted that the company doesn’t give comps to winners and deny comps to losers. Rather, if you play for a certain amount of time, you get the comps. So there’s no chance involved. On top of that, there’s no wager involved, as everyone can play for free.

Other games might say they have consideration and chance, but no prize, and therefore should not be considered gambling games. But regulators may someday decide that the little things you give away in a game may actually have real-world value. That’s going to make the legal debate more complicated.

Some of the best game designers like Larry Demar, president of Leading Edge Design, have been creating such games for decades. Demar said in a panel session that slot games are like rollercoasters with high spills and thrills. But the math behind random number generators, which ensure that a gambling slots game is a real game of chance, is so tough that you have to design the game with a mathematician helping you out. Still think slot machines are easy to design?