8. Find new territories for your game

Mag Yang told a story of his new game studio, Geoe Game. Although it’s based in Beijing, the new studio with 15 people found it couldn’t get an audience in China, one of the biggest mobile markets of all with more than 190 app stores. Big publishers weren’t interested in an unfinished game when Yang showed it to them. And when the company self-published the free-to-play title, nobody downloaded it.

But a surprise came when a publisher in Taiwan agreed to publish the game. Next, they found willing publishers in Singapore and Malaysia. The company operated the game itself and kept adding content. Although it had no investment and no experience in making mobile games, the game generated enough money to keep the company afloat.

“All the Chinese companies are going abroad, moving into the U.S. and Western Europe,” said Si Shen, CEO of Papaya Mobile, creator of the AppFlood global ad network. “They’re also focusing on developing countries in places like Indonesia, Brazil, and the Middle East.”

While revenue per user in those countries isn’t as good as in other countries, the cost of acquiring those users is lower as well, Shen said. Moving into new territories or platforms with less competition can sometimes be a move that makes all of the difference when it comes to survival.

If you think this is a game that the little guys play, look at Microsoft’s move into the Chinese video game market with the upcoming launch of the Xbox One. While Sony has the jump on Microsoft elsewhere, Microsoft is moving faster into what could eventually become one of the huge markets for traditional game consoles.

9. New platforms and technologies are also ways to outmaneuver competitors

Innovating on new platforms or with new technologies makes a lot of sense if you want to escape the race to the bottom. Facebook was late to mobile, but it bought Oculus VR for $2 billion so that it could leapfrog to the next cool platform for virtual reality.

That’s why companies like Plantronics are investigating the market for games on wearable devices. The maker of headsets for gamers is exploring cool game-related users for technologies like voice control or drop detection on devices such as Google Glass. You might think of Plantronics as a boring company in a commodity accessory market. But Plantronics sees itself as a pioneer in new kinds of wearables, sensors, and platforms for making games.

The interesting thing is that these two technologies are moving in different directions. Virtual reality aims to immerse gamers even further in game worlds, while wearables are all about giving you opportunities to play in quiet moments like when you’re walking on a beach.

“There’s a lot more to wearables than slapping something on someone’s wrist,” said Corey Rosemund, business development director at Plantronics, in a lecture. “We’re at the tip of the iceberg for this.” 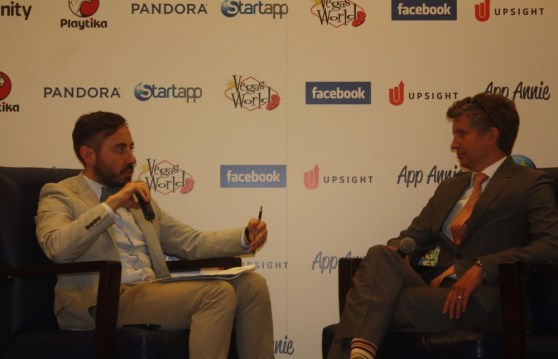 Above: Arseny Lebedev of Signus Labs and Tommy Palm of King

10. The line between winners and losers is a thin one

Some game companies make it look easy to come up with big hits in mobile games. Supercell has three games, and they’re all hits. Electronic Arts has more than 800 mobile games, but it has a handful of hits, like The Simpsons: Tapped Out, that really move the needle for the big company.

Tommy Palm, a key figure at King in the creation of the mobile game sensation Candy Crush Saga, knows just how thin this line is. He said in a fireside chat with game maker Arseny Lebedev of Signus Labs that he almost quit the game business because he endured six months without a paycheck in his early days as a game designer.

“I remembered this really vivid memory back in 2000,” Palm said. “I was considering taking a job at McDonald’s to support myself.”

Then his small company managed to get a contract with Nokia to continue doing mobile gaming work.

“I was almost in tears because it saved the company for another two years,” Palm said. “The low point can be really terrible.”

He stayed on the path of game design, and by November 2012, helped King launch Candy Crush Saga. The rest was history, as the game enabled King to go public on revenues of $1.8 billion last year, most of it generated by Palm’s game.