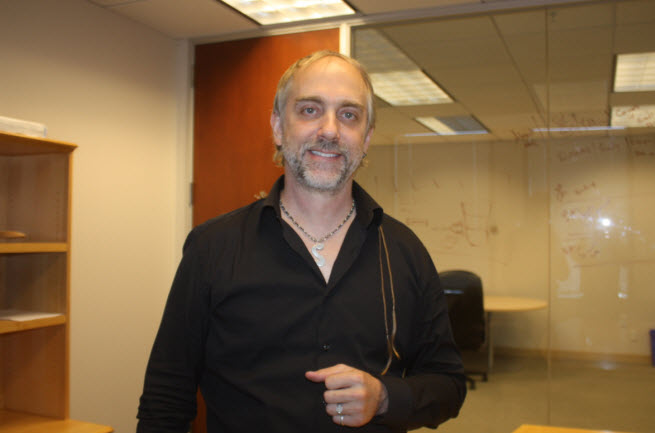 How do you succeed in video games? If I had that answer, I would be rich. I could study the whole history of the game business, or I could simply look at what happened this week. And it has been another amazing week indeed.

As I watch what the pros do, I can’t help but notice that staying in the game is important. Even after you fail. Richard Garriott [above] is one of those game developers who has survived and thrived in the game business for more than three decades. He was there at the beginning, creating role-playing games like Akalabeth and Ultima on floppy disks that shipped in plastic bags. He came up with the story for Ultima in one of his much-hated English classes and then went on to create a gigantic franchise for Origin Systems, which he sold to Electronic Arts. Garriott went on to create titles like Ultima Online, the first big hit in massively multiplayer online games.

And he also dug one of the biggest craters in gaming history, with the seven-year quest to create a sci-fi massively multiplayer online game, Tabula Rasa. When it debuted, nobody played it. But he didn’t quit. He didn’t give into the evil of making games that he didn’t want to make. He flew into space on his own dime, using his profits from decades of making games and becoming the only second-generation astronaut in the world. He could have called it quits after an achievement like that. But then he started making Facebook games, and he’s not done yet. He’s making news this week with a new game and a Kickstarter to fund it, too (more on that in another story). Garriott has a shot at success because he is taking another shot.

Now, I started thinking about this column because of the efforts of some of the youngest people in the industry. The three-man crew creating a documentary, Videogamer: The Film, is coming in fresh out of school and early jobs to ask the question, “What is innovation?” It’s such an elementary question that I thought, “Why didn’t I think of that?” We’ll see what amateur filmmakers Josh Craig, Jonathan Reynolds-Engel and Shepherd Chou come up with. They’re going to knock on everybody’s doors until they get good answers.

Now they have a ways to go. Malcolm Gladwell, author of Outliers, estimates that it takes about 10,000 hours of specialized training to become so awesome at something that you’ll appear to be a genius in that field. That’s what software geniuses like Bill Gates and Bill Joy did. They had done their 10,000 hours of programming by the time they were out of high school. Most people figure that those guys were born smart, but what they really did, as Gladwell points out, was put their hours in. They got plenty of help, and they didn’t give up.

The combination of the old and the new can sometimes lead to success. Disney teamed up again this week with the young studio Imangi to release Temple Run: Oz. And Zynga, which has been battered in the stock market but hasn’t given up on the chance of a comeback, chased Temple Run into the endless runner genre with the launch of Running With Friends, created by the old game studio Eat Sleep Play. Zynga needs a lot of hits to pay for its payroll for 3,000 employees. But it’s not about to throw in the towel just because it got a bloody nose last year.

You have to admire the folks who are staying in the game and the rewards that they’re reaping for it. Brian Fargo, the chief executive of InXile, took a lot of risks creating early franchises in the beginning of the game industry. Now he’s reviving some old classics, raising money for them on Kickstarter, beginning with Wasteland 2, a sequel to a role-playing game he made in 1988. This week, Fargo launched a Kickstarter to revive a classic with Torment: Tides of Numenera. He hit his target of raising $900,000 in his first day, scoring more than $1.5 million in donations from the crowd.

Chris Taylor, the grizzled chief executive of Gas Powered Games, was on his last legs. He lost deals to make games and tried a Kickstarter as his last Hail Mary play to raise money for his game studio. He failed to raise the money, but just before shutting down, he managed to sell his 15-year-old studio to Cyprus-based Wargaming.net. Thanks to World of Tanks, Wargaming.net is printing money. It has enough dollars to fund whatever Taylor wants to do. That’s a nice outcome for Taylor, who stayed in the game, even when everything was looking like it was falling apart.

Gordie Campbell just might stun us all. He is a pioneer of Silicon Valley, and he had some great successes. He also had a huge failure with QuickSilver Technology, a reconfigurable chip company that burned through $84 million before it shut down in 2005. His new companies, LeoNovus and Sviral, have created parallel programming that makes use of all of the unused computing power in homes and offices. That might seem like it has nothing to do with video games. But with Campbell’s technology, it would make sense for game companies to give away their consoles for free, with the only condition being that they could use the processing power of those machines when the user wasn’t playing games. LeoNovus will turn that computing power into a profit-making distributed data center.

If you see a pattern here, you could call this the revenge of the old farts. But survival itself is not a high threshold for defining success. The bad thing about getting old is that you will sometimes find that, when you are faced with a new decision, you can pull out a personal example from your past that gives you a great reason to do it, and you’ll have another personal example that tells you why you shouldn’t do it.

I am an optimist. I think that people who believe in the impossible should be encouraged. They are the ones who get things done. They last longer. They defeat evil. And they are left standing after everyone else has fallen. And they maintain the ability to take a fresh look at things. They have the capacity to be surprised and to act on that.

So if game studio layoffs have got you down, and you’re thinking of giving up, don’t forget this. When you survive in the game industry, you are managing to do what so many other people can only dream of. You can get paid for playing or making games.

Warren Spector, a game designer in his 50s who just saw his studio shut down by Disney, put it well in a recent talk. He wants senior game designers to think about their legacies and giving back. He values passion over analytics. And he thinks change is the norm.

Quoting inventor Alexander Graham Bell, Spector said, “When one door closes, another opens. Another aphorism is more relevant. ‘Chaos is a friend of mine.’ Bob Dylan said it in 1965, and it is still true today. I have seen so much chaos in the last 35 years, you wouldn’t believe it.”

Every week, I see something new in gaming. And that’s even after writing about video games since 1996. This week, I saw how some health care researchers at Xerox’s Palo Alto Research Center were using Microsoft’s Kinect motion-sensing game system to detect the air intake of a person, simply by using a 3D space sensor to detect a change in the person’s chest volume. What can you get from that? Well, maybe the next Kinect will detect your heart rate, and it will speed up or slow down the game based on how excited you are.

That’s exciting to me. So I’m going to keep at it for another week.