This year, with our ramped up our GamesBeat review team, we’ve taken our Game of the Year choices much more seriously than we have in the past. We asked our reviewers to select the semifinalists and then picked the final winners ourselves. But our vote on the best game of 2011 ended in a tie, so we had to hold a tie-breaker round to pick our winner.

And the final tie-breaker vote went — for the second time since 2009 — to the Uncharted franchise.

It was a more democratic and contentious process than we’ve ever had. But it’s the least we could do, considering game companies are spending scores of millions of dollars on games, and consumers are spending billions of dollars on them. This year offered some of the best games we’ve ever seen. We hope you enjoy reading our selections, and please let us know in the comments if you agree or disagree with our choices. Be sure to take our poll at the bottom of the story. 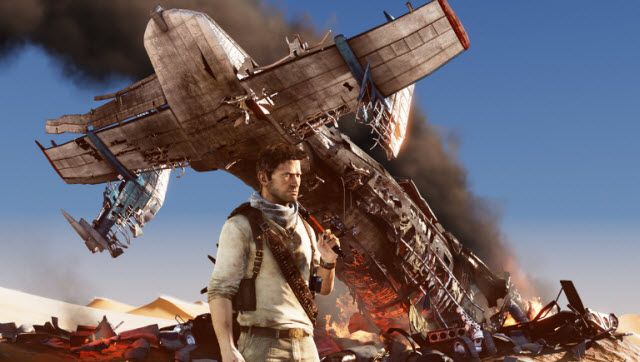 In 2009, we gave Uncharted 2: Among Thieves the honor of game of the year. And in 2011, Uncharted 3 has taken the top title again because of its cinematic story, realistic characters, outstanding graphics and unbelievably action-packed combat scenes. As the treasure-hunting hero Nathan Drake, you have to battle your way through a burning French château as it collapses around you. You have to survive a firefight in a cargo plane as the aircraft’s cargo empties out the open ramp in mid-air. And you must dispatch your enemies as you outrun the flooding of a capsized cruise ship. In every scene, you see the spectacular effects from just the right angle, and you have to time your response right to survive in the nick of time. After you play this game, you close your eyes and see the memorable images — like those damn spiders — that take you back to the immersive experience. This is what makes Uncharted the crown jewel in Sony’s portfolio of great video game franchises.

As our interview with Naughty Dog’s Justin Richmond revealed, the developers focused on creating movie-like set pieces, or action sequences that took our breath away, much like blockbuster movies do. The beginning of the game took us deeper into the character of Nathan Drake and his relationship with fellow thief Victor “Sully” Sullivan, who is both Drake’s corrupter and savior. You feel the emotional tugs as Drake parts from his companion Elena, whose eyes sparkle as she holds back tears. You can feel the hatred as Drake seeks revenge against Katherine Marlowe, a memorable villain who runs an army of thugs in a secret society.

Nobody aspires to create such a high level of emotional engagement in games, particularly in the genre of shooting games. The title has its flaws, but it overcomes them by making you feel like an actor inside an adventure movie where your actions make the difference between life or death. The action is backed up by humor, witty dialogue, and a symmetry in the story that links the beginning and the ending. That is what makes this title appealing to much more than just hardcore shooting fans.

“An airplane losing its cargo in mid-air. A château falling apart in an inferno. A cruise ship sinking from a hole in its side. Only Naughty Dog considers staging gun battles in such places. They are defining moments in a game that really delivers a game-play experience that is like no other.” — Dean Takahashi 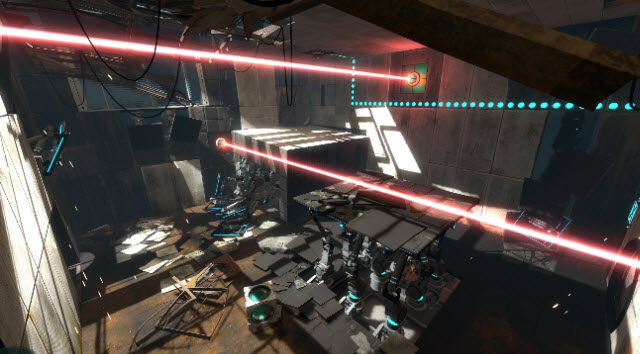 Valve’s Portal 2 was built upon the strong machinations of the massively successful original. To be honest, Portal 2 is rarely more than a series of standalone test chambers, some of which are not particularly clever, or enjoyable. That said, it’s not the mind-bending, space-shifting, goo-riding puzzles that elevate Portal 2 far above the competition, but rather its unrivaled writing and voice acting. GLaDOS, Wheatley, and J. Jonah Jameson deftly propel the voiceless Chell along on her journey with their insane ponderings, diabolical aspirations, and undeniably witty banter. With developers constantly struggling to push their games to some arbitrary 10, 20, or 50-hour playtime predominantly listed on the back of the box, Portal 2 proves that a shorter, concise, and well-made masterpiece is infinitely more valuable than a 100-hour game that wears out its welcome long before the credits roll.

“The last game before Portal 2 that I willingly beat twice in the same day was Resident Evil 2. To fans of either series, that is the highest recommendation I can bestow.” –Sebastian Haley 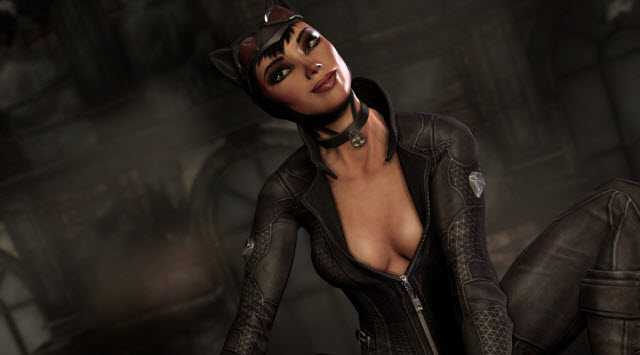 Cliff “CliffyB” Bleszinski once promised that Gears of War 2 would be “bigger, better, and more bad-ass” than the original. Whether or not that was accomplished is up for debate, but Rocksteady could have easily applied that PR catchphrase to this year’s Arkham Asylum sequel. Taking to the streets of the makeshift Arkham City, players can experience the crime-fighting and crime-solving aspects of the World’s Greatest Detective like never before. I’m not sure why it took so long for someone to finally get it right, I’m just glad that they did.

The writing and voice acting is sketchy at times, but the brilliant and plentiful Riddler puzzles are easily the most well-thought-out diversions in any game I’ve ever played. At first I scoffed at the addition of a playable Catwoman, expecting nothing more than a half-assed mutation of Batman (you know, like Robin and Nightwing ended up being). But Catwoman ended up stealing the show, in my opinion — her combat moves are downright awesome, while her wall-climbing and whip-swinging traversal make an excellent alternative to the Dark Knight’s.

“Rocksteady has managed to not only create one of the greatest pieces of Batman culture, but has also elevated Catwoman to the upper echelon’s of gaming’s most able-bodied females. It’s not a perfect game, but it’s also hard to imagine where Rocksteady can go from here.” — Sebastian Haley 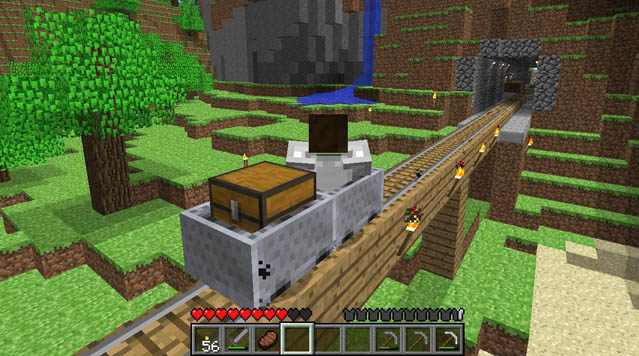 Minecraft takes players into a blocky, procedurally generated world, complete with mobile monsters (mobs), farm animals, and an underworld called the Nether. It runs on the Java platform on PC and Mac, as well as within a web browser. The game provides an open world with day, night, and weather cycles. Players must dig deep into the skin of the world, gathering resources to craft ever more complex items and contraptions, and can also build high into the clouds, making Minecraft one of the most addictive and innovative games of the last couple of years.

Released as alpha software in May 2009, and as beta in December 2010, the game made waves across the internet as geeks and gamers discovered this sleeper hit, spending $20 per license and making original programmer  Markus “Notch” Persson enough money to start a company, Mojang, and bring the game to full 1.0 release just this past November. Minecraft had surpassed 10 million registered users by July, 2011, and over 4 million purchases by November 2011, even before release. It has never been commercially advertised, only passed along by word of mouth. There is an extensive YouTube presence of the game, with Minecraft video creators like Minecraft Dad building what seems to be a lucrative channel on the video service, all based on this game.

“Minecraft combines the joy of building, the thrill of discovery, and the mechanics of video game survival into one fantastically compelling game made all the better by its staunch indie cred.” – Rob LeFebvre 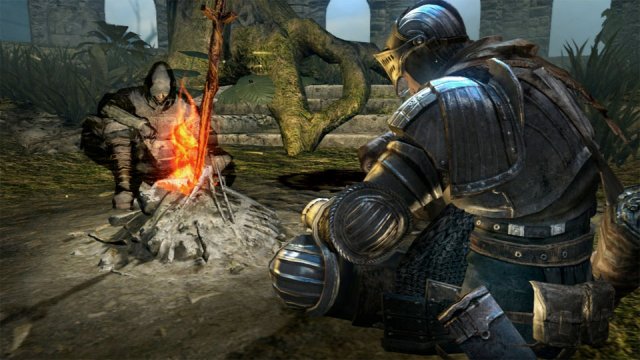 Yes, Minecraft and Dark Souls are tied. These games couldn’t be more different. Dark Souls arrived in style towards the end of the year, offering gamers what is essentially an evolved form of its spiritual predecessor, Demon’s Souls. With its deep character creation and weapon crafting systems, and virtually load-free open world, the game provided the opportunity for players to engage in a highly immersive and personal journey.

What made Dark Souls stand out this year, to my mind, is the care and attention to detail that From Software put into crafting the game world. Playing the game, I was constantly surprised and astounded by what I saw, making my steady exploration seem like a real adventure, in the truest sense of the word. While Dark Souls offers a level of difficulty not seen in many current-generation games, it is perfectly beatable, given the right amounts of patience and tenacity. There is no denying that you will die, a lot, while playing the game, but the brief moments of joy elicited by success, against seemingly insurmountable odds, are second to none.

“Dark Souls offers a vast and mysterious game world, beautifully crafted and filled with magic and wonder at every turn. It offers a level of challenge that is missing from most games, inviting you to explore and discover its secrets for yourself. The mixture of RPG, action and subtle multiplayer elements is truly sublime, and is a great example of how to incorporate multiplayer features into a largely single player experience.” — Dan Crawley