In the past week, I combed the San Francisco Bay Area to find the most inspiring game developers. I went from Cupertino to Novato, from San Francisco to Berkeley, seemingly on a random journey from one meeting to the next. But I came away astounded at the creativity that I found. I’ve been obsessed with this subject of creativity and diversity for a while, and I was pleased to see everyone I met in the region so awash in creativity and optimism.

This region is among the most expensive places in the world to develop games. Yet it is populated by a disproportionate number of game developers and studios, big and small, just like the tech industry is over-represented in Silicon Valley. You can make games much more cheaply in other locations, and many companies do. The world is flat when it comes to video game development. But, like in Finland, Canada, and Japan, there’s something in the water in the Bay Area that makes people bold and inspired to create the best games they can possibly make. They believe their creations can overcome the forces of economic change, industry cycles, consumer fatigue, and other tides that make survival tough and constant struggle a must.

“I believe we create our own destiny,” said Paul Reiche III, the head of Toys For Bob, in an interview at the home of Skylanders in Novato, Calif. “If we make exciting games, inspire people’s imaginations, and make them think, ‘Wow, that’s magical,’ then we can get as much success as we deserve.” 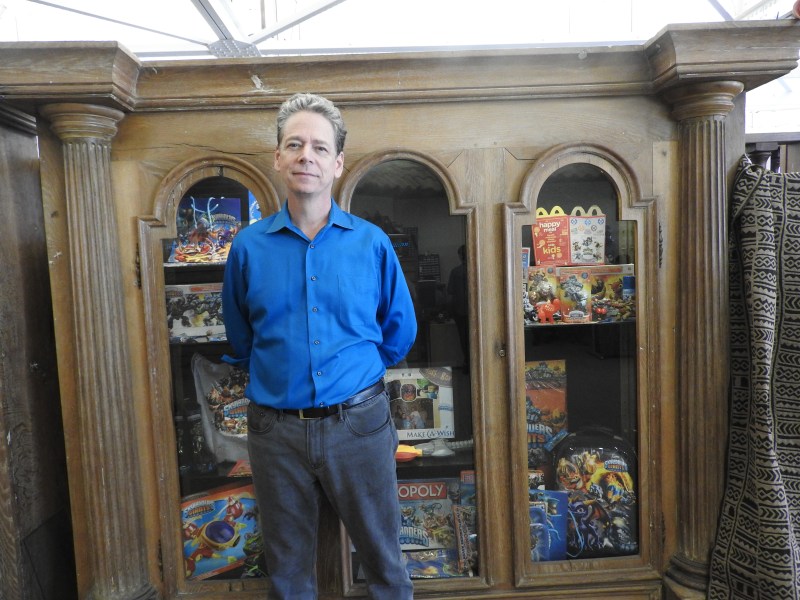 Above: Paul Reiche III, cofounder of Toys For Bob, at the company’s headquarters in Novato, Calif.

In spite of the laws of gravity that are working against the growth of the “toys to life” market that Activision’s Toys For Bob created, Reiche believes in the toy-game hybrid combinations under the Skylanders brand. Disney threw in the towel on its toys-to-life Infinity games, but Mountain View, Calif.-based CastAR believed enough in the marriage of toys-to-life and augmented reality to hire a bunch of the Infinity developers.

These people share a lot in common. Despite the economic prediction that the cycle is heading against them, they still courageously charge headlong into the breach. Reiche believes that Skylanders Imaginators will be the company’s best game yet. His rival, Arthur Parsons, game director of Lego Dimensions, was visiting from the U.K. this week. He was sad about the Disney Infinity shutdown. But his teams are carrying on, as if there is no way to run out of gas.

“Even though people predict we’ll stop innovating, we keep on innovating,” Parsons said. 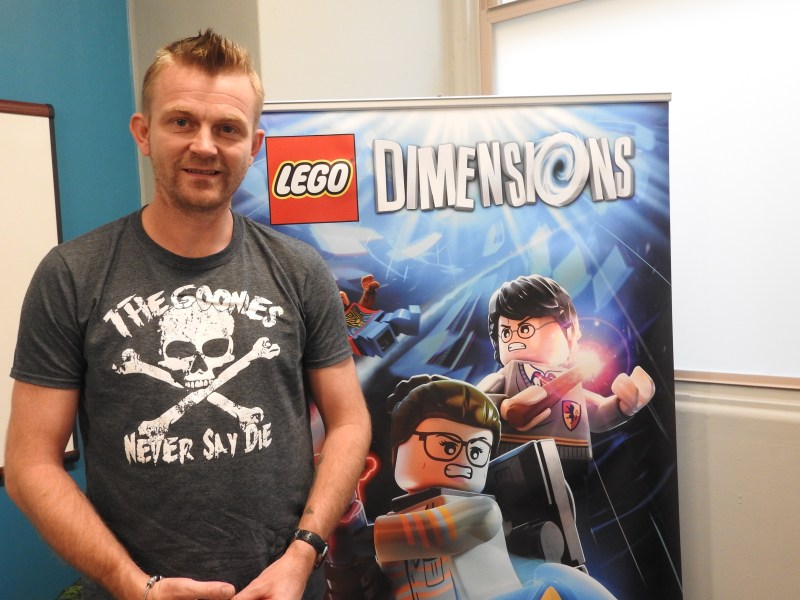 Above: Arthur Parsons, game director on Lego Dimensions and head of design at Travellers Tales.

Noah Hughes, creative director on the Rise of the Tomb Raider game at Crystal Dynamics in Redwood City, Calif., told me that he still sees a lot of room for Lara Croft to grow. With the Tomb Raider reboot of the past five years, we’ve see Lara grow from an innocent teenager to a more self-assured adventurer. But Hughes said she still has room to grow in future stories before we get to the swaggering Tomb Raider typified by actress Angelina Jolie.

Mark Rubin, a board member at Gazillion and former head of Call of Duty studio Infinity Ward, told me that he thinks that developers will continue to mine the opportunities for Call of Duty for years to come, even though they’ve already been at it for 14 years.

It takes a certain amount of guts to keep your gas on the pedal at full speed ahead when prognosticators say that there’s a big stone wall just on the other side of that crest. So who cares if mobile games might be slowing down and venture capitalists are no longer putting money into it. Mobile is a better opportunity than ever, as it reaches a billion people and can produce 500 million-download hits like Pokémon Go. If Niantic Labs had listened to the naysayers on mobile, it would have missed out on $500 million in revenue. 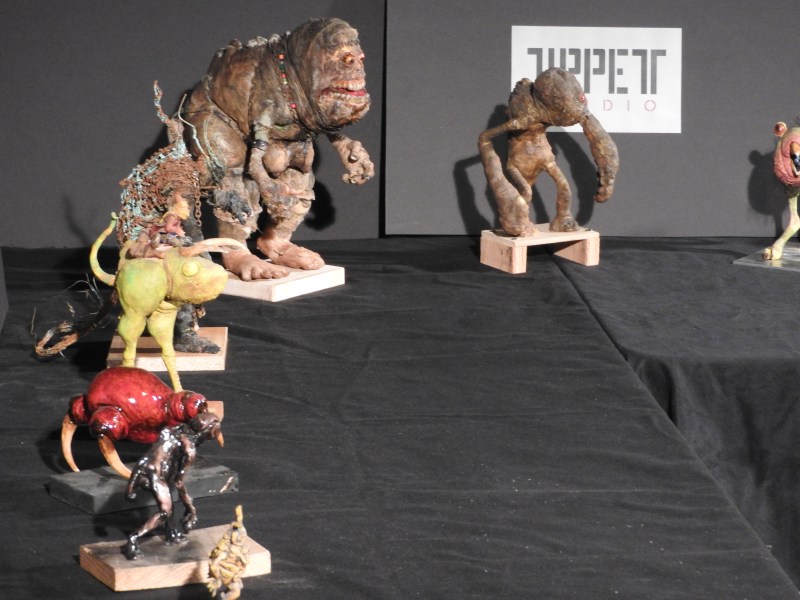 If you can keep on this pace of innovation and creativity for decades, then you are truly something special. That’s the case with Phil Tippett, a legendary visual effects maker who won Academy Awards for his work on Star Wars Episode VI: Return of the Jedi and Jurassic Park. He announced his first game ever this week since starting his crazy visual arts studio 30 years ago.

Some creators pivot when they see an opportunity. Tippett sees virtual reality and augmented reality as the Wild West. He still crafts his physical monster toys by hand, and then converts them into a digital format. They can be used in movies, TV shows, and now games. In the future, they’ll appear in digital experiences on HoloLens and VR headsets. That’s how Tippett stays relevant, and keeps from getting stale.

“Nobody knows nothing here, so creatively you can try a bunch of stuff,” Tippett said as he was showing HoloGrid: Monster Battle. “Nobody is going to tell a three-act structured story as good as you can in a movie or a novel. But the VR stuff gives you a 360-degree dance field, a theater in the round. All of the stuff you can do beyond a 2D stage is hugely exciting.”

As I walked around the wondrous workshop that Tippett called his “demented Santa’s toy shop,” I could see the thread of creative madness and genius that led him from making Holochess in the first Star Wars movie to making creatures for the game.

“I’ve got a great deal of time to make mistakes. Mistakes guide me in how I approach the subject matter. I will consciously set up scenarios where I have an image for something but I don’t really know how to do it,” Tippett said. “It’s almost like an animistic point of view. The objects materials talk to you and tell you what they want. You’re almost like an interpreter.” 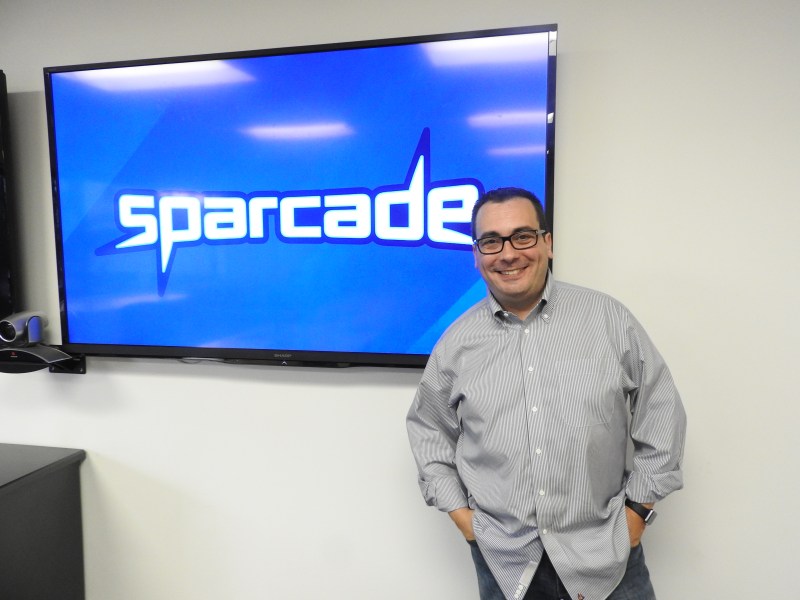 Greg Canessa, an executive at GSN Games in San Francisco, is very different from the hands-on Tippett. But Canessa, who is creating the Sparcade arcade games for cash prizes platform, can get giddy about coming up with a creative business model to make money from games. It is his way of getting around the static top-ten-grossing games lists that makes it hard for others to compete. As he stood in front of his creation, he said, “This is why I came here. I have to get excited. I have to have a reason to get up in the morning.”

All of these people are drenched in optimism about games and how creativity will lead to fun for us for years to come. For sure, it makes sense to throw cold water on these people once in a while. But we all need them to keep moving forward past the horizon. Creativity wins. And it was so good to reinforce that the Bay Area is a still a great fountain for this stuff.