Has the world gone mad for games? Are we in a Golden Age? Yes. Will it end? Eventually, but not for a while. Many ingredients that are fueling this fire. We’re going to be analyzing the ingredients of billion-dollar deals and what it takes to put them together — among other topics — at our first-ever GamesBeat Summit, which will take place on May 5-6 at Cavallo Point, in Sausalito. But let me take a crack at it now. 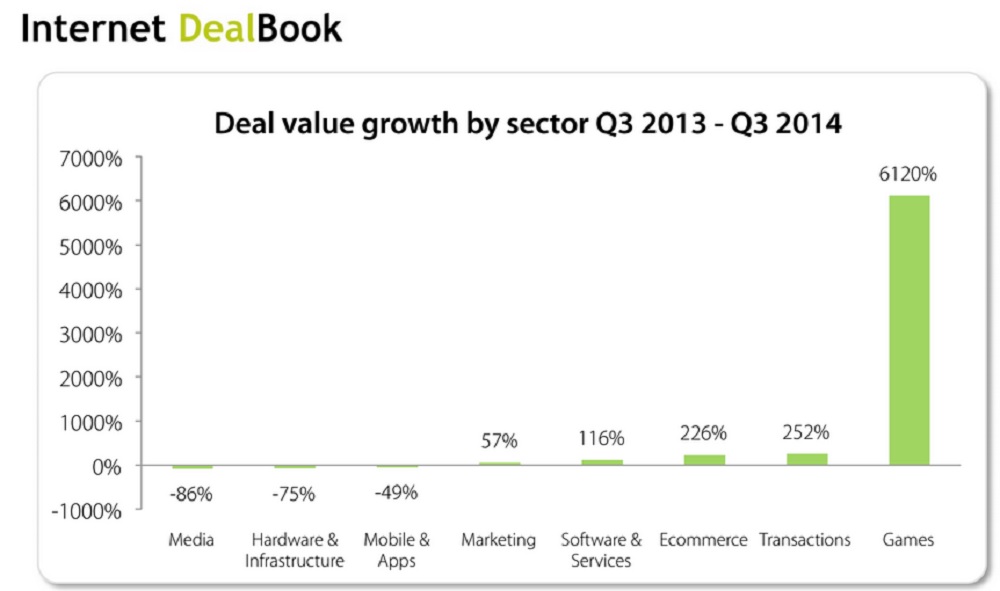 Above: Game industry acquisition and investment deals have soared.

The Big Fish Games deal was notable because it was carefully put together. It has a big earnout, based on how well Big Fish Games does under Churchill Downs. Big Fish Games gets $485 million up front, and it gets $350 million more based on its earnings in 2015. The purchase price is 8.5 times to 15 times earnings before certain items like depreciation, and 1.6 times to 2.8 times bookings, according to an analysis by Adam Krejcik, an analyst at Eilers Research. Since Churchill Downs is only worth $1.8 billion on the stock market, this is a huge bet on its future in digital games. But many game companies have been bought at two times to 7.5 times bookings in recent times, Krejcik said.

One of the things we are seeing is a lot of potential buyers. It isn’t just the traditional game companies like Electronic Arts or Activision buying mobile upstarts. In fact, those companies have retrenched away from such strategies.

Rather, people see the obvious potential of mobile games — $25 billion in revenue this year, according to market researcher Newzoo, for an industry that is still considered to be in its early years — and want to be part of the land grab, said Dan Offner, the former general counsel for Oculus VR, who announced this week he is forming a new law firm, Offner & Associates, for game companies. In an interview with GamesBeat, he said he is becoming an investor as well. 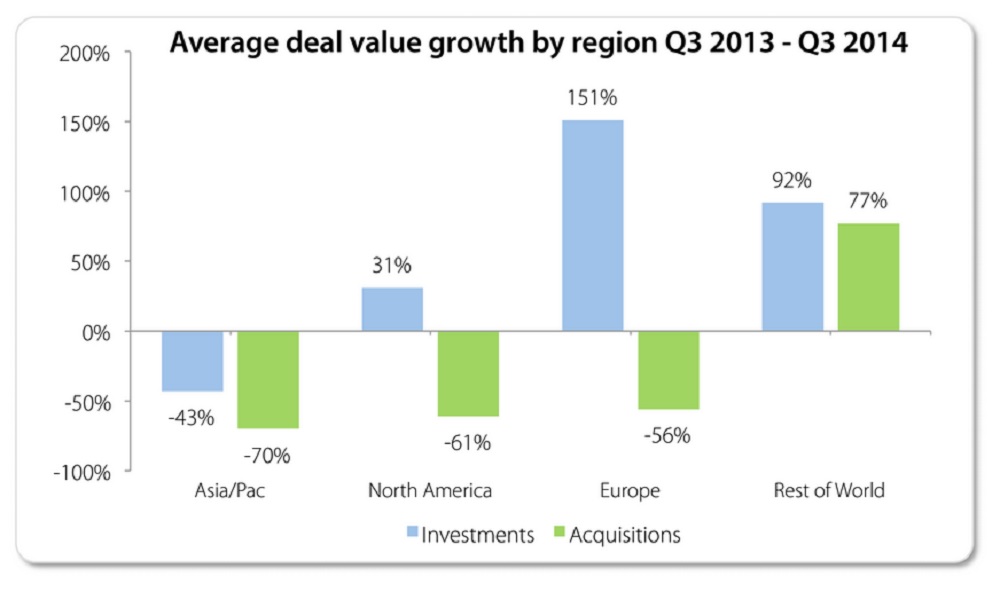 Above: Game deals by region

“I don’t know if we are in a bubble or not,” he said. “We are in a place in the interactive industry where a lot of people are trying to grab land. Land is measured in different ways, but it is often measured in terms of eyeballs and the popularity of a property. I don’t think Microsoft bought Minecraft for transmedia. They bought Minecraft because they know that people are still going to be playing Minecraft for a long time. It’s an incredible global community, and that has value for their games business and their media business. That drove the acquisition.”

But the casino and online gambling companies may feel the pressure to shop for mobile social casino game companies. The Chinese, the Koreans, the Japanese, and the Europeans want to get in on the action. Platform companies like Google, Amazon, Apple, Sony, Microsoft, and Nintendo are out shopping, if only to keep a valuable chess piece from falling into the hands of a rival. Games have become a global business, and companies are racing to become big in all regions. We also see a new generation of successful digital game companies, like Valve, Kabam, Zynga, King, Supercell, Rovio, and many others.

Hollywood can provide another set of buyers. Warner Bros. may buy game studios that can turn out more Batman or Lord of the Rings titles, or it may just make more investments into companies like Kabam. Lionsgate is investing in mobile game companies that can take its properties — the Hunger Games, Divergent — onto the smallest screen. Kim Kardashian: Hollywood, a hit game from Glu Mobile, may generate a huge percentage of Kim Kardashian’s revenues, thanks to the popularity of her mobile title. Disney may wake up and fund a lot of Star Wars games. Transmedia is working, particularly on mobile, and that is driving more deals. 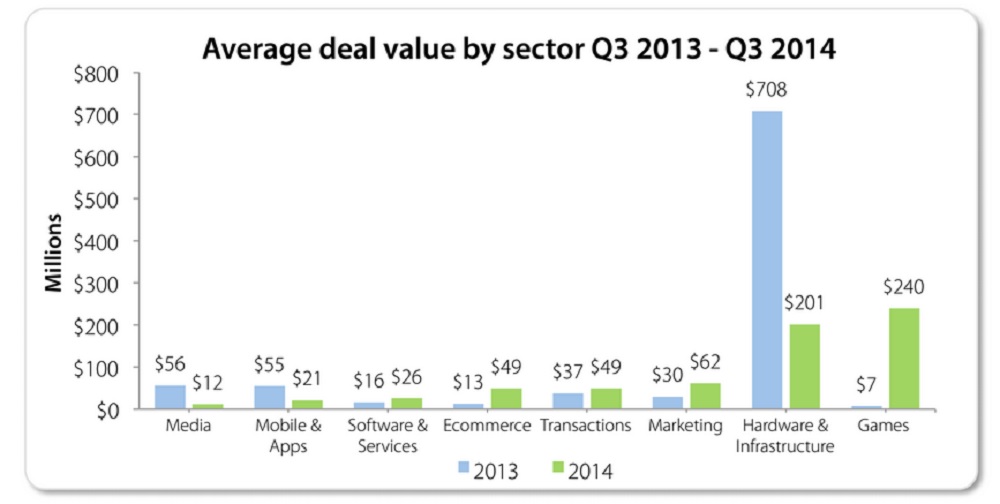 In short, the barriers that once isolated the game industry and game studios have come down. Many different companies can view game studios as chess pieces, and we see enough technological change associated with transitions in the game business to fuel more details. Each transition — like the shift from Facebook web to mobile, or from the PC to multiplayer online battle arena games, or from paid games to free-to-play games — is an essential ingredient in the deal frenzy.

As for why Facebook paid $2 billion for Oculus VR, a mega-deal that Offner was part of, Offner thinks it was based the belief that this would be the next big platform, not just for games but social, medical, industrial, and many other industries. Oculus has a chance to collect a lot of eyeballs.

This reminds me of the famous phrase created by Andy Grove, former CEO of Intel, in the 1990s. He said everybody was in a “war for the eyeballs.” But during the dotcom days, value was attached to eyeballs irrespective of revenues generated by those eyeballs. It was all about future potential, and that proved to be a house of cards that led to the dotcom crash of 2000 to 2002.

It seems like it’s wise to buy companies that are already generating revenues or could generate revenues. Under that logic, it was nuts for Facebook to buy Oculus, a maker of virtual reality goggles with no official product and no customers, for such a huge price. But it also would have been foolish to pass up the chance to being part of Oculus.

“Going to Oculus was one of the best experiences of my life, so not everything is logical,” Offner said. 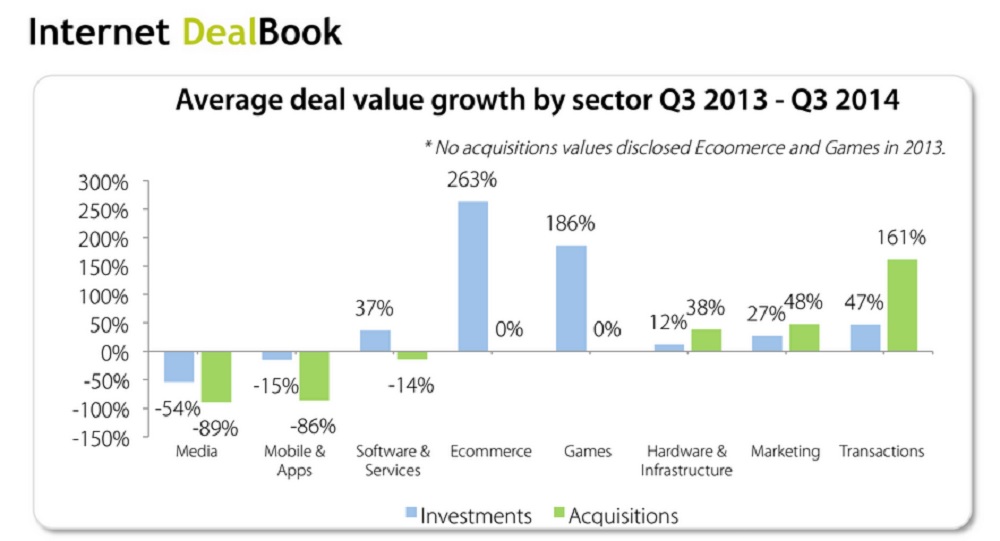 Above: Average game deals by sector