I was a fanboy for Ernest Cline’s Ready Player One book and the 2018 Steven Spielberg movie based on it. And so when the sequel novel Ready Player Two came out in December, I was all over it. Critics panned it, and I understand this sequel isn’t as innovative as the first book. But amid the bleak reality of the pandemic, I enjoyed reading how Cline envisioned the evolution of technology and the eventual creation of the metaverse, or the Oasis, the universe of virtual worlds that are all interconnected. It fascinates me to see how technology, games, and science fiction are all intertwined in a creative vortex that generates faster progress in each of these disciplines.

And next week, our own conference about the metaverse (you can sign up here) takes place, inspired by books like Cline’s as well as Neal Stephenson’s 1992 novel Snow Crash and William Gibson’s 1984 book Neuromancer, which defined the metaverse-like experience as a “consensual hallucination.”

Roblox CEO Dave Baszucki will speak at our event about his own dreams for the Oasis, which users have imagined inside Roblox in a treasure hunt promotion based on the new book. Millions of players have gone through that. Warner Bros. is in the early stages of making a movie based on Ready Player Two, though it’s not clear if Spielberg will come back for it. It may occur to Cline that, while Hollywood has been stalled by the pandemic, the video game industry is not, and making a Ready Player Two video game would make a lot more sense.

[This story has some book spoilers — Ed.]

The first movie made more than $582 million at the box office. And just last month, Roblox raised more than $520 million at a valuation of $29.5 billion ahead of a public offering, and that means that Baszucki has a pretty good war chest to build a kind of Oasis or metaverse as he wishes. And he has said he wishes to do so. 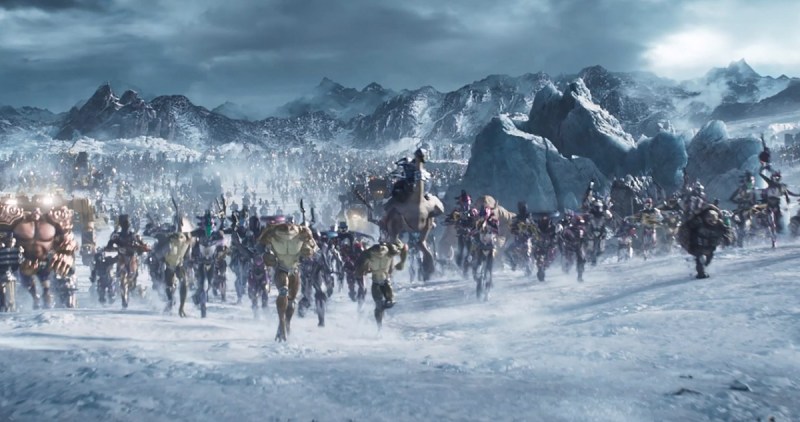 Above: A scene from Steven Spielberg’s 2018 movie Ready Player One.

When Ready Player One debuted in 2011, it was a prescient look at how virtual reality could become pervasive through society as everybody logs into a single online environment, the Oasis, where they live, work, and play. The book inspired people like Palmer Luckey, then a 19-year-old who had been building VR headsets as a hobby. Luckey envisioned how VR could be used in real life, and he went on to create the Oculus Rift. Facebook bought Oculus VR for $3 billion in 2014, and Luckey netted more than $700 million. Before Facebook made the acquisition, Cline visited Oculus and did book signings there. He saw that the conference rooms were named “The Oasis, The Matrix, and The Metaverse.” Facebook has spent billions more taking the Oculus tech to new levels and developing augmented reality glasses. And so, by the time Cline wrote his second book, the VR headsets he predicted were readily available.

In an interview with Baszucki in December, Cline said he was a fan of the Oculus Quest headset and watched films with his friends on an application called Bigscreen, a social VR app. Cline’s daughter is also a fan of Roblox, and she used it to stay in touch with friends during the pandemic, Cline said. Cline’s own enormous success with the books — Ready Player Two debuted at No. 1 on the New York Times Bestseller List after Ready Player One spent more than 100 weeks on that list — has helped him live out his fantasies. He owns multiple DeLoreans, the cars used in Spielberg’s Back to the Future films.

All of this mutual inspiration reminds me of what Jensen Huang, CEO of Nvidia, has told me multiple times: “We’re living in science fiction.” Huang refers to advances such as artificial intelligence, but his own company created a “metaverse for engineers” dubbed the Omniverse. With full physics simulations, engineers can use it to remotely design products together today, as the Omniverse is in beta testing.

While Cline’s books can be criticized as fan service, they provide us with cultural touchstones that gives us a common vision for how our future could unfold. Just as we loved Back to the Future‘s DeLorean time machine, hoverboards, and sneakers that tied their own laces, we now share the hope that something like Roblox or Fortnite will turn into the metaverse. Playing World of Warcraft, Cline was inspired by the fact that people fell in love inside the virtual world, and got married in real life.

In the novels, Cline depicts the Oasis as built by a single entrepreneur, James Halliday, a kind of Willy Wonka mogul, who builds the virtual universe with his friend Ogden Morrow. The Oasis is a walled garden, and Cline said it was built by a company that was “Google, Facebook, Twitter, and Amazon all rolled into one.” This company controls our collective imagination, and the Easter egg hunt that Halliday launches for his would-be successors triggers a race to control the Oasis. The sequel continues this, but with new technologies added.

The vision of ‘Ready Player Two’ 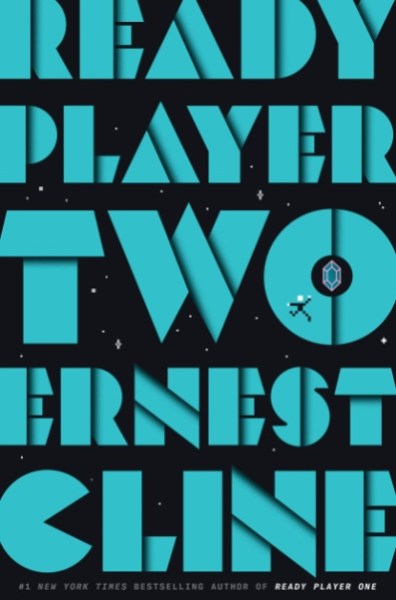 Above: Ready Player Two is coming on November 24.

With Ready Player Two, I reveled in the pop culture references. I thought it was cool you could visit a world based on J.R.R. Tolkien’s universe. The book didn’t dwell on the popular The Lord of the Rings novels. Rather, it focused on The Silmarillion, the prequel to LotR that I liked better. No one envisioned a virtual world as well as Tolkien did, and here it was simply a tiny part of a vast Oasis universe where fans could spend all of their time if they wished. That reminded me of one thing I want the metaverse to be: vast. If the huge world of The Silmarillion could exist on a single planet within the Oasis, which had so many planets within it, the scale of the whole universe would be astounding.

Ready Player One takes place in 2045, just shy of 25 years from now. That’s enough time to imagine much cooler technology than we have today, but nothing totally magical like we see in other science fiction worlds. While physical reality has become apocalyptic, people escape to the Oasis. (This reminds me of our own troubles today.) Ready Player Two happens in the same time frame, but this time Cline introduces a new way of interfacing with the Oasis — a new VR headset with a brain-computer interface dubbed the ONI. This device wires into your brain and your body, making it so that you can’t tell the difference between physical reality and virtual reality. You can feel touch feedback, smell things, taste things, and such. It is the logical destination of the VR technologies that we see today, from haptic touch that lets you feel virtual sex to virtual impersonation of other people so you can really feel like what it’s like to walk in someone else’s shoes.

Cline envisions streamers providing a service to people, who shared their own .oni files that other people could play. If they went traveling to some great place with forehead-mounted cameras, the followers could play that experience and see what it was like to be another person on a tourism journey. Cline predicted vast improvements in education as a result, as well as an improvement in empathy. You could, for instance, truly understand what it’s like walking a mile in someone else’s shoes. The flip side of this is that your actions in the ONI could always be recorded by someone else observing you, and so mutual surveillance could produce huge invasions of privacy, as you would never know if a streamer was recording you and revealing your actions to millions of followers.

Cline included plenty of warnings about the technology, similar to issues today like video game addiction and obsession, as well as relationship challenges that emerge when one partner is in love with the ONI and another isn’t. If you spend more than a dozen hours in the ONI at once, you can start suffering severe health effects. And so the technology forces you to get out of it if you exceed half a day. Yet these tools could also help people who are missing limbs feel what it’s like to have all of their body parts in VR.

Cline showed how deadly rogue AI could become, particularly if it could control an army of drones. And he gave us a peek into the future of real combat as ONI users operated war machines virtually so that they didn’t have to risk their own bodies as they hurtled into battle while operating drone controls. 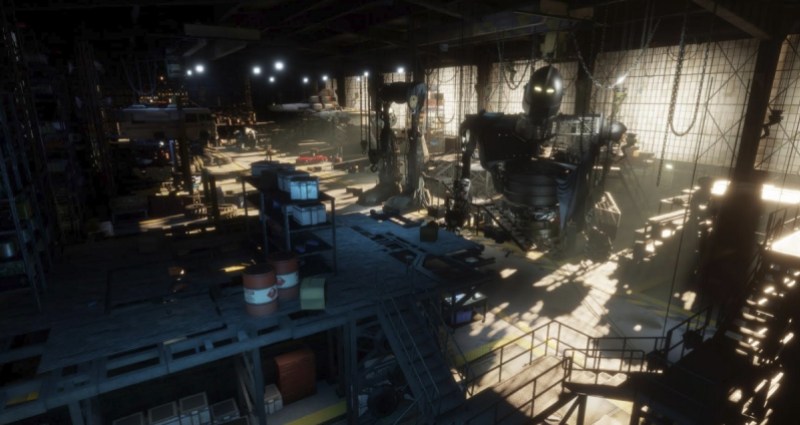 Above: Aech’s Garage in Ready Player One.

Perhaps the most intriguing technology that Cline talks about is being able to make a digital copy of a person. The ONI can scan your entire brain and capture all of your memories, experiences, and knowledge. You can take this digital copy and put it into the mind of a virtual character, who lives only in the Oasis. That virtual person would behave the same way as the real person it is based on, but the virtual person’s life would diverge from the real person’s, as time goes on. As such, it can move people into the post-human world, where our minds are freed from our bodies. We could meet a clone based on a certain point in our lives.

This notion of digital immortality and the post-human life is also explored in the plot of the recent video game Cyberpunk 2077, which Cline said he was itching to play on a PC.

This raises the prospect of digital immortality, a concept explored in other science fiction such as Black Mirror‘s mind-blowing San Junipero episode (Season 3, Episode 4 of the Netflix TV show series), as well as Frank Herbert’s Dune series, and Ramez Naam’s Nexus trilogy (I’m going to moderate a talk with Naam and Tim Chang on February 17.) Cline explores the ethics of creepy behavior like capturing someone’s identity without permission and then re-creating some kind of digital plaything, as well as the question of whether AI characters who have someone else’s memories have the same right to exist as people living in the physical universe.

Edward Saatchi, the head of Fable Studio, operates a Virtual Beings Summit that explores topics like bringing back a dead James Dean to act in movies and other uses for artificial people. These kinds of visions raise the kind of moral questions that we’ll have to figure out before we unleash the worlds and peoples who could turn out to be far more real than we could ever imagine.

I look forward to exploring these questions and talking about these technologies next week, at our Into the Metaverse/Driving Game Growth event with many of the players who have been inspired by Cline and are in a position to build some of the technologies that he’s talking about.

And for me, as long as we’re stuck in a world with an accursed pandemic and a Zoomverse, that future can’t come soon enough.