I’m always puzzled that game publishers don’t release more blockbuster titles in the summer. The movie makers have figured out that people have time to watch during the summer. But the releases for the deep summer are thin. After E3 and a nice vacation break, I finished off the 40-hour Watch Dogs game from Ubisoft, which released the title in May. And since I have no huge releases taking up my time, I’ve got a chance to look backward.

To entertain myself, I returned to Wolfenstein: The New Order, another May release from Bethesda Softworks and Machine Games. This was sort of like my catch-up week, where I would blast Nazis to the moon and lose myself in a classic first-person shooter game. Compared to endless open world of Watch Dogs, I figured Wolfenstein would be short and sweet. I’d peek around a corner, shoot a Nazi. Rinse and repeat. Just a little bit of binge gaming before things got really busy again. Our own reviewer wasn’t that impressed with the title. But I’m glad I went back to it. If you skipped this game because you were too busy, I’d recommend that you get back to it and finish it.

But I was both angry and pleasantly surprised to discover that Wolfenstein was really hard. I was angry because it’s always frustrating to fight the same battles over and over, against impossible odds. But I was pleasantly surprised because it was so challenging. It’s a fine balance. But I like difficult games that are hellacious, as long as they are beatable if you figure out the right way to attack. Wolfenstein was a challenge, but I’m glad it wasn’t as unforgiving and nightmarish to play as the Dark Souls games. 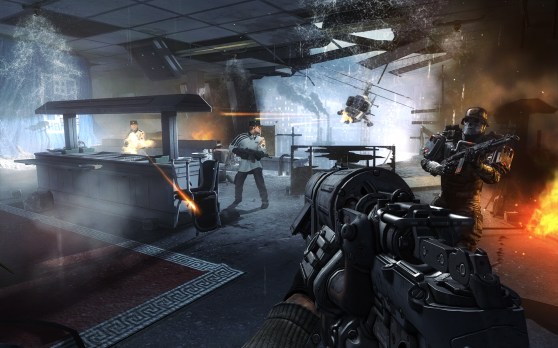 Above: Only three Nazis and a helicopter? What’s for lunch?

In this game, the Nazis have won World War II. You have to play the last surviving American fighter, William “B.J.” Blazkowicz, who is injured in the war and is in a coma for 14 years. He wakes up with the Nazis in total control of the world and on their way to conquering space and the moon. The game is a difficult shooter, but it also has a complex story and some interesting characters, both on your side and on the German side. In contrast to the old Wolfenstein game from the 1990s, this isn’t purely a one-way corridor quest. You have large fighting spaces and multiple options to clear them. You can go in with guns blazing, or just use stealth and a knife.

The enemies are also difficult. The Nazis have developed some great personal exoskeleton armor, some dangerous weapons, heavy-duty helicopters, beefy mechs, and horrors such as giant robot dogs. The behavior of the Nazi characters is so heinous that you really do want to get the satisfaction of taking them out. The characters are reminiscent of Inglourious Basterds. But it’s so hard to get to them and kill them because there are so many tank-like soldiers and robot dogs to clear out of the way first.

I was also surprised that Wolfenstein just never seemed to end. After I shredded hordes of bad guys and monstrous villains, I met some more of them. They shredded me. I was reborn over and over and eventually, during one of these Ground Hog Day experiences, I figured out what I was really supposed to do. A couple of times, I had such a hard time that I consulted a video walkthrough of the game on YouTube. Yeah, I felt bad for cheating. But then I got over it. I went through some very difficult boss levels where I had to take down armored Nazis as well as hordes of machine gunners. And this got harder and harder about three quarters of the way through the game.

Above: You can detach turrets from their stands and carry them around for a little while.

Wolfenstein was so difficult that I would finish a really hard level, thinking I was close to the end of the game. Then I would embark on an even harder level. This started when I got to the moon. Yes, the game sends you to the moon in pursuit of Nazis. And then I came back, and the fighting was even harder on Earth. Some of these fights were like taking on the Big Daddy characters in BioShock. And then I would run into a boss character who was the real Big Daddy — an impossible to beat fiend.

I had the good fortune last year of trying out Machine Zone’s demo of the hangar level of Wolfenstein. With a developer hanging over my shoulder, I kept turning left to run into the ammo room at the start of the level. After about 30 times, I turned right and headed up the stairs. That turned out to be the right thing to do. But I still died another 20 times trying to fight upstairs. I took out a big robot and moved into another difficult level. There were all sorts of bad guys — like flying drones that you had to take out with a shotgun — that I had to dispatch. Some of them took a ton of ammo to kill, and that meant I had no ammo left for the next kill.

After I finished the hangar fight, the developer told me, “Yeah, we made it too hard. We’ll make it easier.” Fast forward a year. After that feedback, I expected the “normal” level of the game to be toned down. It would be an easier play experience. But that was not the case.

Wolfenstein is a big game with 16 major chapters. The length of the campaign came out to be about twice as long as your typical Call of Duty single-player campaign. And there was one part on a bridge where I had to walk along a beam and try to reach the other side without falling to my death in the sea. I walked. Then I fell. B.J. said as he fell, “Stupid way to die.” I think I heard him say that about 30 times as I tried to walk across the beam. Then I figured out that I really didn’t have to talk on the beam. There was another way around the obstacle.

When I discovered that path, I was ecstatic. And then I was mad. Because I blamed the game developers for putting me in an impossible situation, and then doing very little to help me out of it. There was no red flag telling me I had to go around the obstacle. It’s like they wanted me to fail over and over again, just so that I would stay more engaged with the game and really desire the reward when I finally beat the level.

I was committed to finishing this game. I wanted to find out how the story ended. I wanted closure. But the game developers took a real risk in making their game so hard. They could have lost me. And I’m sure they’ve lost a lot of other gamers. I stayed longer than I should have. Perhaps I’m one of those completionists. But there’s a fine line between giving a gamer exactly what they want and challenging them. Or throwing so many obstacles in the way that they will give up and move on to an easier game. I would prefer something a little less difficult, but I was glad it was harder than your typical mobile game.

As mobile free-to-play game companies steal talented hardcore game designers like Cliff Bleszinski, the Gears of War game designer who is now creating a new game with Nexon, they should not try to make mobile games as difficult as hardcore console games. Otherwise, they’re scare everybody else off, and the audience for games will shrink. In the meantime, masochist that I am, I really enjoyed Wolfenstein: The New Order. If you’ve got some time on your hands, you should go back and play it. But it will take you twice as long to finish it as you might expect. 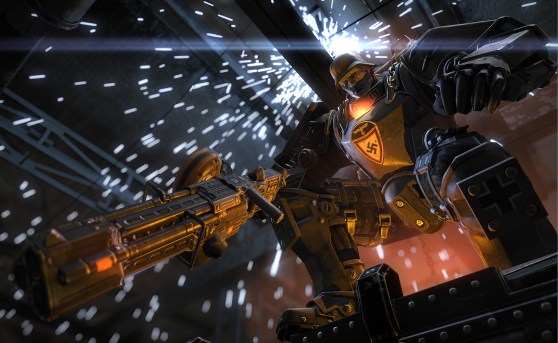 Above: These Nazis are obsessed with making people bigger and more mechanical. This guy’s practically a Big Daddy from BioShock.