Geopolitics has a way of intruding on gaming. Wars and crises make great fodder for video game storylines, but they’re also disruptive and scary to game development teams that are stuck in the middle of real-world hot spots. The frightening intrusion of the terrors of war and political crisis have taken a toll on Ukraine and Israel, and that was evident at the Casual Connect game conference this week in San Francisco, where more than 3,000 game makers gathered to talk about the craft and business of casual games.

Shai Magzimof, the chief executive of Nextpeer, a multiplayer mobile gaming network, viewed his visit to Casual Connect as a welcome relief. But he almost didn’t make it out. At the Ben Gurion Airport in Tel Aviv, he saw a rocket attack overhead. While others headed to the bomb shelter, Magzimof decided to go up to the roof and film it with his smartphone. For those few minutes a day when those rocket attacks prompt air raid sirens and trips to bomb shelters, it’s scary. But it’s also part of life. Two of Magzimof’s employees have been called up as reservists in the Israeli armed forces.

“It is scary, but we try not to let it stop us,” Magzimof said in an interview with GamesBeat. “It’s stops us a couple of times in the middle of the day. I have to be honest.”

Making games in war zones is one of the consequences of gaming going global, which is the theme of our GamesBeat 2014 conference. Like Magzimof, Elad Kushnir, vice president of business development at Caesars Interactive Entertainment’s Playtika in Tel Aviv, said he was absolutely relieved to be at Casual Connect.

Most of the game business is in Tel Aviv and north of it, away from the fighting. Israel has more than 200 game companies and hundreds of tech companies, according to Invest in Israel, a program of the Ministry of Economy in Israel.  As far as I know, Gaza doesn’t have game studios.

“It’s usually temporary,” said Guy Bendov, CEO of Side-kick Games, a maker of motion-sensing games and founder of GameIS, an association that promotes the Israeli game market. “Every five to ten years, there is a lot of tension and it blows up. What is really unfortunate is the cycle. But when it happens, it takes a few weeks. We are happy we can fly back home.”

“It gets horribly routine,” added Goldy Gold, game designer at Playful Shark in Israel. “There’s constant fear. But it’s not like we can’t operate. We get a lot of empathy here. We adapt. We are a nation of survivors.” 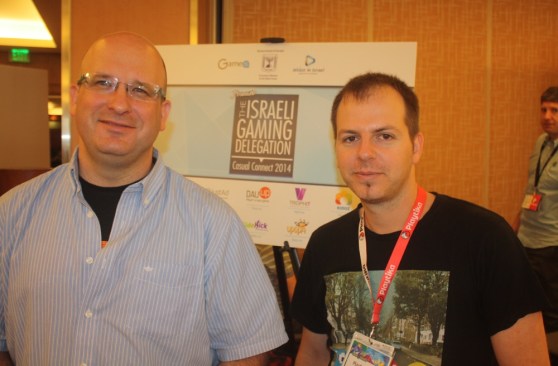 Above: Guy Bendov of Side-kick Games and Goldy Gold of Playful Shark

Ukraine has more than 200 game companies, among the highest in Eastern Europe, thanks to a strong base of programmers, scientists and other university graduates.

So far in the latest Gaza war, Israel has lost 32 people, while more than 800 Palestinians have perished. For a country of just 7.7 million people, that’s a big toll. Were it not for the Iron Dome anti-rocket system, the death toll would surely be higher in Israel. Magzimof wanted to see those Iron Dome missiles in action, which can travel faster than the rockets and intercept them in mid-flight.

“We keep making games and live our lives as normal,” said Oded Sharon, a game developer in Israel who has posted a couple of pictures of rockets being taken out by Iron Dome missiles. “A few times a day, we hear an alarm, go to the shelter, and hope nothing happens. Most of the time, nothing happens. Sure, it’s scary. Especially when you have kids…. Hearing explosions is also scary.”

Ukraine has been in political turmoil since November 2013. Tension between those who wanted ties to the European Union and those who wanted to be close to Russia turned into civil unrest. By February, riots and the police crackdown on them left 98 dead. Anti-government protesters drove the president and government out of power, and by March, Russian troops moved in and took over the pro-Russian province of Crimea.

That was where Arkadium, a New York-based casual games company, had a game studio with 90 employees. Overnight, it switched nationalities from Ukrainian to Russian. The company suddenly had to deal with changes in banks and other business support. Its political ties to the government were gone. The staff in the city of Simferopol agreed with Russia’s annexation, so the company didn’t have any turnover as a result of the Russian takeover.

“During the crisis, we lost about 15 percent efficiency because of the political distraction,” said Kenny Rosenblatt, chief executive of Arkadium. “We are in the midst of changing our official company structure from an Ukrainian organization to a Russian one. This process has been long, costly, and detailed, but ultimately a better outcome than war.”

During the sharpest part of the crisis, the company sent five employees to New York to ensure no major deadlines would be missed. Arkadium no longer sends employees to visit Crimea. The silver lining is that under Russia, the taxes are lower. And the Crimean team released a jigsaw puzzle game on Windows 8, and the title hit No. 1.

Other companies weren’t lucky. Henry Oh, a game industry veteran, said one of his friends lost a whole studio because its building was bombed in Ukraine. The employees quit.

Game makers that had operations in Ukraine were Crytek (which made Warface in Ukraine), Wargaming (World of Warplanes), 4A Games (now Deep Silver, maker of Metro 2033), and GSC Game World (maker of S.T.A.L.K.E.R.). Big Israeli game companies include Plarium, Funtactix, Tab Tale, Side-Kick Games, Nordau Creative, and 888 (a real-money gambling company).  Everybody has had varying degrees of disruption.

Given all of the action, you might expect the game makers in Israel to create combat games. Instead, many of them are making more soothing content, like social casino games, Bendov said.

The crises in both Ukraine and Israel are linked. Bendov said some Ukrainian companies relocated their employees to Israel when things started heating up in Kiev.

“In Israel, the team (whoever wasn’t drafted) keeps working as usual, evacuating to shelter during alarms,” said Leonard Frankel, head of business development at Plarium. “Some of our Ukrainian teams had to relocate to safer areas. I know that they keep to strict non-political communications, as even within the work force, opinions go both ways.”

Like Plarium, Playtika, a Tel Aviv-based maker of social casino games and a division of Caesars Interactive Entertainment, also has a double problem. The company has more than 750 employees, including a large chunk at its Israeli headquarters and a big studio in Ukraine. 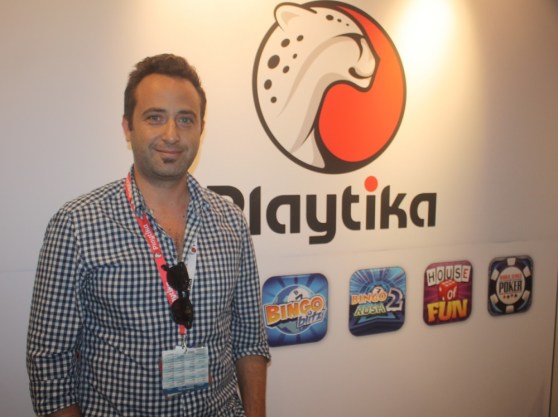 Above: Elad Kushnir of Playtika

“We found ourselves in hot spots,” Playtika’s Kushnir said. “But all the teams are working and happy.”

Traveling to and from war-affected countries is affected, and that has hurt business productivity. Some investors would like to see Israeli companies diversity their workforces to other countries.

4A, the maker of Metro: Last Light, is moving its offices to Malta. And during the months-long crisis, Game Insight moved its headquarters from Moscow to Lithuania.

But since the crisis started, Israeli companies are faring well on the stock market, and some are even filing to go public, said John Medved, an investor in Nextpeer and many other Israeli tech companies, in a recent appearance on CNBC.

And most of Israel’s game and tech companies have deep roots. The Israeli military has always put a lot of emphasis on technology and so have the game companies.

Casual Connect’s organizers decided to move the upcoming Casual Connect Eastern European conference in November from Kiev to Belgrade in Serbia, a country where travel is easy as it does not require a travel visa, whether you are coming from the East or the West. There is no real game business in Serbia, which was also racked by war in the past decade. But now that it has Casual Connect Belgrade, it could very well sprout its own game studios.

While war is disrupting games in some countries, it may create game businesses in others. Games and game developers keep finding ways to survive and thrive. It makes me feel like we are all sailors on the seas of fate. I hope one day that we can all be lucky enough to live in a place where the only wars are the ones we fight in virtual worlds.