In 2010 and 2011, the development team at Guerrilla Games in Amsterdam surveyed the landscape of video games. They had just shipped the sci-fi shooter Killzone 3, selling in the low millions of units. It was successful enough to give the studio — which was the only surviving Triple-A company in the Netherlands — another chance at making a big game.

But the small team saw the increasing investment that was required to stay competitive in the first-person shooter market. They saw that Activision Publishing was investing more in Call of Duty with its monstrous hits Black Ops and Modern Warfare, and it was adding more studios to make these games. Was there still room for a relatively small team to produce exclusive titles for the PlayStation in the shooter business?

“If we were going to do this, we needed to get better at it,” said Angie Smets, executive producer at Guerrilla Games, in a fireside chat with me at Gamelab, the game event in Barcelona, Spain, this week. “We looked at the things that hadn’t gone so well. The question was how many more Killzones we wanted to make.”

She added, “It looked impossible for us. Battlefield was also there, starting to take off. If we come up with another shooter, is this a good idea? Probably not. It was a saturated market.”

So the team started looking into other ideas. They collected 40 proposals from their team members. They evaluated which ones looked good. About 20 developers started making prototypes at the outset. They settled upon two games. One was a beat-em-up game called Dark Silence, which wasn’t so different from the dark world of Killzone. Another was a beautiful post-post-apocalyptic game, with a beautiful green world that looked promising as the earth renewed itself after humans turned it into a wasteland.

The action-adventure role-playing game starred a female protagonist, a young princess-like girl with red hair named Aloy. It bore some alarming similarities to another game announced by a competitor, Ninja Theory’s Enslaved. Outsiders at Sony favored Dark Silence, which wasn’t so different from what Guerrilla knew. Just to be even safer, Sony decided to greenlight another Killzone title, Killzone Shadow Fall, which would consume half of Guerrilla’s 150-person team.

But hands-down, Guerrilla’s team voted in favor of the other game, which would come to be called Horizon Zero Dawn. It was a crazy idea about humans battling robot dinosaurs, but they felt it was going to be a lot more fun to make it, Smets said. It was a brand new intellectual property.

Fast forward seven years, and Sony shipped Horizon: Zero Dawn. It debuted in February 2017 on the PlayStation 4 and sold more than 7.6 million copies in its first year — several million more than any Killzone game had ever sold. It had an average Metacritic score — the aggregate of game critics — of 89 out of 100. It cemented the future of Guerrilla Games as one of 13 studios owned by Sony supporting the PlayStation hardware.

As the game business tops $137.9 billion in global revenues, more than half of it is generated by smaller projects such as mobile games. But believe it or not, studios like Guerrilla are making huge risks on the order of $50 million or more at each swing of the bat in console games, said Shawn Layden, chairman of Sony Interactive Network’s worldwide studios, in a separate talk with Mark Cerny at Gamelab. 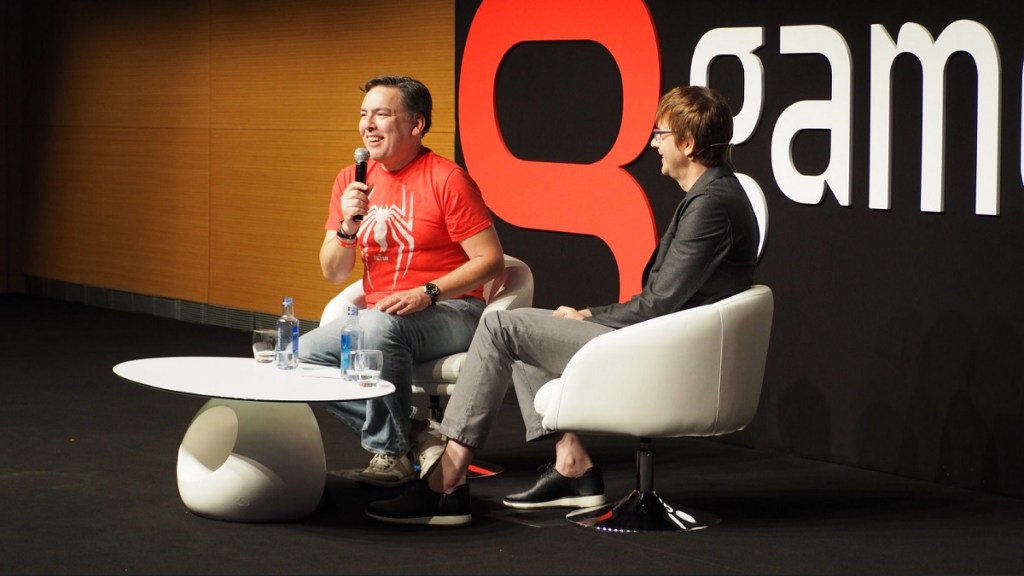 Above: Shawn Layden of Sony and Mark Cerny of Cerny Games at Gamelab.

“It’s difficult. Back in the day, when games were costing $2 million or so, you could take 12 or 15 shots on goal to make five,” Layden said in his fireside chat. “But with the price of games going up two orders of magnitude, you’re looking at getting to take seven shots on goal to make five. You have to take smarter risks. You have to understand your market better. We do a lot of research about games before we create them – not only technically, but market-wise. We have different stages throughout the production cycle where you have to decide to go or no-go.”

He added, “Greenlighting is a tricky part of the business, but sometimes redlighting is the hardest part. You have to tell someone who’s spent a lot of time on something that it just isn’t working. You have to stand that down and do something else. We do, at Worldwide Studios, have a lot of scope for that kind of risk-taking. It’s not one strike and you’re out. We’ll give you a chance to try new projects too, even if the one you just had to stop working on wasn’t as successful as you’d like it to be. But it’s not for the faint of heart, that’s for sure.”

And Layden said, “Because again, the cost of entry and the cost of continuation is so high. Sometimes you have to take a huge write-off and move on quickly to the next thing. That’s true for all developers. That’s not specific to us. It’s everyone here. Every developer in this room knows what that’s like. We’re taking bigger bets. We’re spending a lot more money. It’s taking more time. More time just to get to proof of technology, proof of concept. You can get millions of dollars into the process before you prove that out. But still, games cost only $60. It’s a changing business model, certainly, for the games community.” 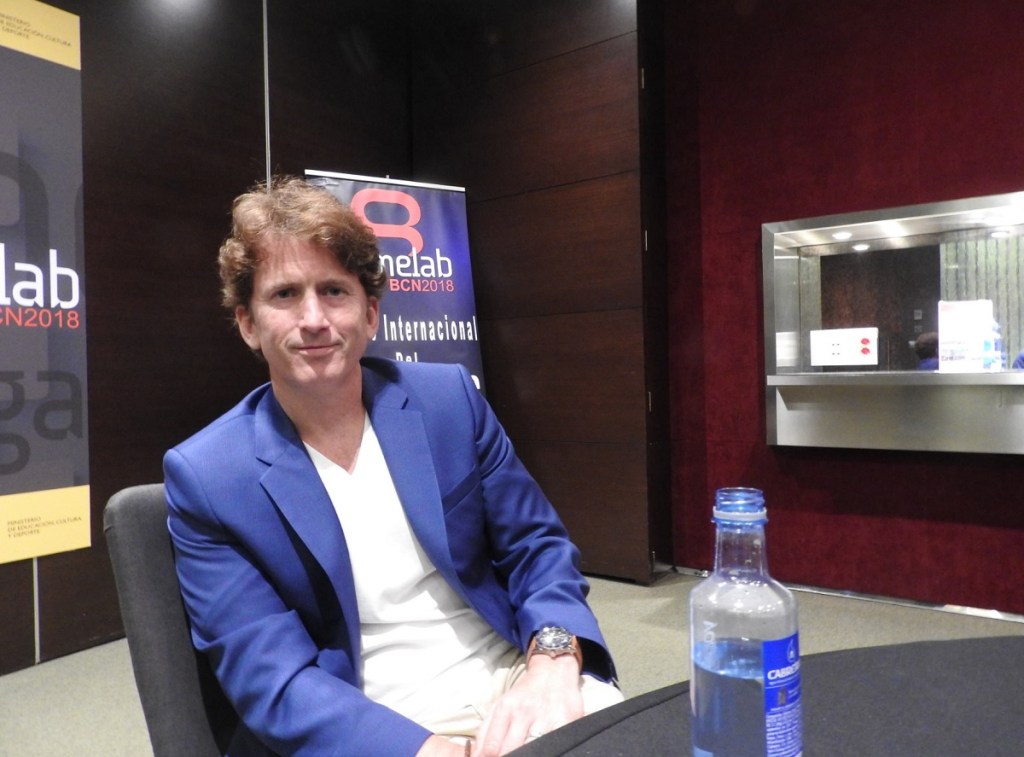 It’s not just at Sony where these bets are happening. Todd Howard, director of Bethesda Game Studios, said at Gamelab in a fireside chat with Geoff Keighley that his team rolled off of the successful Fallout 4 and finally started going full tilt on Howard’s first original title at Bethesda, a sci-fi game called Starfield.

“The idea is to keep being ambitious. … Playing it safe is the worst way to do things. [The Elder Scrolls III:] Morrowind was hard. It was our first time on console. If it didn’t do well, the company was probably out of business. [The Elder Scrolls IV:] Oblivion was really difficult. We really pushed the tech. I liked that line in the movie Shakespeare in Love: How is this going to work out? I don’t know, but it always does.”

He noted why it’s becoming easier to bet so much on games. 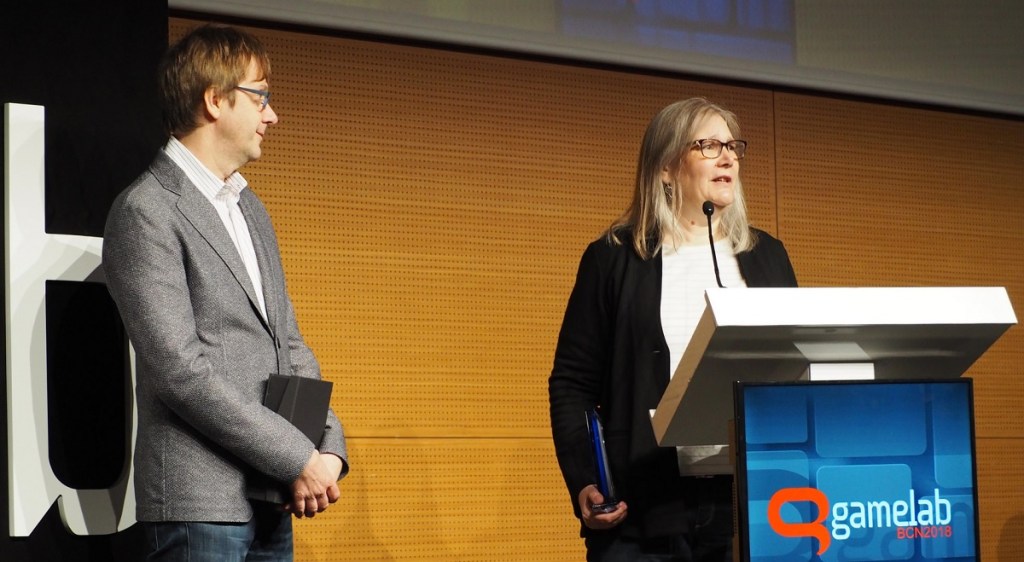 Above: Though her latest game was a failure, Amy Hennig received an award for her career making great games at Gamelab.

Amy Hennig, who received an award for her career making games such as the Uncharted series, worked on a Star Wars game at the Visceral studio at Electronic Arts. The game wasn’t coming together, EA shut it down, closed Visceral, and Hennig left EA in January. She acknowledged that it can be hard as a creative director, as no single person can really control the creation of a game, and that you can’t stay “in white knuckle” mode as if you hands were gripping an enormous steering wheel. She admitted that it can be “terrifying” to try to make such huge games.

Fortunately for Guerrilla Games, no one at Sony said no to Horizon: Zero Dawn. As other studios were flooding the world with gray-tinted zombie apocalypse games that showed the somber future, Guerrilla looked further into the future, dubbed the “post-post apocalypse world.”

“The first humans messed everything up, and nature takes over, and we started again,” Smets said.

It was different enough, but when it was being envisioned seven years ago, Horizon had so many elements that gamers would come to favor in games. It had a female hero in Aloy — something that has become increasingly popular with growing diversity among the world’s players.

Guerrilla had redesigned its Disney-like princess to be much stronger and independent. Over two years, the character was fleshed out. She wore normal, protective clothes, rather than a skimpy outfit that accentuated the female body, as was common in the past. Aloy took dinosaur robots down with a bow, and she could hack into creatures and ride into battle on a mount in an open world which seemingly had no end. The character was voice-acted by the actress Ashly Birch, who delivered an outstanding performance, Smets said. 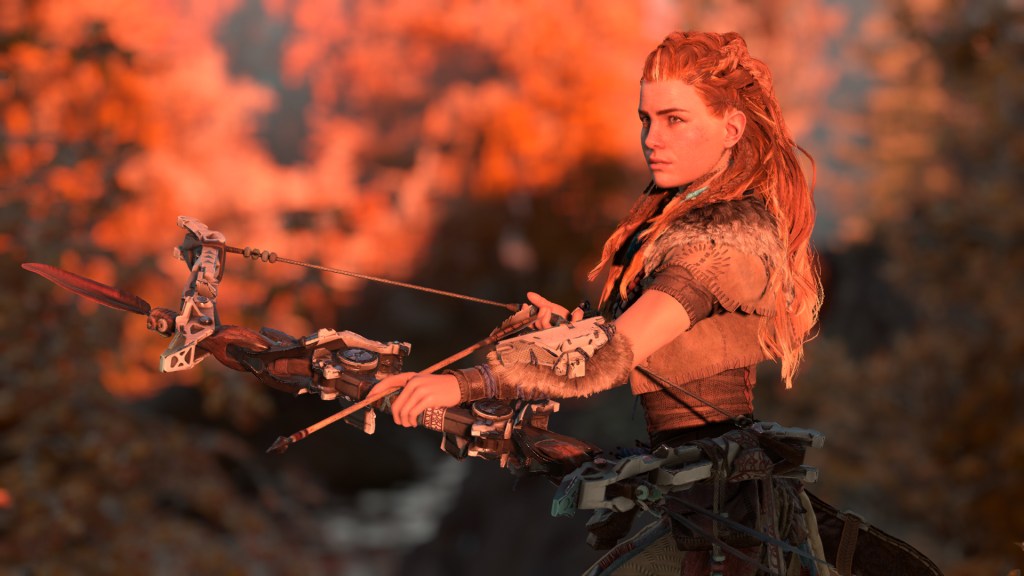 Above: Aloy has become an inspiration for female characters.

Women were inspired by this character, which the studio never debated and never backed down, even when other suggested the character be a man. Even today, more than a year and a half after launch, Guerrilla knows of 250 active cosplayers who perform as the red-haired female protagonist, Smets said.

It was not just a character, though. It was a huge world that Guerrilla built over seven years. When I was done playing the single-player campaign after dozens of hours, I was only done with 32 percent of the content of the game.

The success of Horizon almost ensures that Guerrilla Games can stay in business, and news media outlets and consumers in the country have realized what a rare treasure its only Triple-A studio has become. Guerrilla hasn’t announced a new Horizon game yet, but that’s almost assured.

And Horizon’s game engine, Decima, which also powered Killzone Shadow Fall, was used and modified in the successful game Until Dawn, from Supermassive Games, which was my favorite game of 2016. The engine also got the once over from a team led by Hideo Kojima, a renowned game creator who made the Metal Gear games and now has a bizarre and ambitious new title in the works, Death Stranding. Smets said the Guerrilla team considers it an honor to work with Kojima and an enormous compliment that he decided to use its technology.

With seven years going into making Horizon: Zero Dawn, and 10 years so far on Starfield, it seems like it’s easier to get a Ph.D. It might seem scary and intimidating to young game developers that so much work has to go into making these big games.

“It’s intimidating, but it’s also a lot of fun,” Smets said. “You wonder how you will ever resolve this. But there are so many moments where you feel there’s something cool here.