I am delighted that Titanfall has debuted so early in the cycle of the Xbox One video game console. It is a polished sci-fi first-person shooter multiplayer game that makes it a thrill to plod around in a giant robot and destroy the puny little humans around you — or to be one of those puny humans and bring down a Titan. It was the No. 1 game in the U.S. during its debut month in March, even though it was available only on the Xbox One and Windows PCs. 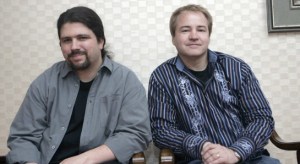 The game is a refreshing and innovative addition to the multi-billion-dollar first-person shooter genre. And yet, I’m surprised that the game was made at all, even though it was created by the fathers of Call of Duty, one of the bestselling video game franchises of all time. In less than three years, Respawn Entertainment created something that was as impressive to fans as games that were in production for twice that long.

The game is a technical and creative marvel. But what surprises me was the amount of drama and the short timeline that Respawn Entertainment, developer of Titanfall, had to endure as it raced to complete the title, as related in Geoff Keighley’s new story-app, The Final Hours of Titanfall. Based on the insider tale, Titanfall could have died a dozen deaths, including being torn apart by a fracture between its cofounders.

I’ve played around 19 hours and leveled up to 46. I consider that an accomplishment, as I rarely have the time or desire to play games for so long in such a short time frame. I have played 128 games, killed almost 2,000 enemies, including 390 pilots and 157 Titans. I consider that a good record for an older player.

Respawn was born from a legal nightmare. Vince Zampella and Jason West, the leaders of the Call of Duty: Modern Warfare franchise at Activision’s Infinity Ward studio, were in negotiations to create the next Modern Warfare when Activision fired them for trying to start another studio while still employed at Activision. They filed a suit, claiming Activision owed them more than $36 million in royalties. Activision countersued. Out on their own, they formed Respawn and got backing from Electronic Arts.

Above: Titanfall was March’s biggest release. Did that translate into sales?

About 10 months into the programming and design, Respawn decided to get rid of Insomniac’s Ratchet & Clank engine and return to Valve’s Source. That meant they had to toss out a lot of work, but they could return to a familiar platform that would allow them to prototype and test gameplay and find out more quickly what was going to be the fun part of the game.

The lawsuit took its toll. New employees had to watch a two-hour “protecting trade secrets” video twice before being allowed to see the game. Both West and Zampella had to spent a huge amount of time dealing with lawyers and depositions, as hundreds of millions of dollars were at stake in the court case because of the value of Call of Duty.

But one of the ideas that pulled the team together was “no shooter for old men.” That meant that Call of Duty had millions of fans, but so many of them were adolescents and young adults who had the quickest reactions. They could dominate the games and make battles hellish for the less capable “newbies.” Call of Duty was great, but it had become too intimidating.

That led to ideas like the smart pistol, which could automatically target multiple enemies and dispatch them all at once. The team decided to insert AI-driven grunts who operate in fire teams and are sitting ducks for human players to pick off. And whenever a newbie got into a Titan, he or she could dominate the battlefield until the smaller pilots teamed up and took it down. This gave the newbie more of a fighting chance.

The result is great for players like me, who are shooter fans but don’t have the reflexes of youth. I can play a match of Titanfall and emerge with twice as many kills than deaths. That’s because I may shoot one or two pilots, destroy one or two titans, and take out 10 or 15 AI grunts. I might die five or ten times, but the thrill of doing more damage to the enemy than I take keeps me coming back. I have yet to throw my controller at the wall out of anger or frustration. In Call of Duty, I get killed about ten times for every four kills.

When Respawn showed its first working prototype of these ideas to EA, it had less than 14 months to complete the game. The team surrendered to the inevitable and dropped the single-player campaign. After all, at its peak, Respawn had no more than 75 people and a limited time span. Activision’s Call of Duty teams and Ubisoft’s Assassin’s Creed crews were larger than 500 people. That was how those games shipped every year.

But Respawn was ambitious. When Microsoft came calling and disclosed that Durango, the code name for the Xbox One game console, would ship in the fall of 2013, the Respawn team liked the idea. Call of Duty 2 had shipped at the dawn of the Xbox 360, and it was the smash hit on the machine.

Above: The giant Titans and nimble pilots are both fun to play for very different reasons.

During the production, Steve Fukuda asked founder Jason Ward, “Give me the sword.” That meant he wanted to take over the project, as West had become consumed with defending the company against Activision’s lawsuit. That lawsuit and other strains created a rift between the cofounders, West and Zampella.

The inevitable breaking of their fellowship was postponed by their fascination with making the title into an Xbox One exclusive. That bought them extra time and the ambition to think bigger with their graphics and computational goals.

In May 2012, the Activision lawsuit was about to go to trial. A settlement on the eve of jury selection finally lifted the legal cloud. After tens of millions of dollars in legal fees and countless hours, Respawn and its leadership was finally free to work exclusively on Titanfall. But when West returned to take back the reins of the project, he found his leads and employees in open rebellion. They wanted him out. Zampella, who hadn’t repaired his relationship with West, was ready to bail out.

They went to EA chief executive John Riccitiello and told him about the disintegration of the project. He and EA executive Frank Gibeau pushed back and asked Respawn to take another run at pulling itself and the game together. They moved forward with a multiplayer-only game that had single-player story elements in between missions. West left Respawn in February 2013, and Riccitiello left EA in March 2013. It was up to Zampella, Fukuda, and the team to finish.

When they showed the game to Microsoft, it liked what it saw and bid to make it an exclusive. Sony wasn’t even ready to describe the PS4 and so it was out of the running to get Titanfall. EA brought in a separate developer, Bluepoint Games, to make an Xbox 360 version. In June 2013, Titanfall was shown off for the first time to crowds, and it won almost universal praise from critics, as if it were the Halo of the next generation consoles. The developers added combat equalizers such as heavy weapons that could enable pilots to bring down Titans. The game was now fast and responsive, and it played beautifully. It won Game of the Show from the E3 Game Critics Awards group, which includes GamesBeat.

Unfettered by the lawsuit and leadership struggles, Respawn made a sprint for the finish line. It couldn’t make the Xbox One launch in November, but it churned out a beautiful game that debuted on the Xbox One and the PC on March 11. The Xbox 360 version debuted on April 8. That should help the game hit greater volumes, as there are 80 million Xbox 360s in the field. The title got great reviews.

Gamers are lucky to have such a title. What they wound up with was, in my opinion, a game that is fun and in many ways tops the multiplayer experience of Call of Duty, which hung around the team’s necks as the game experience that they just had to top. My hat is off to the team for accomplishing this goal while in a constant state of uncertainty.

It’s not perfect. And I’m not sure how much longer I’ll play it without more content. But I’m very glad it saw the light of day.