When the blockbuster film Jurassic World: Fallen Kingdom debuted on June 22, it came with a bunch of Jurassic World games. Normally, based on video game industry history, that would be cause for alarm, as most movie games suck. But in this case, the games are turning out to be both profitable and a boost for the Jurassic World franchise.

That’s the view from Chris Heatherly, executive vice president of games and digital platforms at Universal Brand Development. He joined Comcast NBCUniversal after leaving Disney in early 2017, and his charter has been to build a game business based on Universal’s film portfolio. Heatherly has built the this team to 60 people, and they’re working closely with external developers on new titles.

“I was very fortunate to arrive when timing was good for Jurassic World,” Heatherly said in an interview with GamesBeat. “We saw it as a showcase for what we can do as an organization. We can show the company and gamers too.”

When Heatherly arrived, the company was kicking into high gear for the Jurassic World film, and he set a bunch of games in motion. They include Jurassic World: Evolution, a park building simulator that has already sold more than a million copies on the PC and consoles. The game is one of the top-selling titles on Steam so far this year.

Heatherly said that the company has also been successful as co-publisher with Ludia on the Jurassic World: Alive augmented reality mobile game, where you can wander the real world and encounter dinosaurs in the wild. 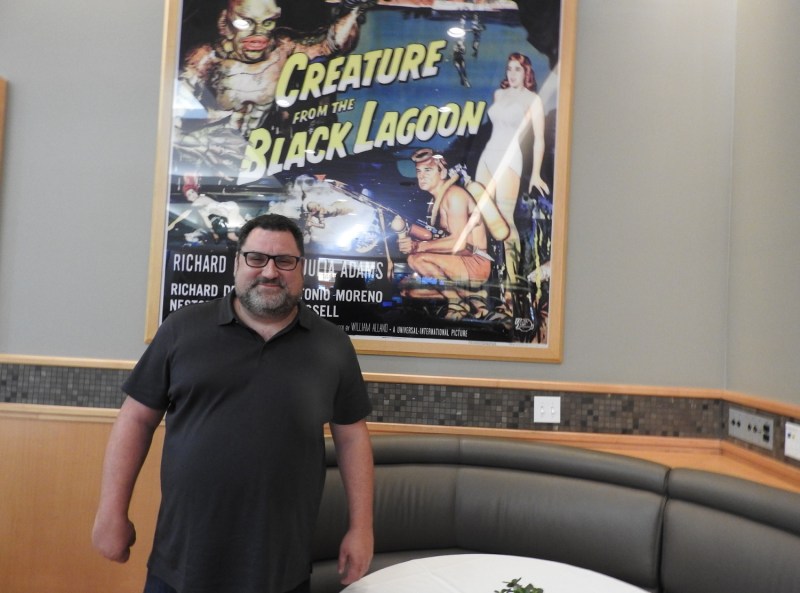 In the experimental realm, Universal also launched Jurassic World Revealed, a voice-driven experience developed by Earplay (a maker of interactive audio stories) for the Amazon Alexa. And it created the Jurassic World AR camera effect for Facebook and the Rocket League Jurassic World Car Pack integration on consoles. NBCUniversal is tying everything together through its “symphony” marketing efforts, which is its own brand of cross-division collaboration.

That’s a lot of games, and they have expanded Universal’s digital footprint across a lot of platforms where modern consumers are engaged. It’s as big a broadside you’ll see from any game company these days, with the possible exception of what’s to come from the $71 billion Disney Fox merger, which will bring together brands like Toy Story and The Simpsons.

This is just the beginning for Universal, which has a couple of more games to come this year and four to six more projects in 2019. And it’s about time, as we are long overdue for a revival of movie games that aren’t shitty. 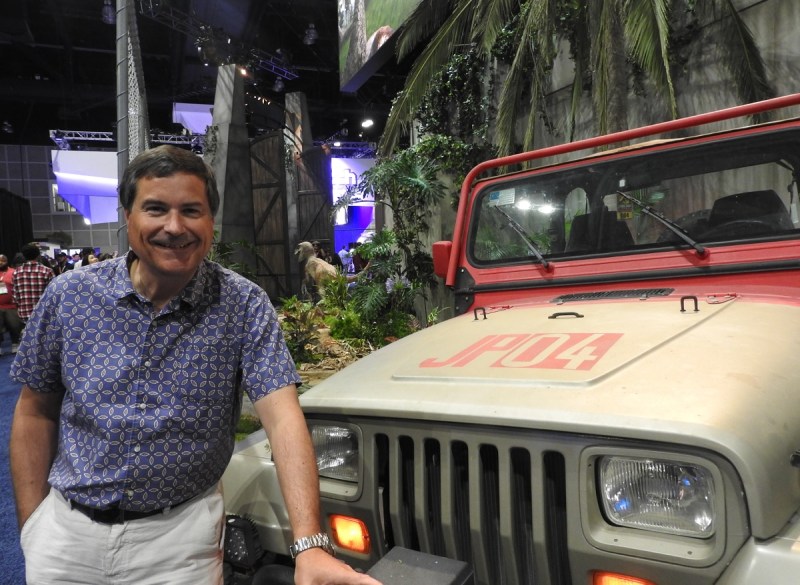 The key to doing it right is gathering a team of veterans and working with seasoned developers.

“We’re not making low-quality licensing stuff,” Heatherly said. “We are going to make quality games, first and foremost, that are additive to the franchise and become vehicles for creativity. We absolutely achieved that with the games we put out there with Jurassic World.”

For instance, Frontier Development was ideal since it had already made a series of Planet Coaster park simulation games and its engine was ready. It was able to make Jurassic World: Evolution for under $10 million, even with a team of just under 100 people. Heatherly said Frontier was a “jewel of a partner.”

“I feel like we’ve brought back film licenses,” said David Braben, CEO of Frontier, in an interview with GamesBeat. “We’re seeing Universal and Comcast looking at the future a lot. If you look at the figures on how important games are within the entertainment industry, $116 billion revenue last year — we’ve overtaken TV by quite a margin. They’re looking and thinking they want some of that.”

He added, “One of the things that was important — the quality of what we could produce would be very close to what the film could produce.”

So far, the collaboration has been good with the filmmakers, as the games do not have to follow a strict canon for the Jurassic World franchise. Hence, Jeff Goldblum’s character, Ian Malcolm, appears as a voice of caution in the Jurassic World: Evolution game, even though he’s not there in the film timeline. 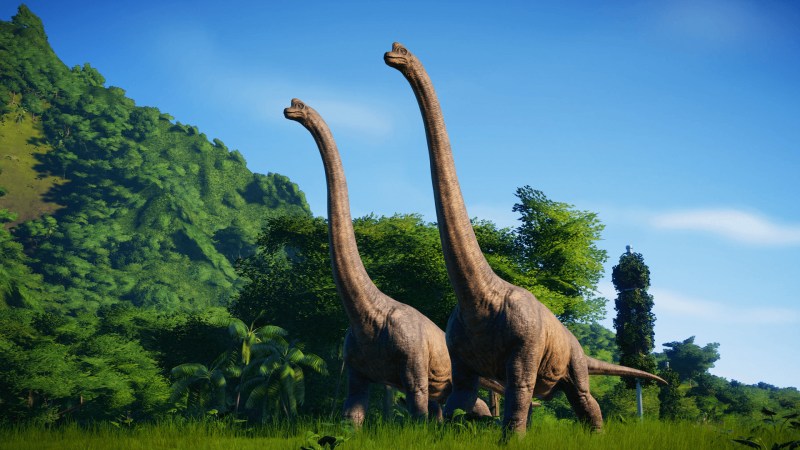 “There’s nothing in our games that contradicts the films, but we take creative liberties with the timeline and certain details to give the game makers the ability to make the right game,” said Heatherly. “We want to be true and authentic to fans and the filmmakers, but we don’t want to overly tie the hands of the game makers.”

Heatherly said that the creators of the films — like Steven Spielberg and Colin Trevorrow — are savvy about games. The Dave & Busters VR game had the help of Robert Stromberg of The Virtual Reality Company, one of the industry’s wizards on special effects. It turned out to be the largest launch of a location-based VR game to date, and it has had hundreds of thousands of session plays.

“Most poeple aren’t making movie games anymore,” he added. “I discussed that up front. We are not making games to promote the movie. They wind up having a promotional benefit. They amplify the whole franchise. Like the Batman Arkham games. They exist in their own universe.”

As for the mobile game, Montreal’s Ludia had already done a Jurassic World game in 2015. The new game incorporates Google Maps’ AR technology and more than 150 dinosaurs. That has helped Jurassic World: Alive hit more than 9 million downloads to date, and it is on the top-100 grossing games list on the app stores. 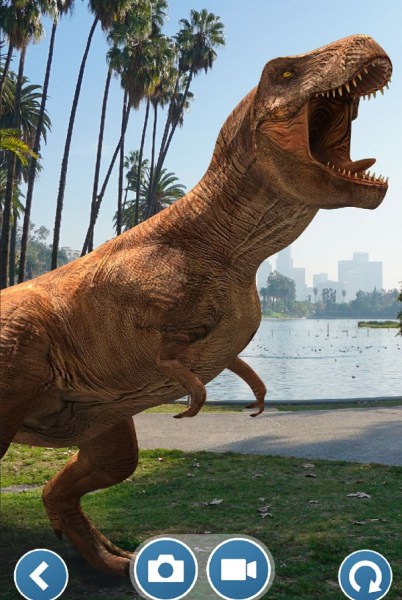 As for VR, Heatherly said, “One of the promises I made coming here is we are not just doing the safe stuff. We will keep a firm toe in innovation and looking to the future. If you are going to take platform risks, you are better off doing that with your major IP than things that are less well known.”

Jurassic World: Blue is a cinematic VR storytelling experience. And while VR in the home hasn’t been huge so far, Heatherly said, “It’s wrong to be too glum on VR in the home.”

As for the Alexa game, Heatherly said, “We are pleased with the response. Understanding the Alexa platform is important to us as people are becoming used to using them in their homes.”

Heatherly credits the team for the work they did in the past 18 months. 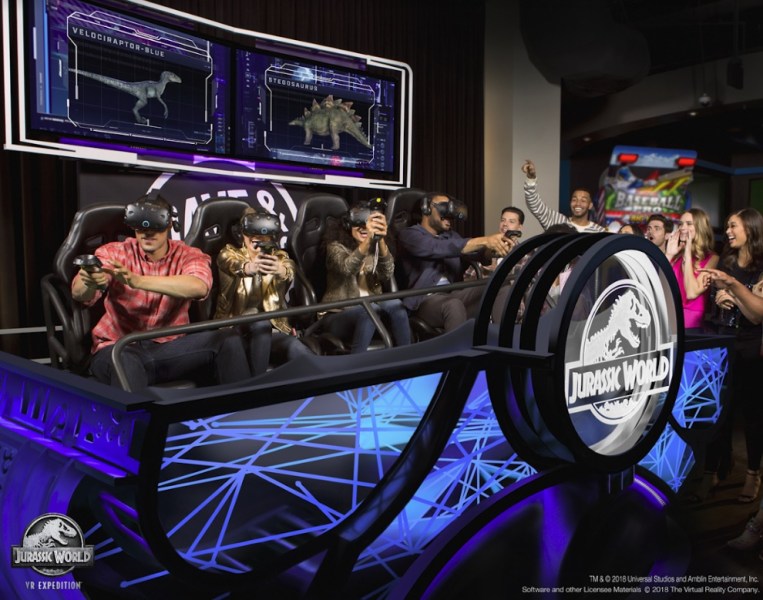 “Jim Molinets and Tim FitzRandolph respectively oversee product and creative,” Heatherly said. “They’re two of the strongest, most talented people I’ve worked with. But down to the producers that we had on these projects, these are people — if you’re going to trust your life to somebody, I completely trust those producers. We had hairy moments along the way, but between our partners and the talent we’ve been able to build up inside Universal, we were able to pull it off.”

And now it’s time to reload. One of the titles coming will be an indie-produced title that will come from the Universal Game Dev Challenge indie games contest, which I’m one of the judges for. There are six indie finalists, and the winner will get $250,000 and the chance to make a game based on one of Universal’s less-exposed film licenses, like Back to the Future or Turok.

“We’re always trying out new developers are working on concepts. Everything has to go through a greenlight process, but we’re always evolving that developer list,” Heatherly said.