Forceful trends of the game business could make the single-player triple-A game more of a rarity than a staple. Multiplayer-only games are delivering a lot of engagement and long-lasting fun for many gamers, and some of them don’t miss single-player campaigns at all. Three games that I’ve played recently are certainly reinforcing this trend.

Plants vs. Zombies: Garden Warfare and the previews I’ve seen of Titanfall and Evolve tell me that multiplayer-only games have a bright future. From a financial sense, these kinds of games are more efficient from a development cost and resource point of view. And triple-A console studios need a lot of financial help these days as players spread out across more platforms such as social and mobile. And as more players have access to broadband, multiplayer-only games aren’t locked into a narrow market made up of the most hardcore players.

Above: Titanfall for Xbox One and PC.

A very large percentage of Battlefield 3 players never tried the single-player campaign. They went straight to multiplayer and never went back. And when you think about the investment in the game, much of the work is dedicated to making a single-player campaign. Granted, if you shift all of the resources to multiplayer, you still have to build a lot of the same things. But the project is smaller and more manageable. If you go multiplayer-only, you may not lose a lot of players. And you can reduce the cost of the game and the size of the team. In an age where game studios have ballooned in size, this is an important tactic for staying in the triple-A production game.

A few major companies are recognizing this option as a better way to go. Respawn Entertainment took this approach with multiplayer-only with its highly anticipated Titanfall, a sci-fi mech-infantry combat game for the Xbox One (it’s a console exclusive), Xbox 360, and the PC. Titanfall took the top honors at last year’s E3 video game conference even though it didn’t have a single-player campaign. Respawn added some interesting story-like background into the cinematics, but it was able to stay small at around 60 employees by focusing on multiplayer.

For sure, Titanfall is an outlier that will make multiplayer-only games look a lot more attractive. I played the recent beta and had enormous fun with the Call of Duty-style fast-action first-person shooter, translated into a sci-fi setting with big mechs and lots of bots. The presence of the artificial intelligence-driven bot soldiers makes it easier to play. I could shoot a bunch of the bots in every session, even if I wasn’t particularly skilled enough to shoot other players. That made the game much more rewarding from my point of view, and that makes it more likely I will return to it a lot once it debuts on the Xbox One on March 11. 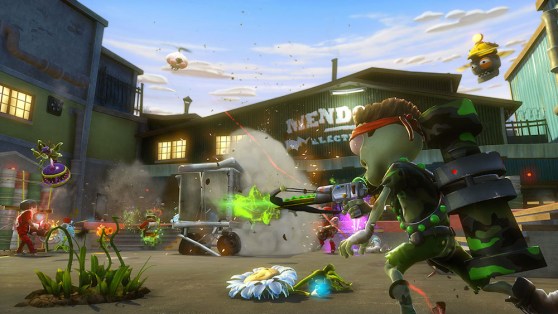 Above: With up to 24 players on each map, Plants vs. Zombies: Garden Warfare often feels over-the-top and frantic.

Electronic Arts’ PopCap Games division also took the multiplayer-only route with the just-launched Plants vs Zombies: Garden Warfare. I enjoyed playing this cute game where the zombies square off against plants in a first-person shooter. At the outset, each side has four different characters to choose from, with parallels to the usual multiplayer structure of assault, medic, engineer, and tank classes. The game has a lot of great touches with cute animations. The ZPG enables a zombie to launch a plant-killing rocket. The engineer is like a plumber zombie with loose pants and a big butt crack. I don’t miss a single-player story because, frankly, there wasn’t much of one in the original Plants vs. Zombies. I know enough of the backstory from playing both the original game and its sequel, Plants vs. Zombies 2. Both of those were fun, but Garden Warfare is just plain comic mayhem. It takes minutes to learn, and it’s a contained experience where the focus is on gameplay. I see it as a fun addition to the PvZ universe. Our reviewer didn’t like it, and I would just note that this cartoon-style shooter isn’t nearly as monumental as Titanfall or Evolve as creative achievements.

And Turtle Rock Studios took the same multiplayer-only approach with Evolve, a game that has been years in the making. The makers of the Left 4 Dead zombie-killing game knew that had something good with four human survivors fighting against hordes of zombies. It made for great four-player multiplayer sessions. But the zombies, while fast, could be classified as quite dumb.

With Evolve, four human players team up against one big boss, a giant monster. The twist is that someone else, not the A.I., plays the monster. Now the game is balanced, even with four against one. The monster is powerful and stealthy enough to take on the human hunters in a jungle-like setting. Plenty of animals and other beings in the world that make it realistic. But the fun is in how it pits human minds against each other. I thought it was a lot more fun than a single-player game, where it’s always easier to outwit the enemy A.I.

On the web and mobile, many game companies have already discovered how engaging multiplayer can be. In China, Crossfire from SmileGate and Tencent is a huge phenomenon, generating $957 million in free-to-play revenues during 2013, according to SuperData Research. That game is bigger than League of Legends, Dungeon Fighter Online, and World of Tanks. The common thread among these top four free-to-play games is that they are multiplayer-only online titles. Wargaming’s World of Tanks and World of Warplanes are both multiplayer-only, free-to-play games that are aimed squarely at people who would pay $60 for a triple-A game.

In mobile, Kabam’s The Hobbit: Kingdoms of Middle-earth and other titles in the Kingdoms of Camelot genre have been successful for a long time because 100-person clans hold the community together. The same goes for highly engaging and top-grossing games like Supercell’s Clash of Clans and Machine Zone’s Game of War: Fire Age.

Clearly, moving to multiplayer-only can reduce your risks. But if you get rid of the single-player campaign, you may lose the chance for your moonshot. My favorite games of 2013 — The Last of Us, BioShock Infinite, and Grand Theft Auto V — had some of the strongest single-player campaigns that I have ever played. The quality of their narrative experiences elevated them so that their impact was more meaningful than an artistically created film.

And certainly, some games is this realm have been disappointments. But triple-A multiplayer-only is one of the strongest trends of the modern gaming era. As a game maker, you can embrace it or ignore it at your own peril.