Everybody wants to see indie game developers succeed. The rags-to-riches fairy tale of the lone developer striking it rich is like a green light, a beacon that ignites the dreams of millions of aspiring game makers.

But the stagnation of the mobile game markets — where indies saw their best opportunities in the past few years — is creating a lot of angst about the future of indies. Game observer Anton Savchenko, predicted that there could be an “indiepocalypse” on Steam, the Valve-owned digital game distribution service, as the number of games being published accelerates to an unsustainable level. (I’ve added a poll for stating your own opinion at the bottom).

Sergey Galyonkin, publishing on data aggregator Steam Spy, said the median sales for games is falling. The flood of games has been enabled by technology such as game engines, which “democratize game development” in the words of game tool maker Unity Technologies. The app stores have made distribution into a self-service job. The barriers to entry have fallen. And Savchenko predicts that will lead to a crash that will take gaming into its dark ages. There’s some data on this, but I would love to see more accurate information on where indies are headed. 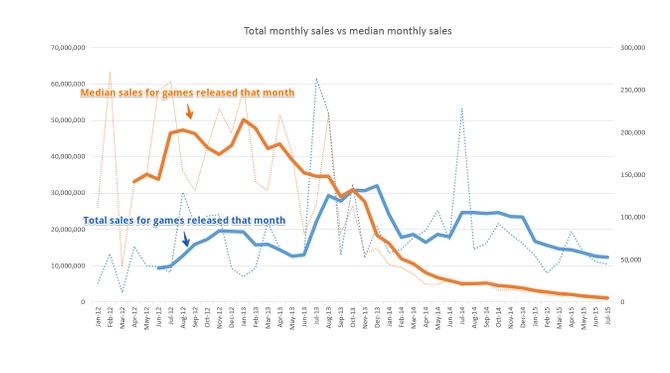 Above: Steam Spy data on median game sales on Steam and the total number released.

There are 1.6 million apps on iOS and a roughly equal number on Google Play. That means there are more than 3 million apps (with some duplication, and without counting apps on other platforms). We can assume there are somewhere around 2 million to 3 million indie game developers out there. Unity itself says its engine has been downloaded 2 million times. Market researchers estimate that mobile gaming has become a $30 billion global business. If you divide that revenue by the number of developers (say 2 million), you get around $15,000 per developer per year. If the number is 3 million, you get $10,000. That’s not a living wage in most parts of the developed world.

And, in fact, indie game developers made about $11,812 on average in 2013, the most recent year available, according to Gamasutra, a game developer publication. A new survey by the International Game Developers Association found that 37 percent of freelance developers make less than $15,000 a year.

Those developers are capable of building and launching games all by themselves, thanks to the self-service app stores. But that’s part of the problem. Most apps aren’t getting traction in the app stores, and the stores are so inundated with apps that it’s hard to find the good ones. Part of the problem is that 51 percent of developers say they’re making games for mobile platforms, which are overcrowded. 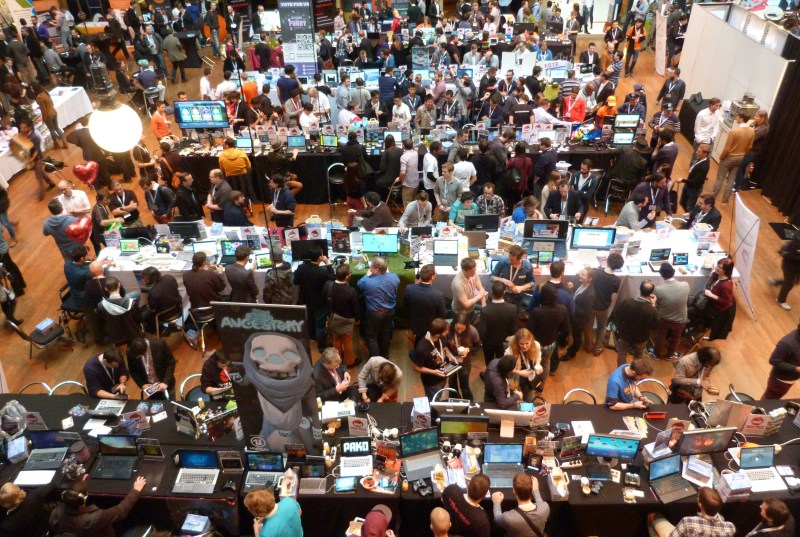 Above: The indie games section at Casual Connect was always buzzing with activity.

All of this data pretty much shows that the indies have clustered in mobile, and the life of an indie is hard. You can strike it rich, but the odds are increasingly against you. Making games for the PC via Steam isn’t a happy life, on average, as well.

And now the triple-A companies are driving hard into mobile.

Kabam, citing App Annie figures, pointed out the growing consolidation of the mobile gaming business for its decision to focus on making top-ten games. Kent Wakeford, chief operating officer of Kabam, said back in April that industry charts show that the top game in the app stores, Supercell’s Clash of Clans, is making $80 million a month, up 1,900 percent from $4 million a month for the No. 1 game in 2012. By comparison, the No. 100 game in 2015 makes $1.2 million a month, up 285 percent from $311,000 a month for the No. 100 game in 2012. As a result, Kabam, with 800 employees, can’t afford to make games that target a top 100 ranking anymore. It has to target the top ten.

A few dominant companies emerged — Supercell with Clash of Clans, Machine Zone with Game of War: Fire Age, and King with Candy Crush Saga. Their dominance of the top three-grossing games list made it very hard for others to compete. This trio spent so much on user acquisition that they drove the advertising costs up, forcing others to go big or go home when it came to marketing their games. Everyone is chasing them, but so far no one has knocked them out.

And that means that there could be an indiepocalypse coming.

Morgan Jaffit, an indie developer at Defiant Development, holds out hope that a “Triple-I” indie game movement could grow, where numerous high-end indie game companies can thrive. He acknowledges that there is a storm coming. But he thinks the surviving indies will come out very strong.

In an email, Jaffit said he has gotten good feedback on his own theory.

“A lot of people take issue with the term ‘Triple-I’ but I think just about everyone understands that it’s a growing part of the development reality that needs some term to describe it.  On the actual facts of the market trends, I don’t think anyone has really quibbled, with the exception of a couple of indie developers who desperately want things to be the same as they were in 2012,” he said. “It’s interesting, actually, as the shift has happened very quickly. I’ve had a lot of people who’ve released games in the last 6 months reach out to thank me for putting it all down, especially in terms of describing the broader patterns.” 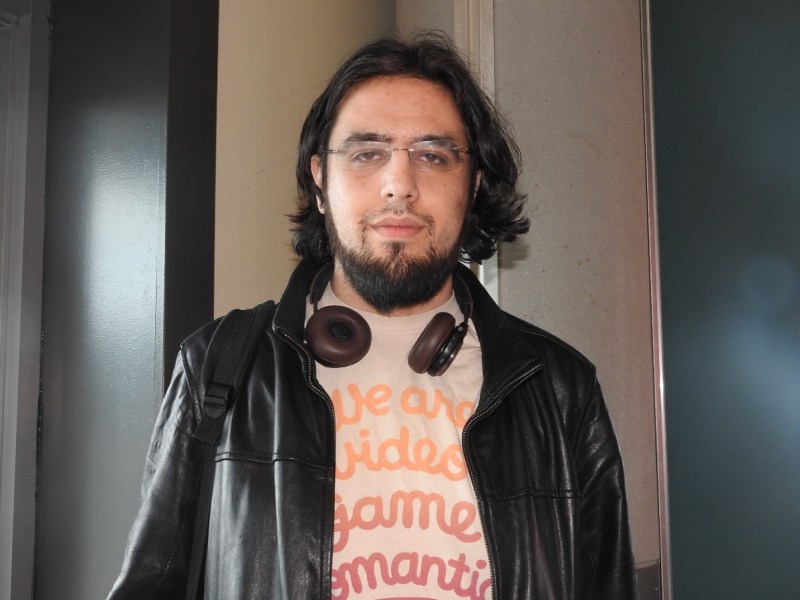 Above: Rami Ismail of Vlambeer, an indie game maker of titles like Nuclear Throne.

Rami Ismail, cofounder of Vlambeer, maker of games like Nuclear Throne and a frequent speaker on the indie movement, doesn’t believe in the complete boom or complete bust theories. I interviewed him at the IGDA Leadership Summit.

“I think both of those are incorrect,” he said, referring to the Indiepocalypse and the Triple-I boom. “We used to have a niche of mid-budget games. You had a Wipeout, a cheap knock-off, and an indie version someone made in their bedroom. The middle fell away. Indie became really good at being indie. And triple-A became too expensive to compete with. The entire segment’s ground caved away from underneath it. What happened is those niches never disappeared, and the indie audience has been growing. But the number of games has been growing rapidly as well. It might be at the point where there is too much stuff. On the triple-A side, there’s not enough games, because it’s so risky and the finances are up. The middle niche — double-A or triple indie — was under-served because the entire market dropped out. I don’t think anything will implode. But it’s harder to get started.”

Tim Sweeney, chief executive of Epic Games, the maker of the Unreal game engine for game developers, has also thought about this problem a lot.

In an interview earlier this year, Sweeney told me, “There are 2 million people in indie games shipping 250,000 games in the app stores every year. If you are not in the top 500, you are not making a living from it. That’s a very dire situation in the indie community. There are very talented developers out there. Instead of seeing everybody compete against the top 10 games made by massive companies with huge marketing budgets, I would like to see a hundred different genres with robust indie and mod communities around every one of them. That’s a much more plausible long-term direction for the indie community than the industry’s infatuation with the top-10 charts.”