Correction 2:58 p.m. Pacific: Microsoft and Sony were indeed at ChinaJoy, with a more muted presence in the last of the expo halls. –Ed.

SHANGHAI — As I walked through the vast exhibition halls at ChinaJoy this week, taking in one of the biggest trade shows in the world, it occurred to me that the basic strategy for the Chinese market — for Western game companies trying to break in and for Chinese companies trying to go beyond the Great Wall to the global market — is to go big or go home.

Everything here is big. China is home to Tencent, now the biggest game company in the world. And, from a sheer physical point of view, the Shanghai New International Expo Centre had ten of the biggest buildings I’ve ever seen dedicated to the exhibition halls for ChinaJoy. Seven other buildings were unused, providing room for much more expansion in the future.

But this year, it was clear that some of the game companies are indeed going home. A number of company executives told me they were concerned about the decline of China’s stock market, which has handily cut the market value of many companies, including the publicly traded game companies.

That suggests a troubling worst-case scenario for gaming. China is the world’s largest game market now, according to market researcher Newzoo. And the market is growing faster here than in many other big regions of the world. But if the big companies are sufficiently spooked by the market correction, they’ll be less willing to throw their cash around. That means they may make fewer acquisitions and pay lower prices. And they will make fewer investments in Western game companies. Already, in the first half, global game acquisition values were down 89 percent, and game investments were down 45 percent compared to a year ago, according to Digi-Capital, a market advisor.

In this scenario, if China sneezes, the world catches a cold. If the Chinese game companies decide to go home, and stay in the domestic market, they won’t invest as much in the rest of the world and game startups worldwide could be starved for cash.

There’s a feel-good version of the future that suggests the opposite could happen. Han Zhihai, CEO of Howell International Expo Fair and organizer of ChinaJoy, said that in tougher times, consumers may stay inside more and shop less. That means they might play more games, and game companies could prosper in the slowdown.

And as much as I noticed companies that were less aggressive, I also found huge Chinese companies that I had never heard about– companies with more than 1,000 employees, but with no presence in the West. They are eager to use their success in China as a springboard for the international market. 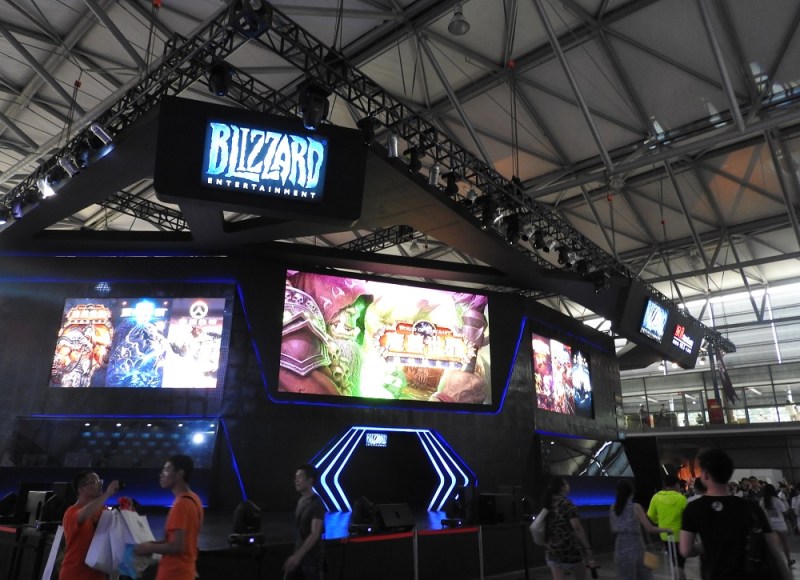 Above: Blizzard at ChinaJoy.

China’s regulator for games, Song Jianxin, said in his speech that the government wants the Chinese game makers to expand overseas and take Chinese culture across the globe. That’s a big ambition, but the Chinese game companies that I spoke with are all furiously looking for Western developers that can help them raise their quality and go worldwide. They should, of course, do this for the right reasons. They shouldn’t flee excessive competition in China just to run into excessive competition in the rest of the world.

There were some vast empty spaces inside the middle of the exhibition halls, marking spots where companies had disappeared. Noticeably absent were Sony and Microsoft, the console game makers who had huge booths last year (Note: Microsoft was at ChinaJoy). They still say they’re committed to the market and they’re excited about the Chinese government’s decision to allow console sales to spread across the country, but their lack of presence spoke volumes.

Xiaofeng Zeng, analyst at Niko Partners, said in an interview with GamesBeat that the console makers have had disappointing sales so far, and they may sell no more than 550,000 units combined this year. Phil Spencer, head of Xbox, said in his talk here that Microsoft is prepared for a slow growth market, but it remains committed. Zeng believes the console pricing is low enough to be attractive to Chinese consumers, but the real problem is the lack of games. If hit games, tailored for the Chinese market, don’t show up, then the console makers ought to head home.

“It’s below their expectations,” Zeng said.

In the middle of the vast empty spaces, it was clear who was winning. Mobile gaming and PC gaming companies had some huge booths. They also had plenty of showgirls, or “booth babes” as they are known in the West. They were less scantily attired than in past years, due to new restrictions by the show organizers. But they remained a uniquely Chinese symbol of coolness and prosperity aimed squarely at the abundant male gamers with long-lens cameras.

With a show this big, there were a lot of people who felt they had to attend. In the lobby of the nearby Kerry Hotel, deal makers were plentiful, from both East and West. ChinaJoy itself estimates that the 50,000 trade visitors will book deals worth an estimated $350 million this year.

Zeng said that among the measurable new entrants were all of the Chinese companies that showed up with hardware, or the “over-the-top” set-top boxes that are capable of playing games based on the Android operating system. That market could be a tough one as well, but it may also provide even more competition for the consoles in China. 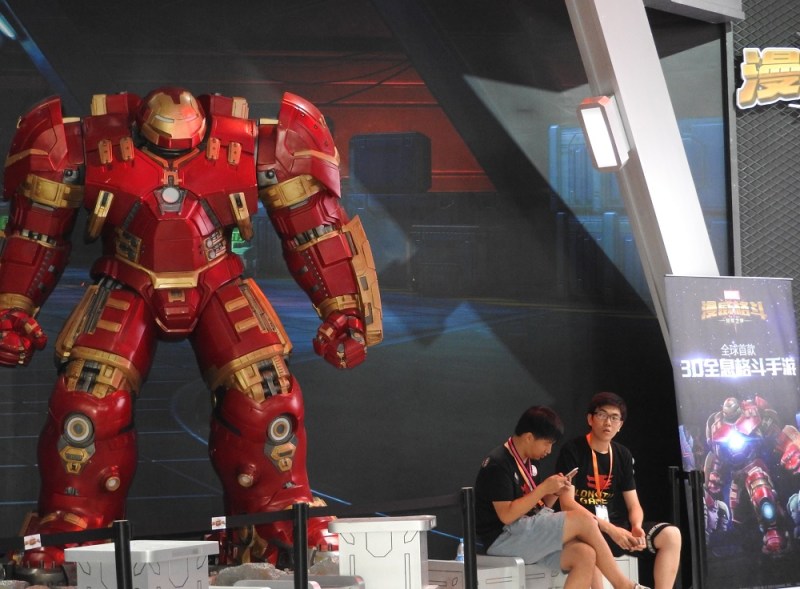 Above: Marvel: Contest of Champions character at Longtu’s booth at ChinaJoy.

And while I’ve talked a lot about Chinese companies going big into the global market, Western companies are also eager to go big in the Chinese market.

One of the companies that wants to go big is Kabam, the San Francisco-based mobile game maker that is launching its Marvel: Contest of Champions fighting game in China. Kevin Chou, chief executive of Kabam, explained to me what it means to go big, as the company is preparing to launch just four mobile games this year, compared to 16 last year.

The company is “hyper localizing” its Marvel: Contest of Champions mobile game for the Chinese market, meaning it is using a local development team in Beijing to make significant modifications to the game. The free-to-play game has already generated $100 million in revenue in seven months, but Kabam is taking great pains to take it into China in the right way.

One example: the Chinese Marvel game will have a more elaborate VIP system in China that rewards players who want to “pay to win” in China. That’s a no-no in the West, where players hate the idea that players who pay a lot of money can win. But in China, it’s the norm, Chou said.

Kabam has partnered with Marvel on the license. But Chou also took an investment from China’s Alibaba, and partnered with Chinese game publisher Longtu, as well. The reason for having so many partners isn’t obvious at first.

But Kabam’s main channels for spreading awareness of its games in the West are Facebook, Google, and Twitter. None of those are available in the East. Longtu and Alibaba have ways to reach a lot more gamers in China, and that’s critical to success, Chou said.

That means that Kabam will have to split its revenue up among more partners. But Chou said that growing the whole pie bigger for everyone will pay off. Sharing the revenue on a top ten game is a lot more economically attractive for a group of partners than sitting on a lesser revenue source alone.

All of this tells me that Kabam is playing to win in the Chinese market. If you aren’t coming up with this same kind of strategy, then you’re bringing a knife to a gun fight. Go big or go home.