That could do more to promote the cause of virtual reality — and an alternative game platform — than just about anything the Irvine, Calif.-based company has done before. For months now, tiny Oculus VR and its Oculus Rift virtual reality goggles — which make you feel like you’re immersed inside a virtual game world — have looked pretty puny beside the likes of Sony and Microsoft.

I think it’s safe to say that the underdog doesn’t look so weak anymore. If I seem a little excited, I can’t apologize for that. When an underdog with a good idea gets a big pile of money to turn that idea into a reality, then that helps everyone, including the industry that it disrupts, by introducing competitive forces where there weren’t enough before. Like Oculus VR, Valve’s effort to build alternative living room game machines, dubbed SteamMachines, also haven’t been taken that seriously yet.

If you’re Microsoft or Sony right now, it would be a good time to think about innovation. Sony’s chief executive, Kaz Hirai, is giving a keynote speech at the 2014 International CES trade show coming up in January in Las Vegas. That’s a very prominent podium that he could use to brag about the rapid adoption of the PlayStation 4, which sold more than 2 million units in its first 18 days. Microsoft has essentially matched that launch, but you can thank the likes of contract manufacturers in China for the efficiencies that made such numbers happen. 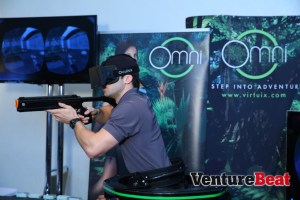 But Valve is due to ship development versions of its own innovative Steam Machine game controllers to game developers today. And Valve’s partners like Digital Storm have already said that they will show off new Steam Machines at CES. Hirai is going to have to produce some pretty good news of his own to steal the thunder away from Valve.

The Steam Machines are an alternative platform because they are taking the PC where Microsoft hasn’t — into the living room in a more open platform. Valve is using Linux as the core of a new operating system that will run Valve’s PC-based library of Steam games. While Microsoft is moving toward eliminating rival stores on its Windows platform, Valve will still be able to deliver games to its 65 million Steam users via the Steam Machines, which partners will build. And Valve has created a novel controller that enables PC games to be played via a console-like controller for games in the living room.

That’s a lot of innovation that Valve has been forced to do because it hasn’t gotten along with Microsoft. Microsoft would do well to worry about the effect of losing Valve’s gamers to the SteamOS-based Steam Machines.

Oculus could certainly work with the Steam Machines as well as the PC. But John Carmack, the newly appointed chief technology officer of Oculus VR who is best known for making Doom and Quake, is hard at work on extending the Oculus VR goggles to mobile platforms as well. If you put those goggles together with Sixense’s gesture-based controllers, you could create unique experiences like the feeling of climbing a ladder inside a game world.

The problem for Oculus VR and Valve is that they need to build a whole new ecosystem in order to win gamers and game developers to their causes. With lots of money, Oculus can get over the chicken-and-egg problem, where it can win over developers because they don’t believe it has the financial clout to bring its platform to the market in a meaningful way.

But it takes a lot more money to actually launch a console. Maybe a billion dollars. Oculus and Valve need a lot more help in order to be in a position to take on the incumbents. But there are a lot of disenfranchised giants out there. AMD is making chips for both Microsoft and Sony. But available partners include Intel, Nvidia (already a Valve partner on the Shield handheld), and bunch of PC makers.

Valve is also strong in its own right. It has just a few hundred people. But it has wisely decided not to make its own hardware. It is finding partners to do that. And it is printing money with Steam, which has 65 million users who are buying PC games. And it makes its own exclusive games like Left4Dead and Half-Life. It really isn’t all that puny, and that’s why it can innovate and push forward an alternative platform on its own.

I’ve already gone on the record to say I’m a bit bored with the new game consoles already, just a few weeks after they’ve shipped. Microsoft and Sony can’t afford this kind of attitude to spread unchecked. They can address it by innovating on top of the superb graphics platforms that they have already launched. In fact, I’m confident they can do so as they use the cloud to enhance the experience of the home consoles.

Sony has announced that it will do just that in 2014 with the launch of new digital services based on the Gaikai technology it acquired. Microsoft has also promised that cloud processing, or using hardware in web-connected data centers, will enhance your home gaming experience. I’d like to see more of this. I’m impatient. I’d also like to see Nintendo do something new, rather than just ride on the brand value it has created with Mario over the past few decades. The good thing for the incumbents is that we still have no idea when Oculus VR and Valve will get to the market.

But you can bet with an enemy like Andreessen starting them down, Sony, Nintendo, and Microsoft are going to be plenty worried about the puny little rivals now.