Zynga’s new strategy from chief executive Don Mattrick shows that the future of games is mobile. Zynga paid $527 million for mobile game maker NaturalMotion. And Mattrick said that 75 percent of all new games are now debuting on mobile first.

My lesson from this big transaction is that there is a growing divide between the people who make it look so easy to make successful mobile games and the people who find it incredibly hard to replicate success. Zynga has been in the latter group, and it desperately wants to graduate to the former, as mobile is the fastest growing game market at $13.2 billion worldwide, according to Gartner.

Some may say that Zynga paid too much for NaturalMotion. Adam Krejcik, analyst at Eilers Research, said that Zynga paid seven times forward-looking sales. The stock market liked the deal, adding more than $500 million in market value to Zynga’s stock.

“Most of the deals we’ve been seeing in the social mobile space have been done at a three times to five times sales multiple,” Krejcik said.

Mattrick is willing to pay a higher price to boost his poker hand. His plan is to “enhance our capabilities to create new hits,” or efficiently build a portfolio of games, proven game studios, and proven game leaders that will make it much more likely that Zynga will succeed in the transition from social to mobile games. He wants 2014 to be a “landmark year” for Zynga in mobile games, based on his comments in an analyst conference call yesterday.

Luckily, Zynga has the cash to try. Zynga founder Mark Pincus had a lot of critics when he took the company public in the fall of 2011. But time has shown that raising a $1 billion when the company was hot (when it was valued at $9 billion, compared to $2.8 billion now) showed a lot of foresight. Even after spending $391 million in cash (plus 39 million shares) on NaturalMotion, Zynga still has a war chest of $1.2 billion. Zynga is now using that money it socked away for rainy days.

That cash cushion is growing again and it can cover a lot of mistakes, like the $180 million that Zynga spent on OMGPOP in order to get its hands on Draw Something. Zynga wound up shutting down OMGPOP in August. That mistake was widely criticized, but it was worth a try.

The question is whether Zynga has finally bottomed out. Billy Pidgeon, a longtime game analyst, says that it looks like “there is nowhere to go but up.” But he notes Zynga still has a long way to go to get back to its heyday. The number of users who played a Zynga game in the past month is at 112 million, well below the peak in the third quarter of 2012 at 311 million. Zynga has also lost a lot of talent in the past year and a half through “flight and the layoff knife,” Pidgeon said.

If Zynga had one or two big mobile hits, it could make a difference. Mattrick said that a top 20 hit on mobile and the web can generate $100 million to $300 million in bookings per year. A game that can sustain itself on the top of the charts can generate more than $1 billion a year. So the line between hell and paradise is a thin one. Just one great game could double Zynga’s revenues.

David Cole, analyst at DFC Intelligence, said he has “bashed Zynga for years,” but he has actually put them on the companies to watch in 2014, mainly because products like the mid-core game (hardcore in nature but snack-like in play time) Solstice Arena show that the company is moving toward high-quality releases.

If you look at the investment side of things, the guy who is making it look easy among venture capitalists is Mitch Lasky, general partner at Benchmark Capital and an investor in gaming startups such as Riot Games, Gaikai, and NaturalMotion. His investments in game companies have produced more than $2 billion in exits, which is an unparalleled record.

“Mitch Lasky and Benchmark are certainly winners in this deal,” Krejcik said.

The fact that Zynga has to pay so much to people like Lasky suggests it is incredibly hard to make successful mobile games. Zynga had invested in thousands of game developers who were trying to produce internal hits, but it was also willing to spend money on game studios on the outside. 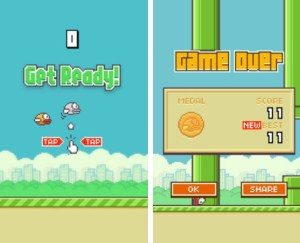 Yet others make it look so easy. Dong Nguyen, a lone developer at dotGears Studio in Hanoi, Vietnam, has a silly but difficult game called Flappy Bird at No. 1 among free titles in both the Apple iTunes App Store and Google Play store now. Does that mean his game studio is worth more than $527 million? He makes it look simple.

So does Supercell, with just 130 employees. It makes more money in mobile games than Zynga with just two games, Clash of Clans and Hay Day. By comparison, Electronic Arts has more than 900 mobile games, none of them able to knock Clash of Clans out of the top rank in top grossing apps on iOS.

And NaturalMotion took a console-like racing game and made it work on mobile. CSR Racing was a big part of the reason why Natural Motion had ongoing sales, and it was a reason why the company commanded such a high price.

It also launched Clumsy Ninja, a game with a funny character with human-like responses to touchscreen inputs. Clive Downie, chief operating officer at Zynga, told me in an interview yesterday that Zynga and Natural Motion’s plans for what comes after Clumsy Ninja is a “delightful secret.”

If Natural Motion has something waiting in the wings, Zynga’s recovery could be much quicker, Pidgeon said.

Of course, Torsten Reil, chief executive of NaturalMotion, would hardly say that his company’s journey has been easy. He invested in the artificial intelligence and realistic motion behind Clumsy Ninja for more than a decade before finally launching the game last fall. Reil could take his money and run. But he’ll make a lot more money with his new Zynga shares if he stays and makes Zynga successful.

The important thing is that, with NaturalMotion, Zynga will have a lot more chances to launch successful mobile titles from studios and leaders that have been very successful at it in the past.

“We have a good number of shots on goal coming,” Downie said.

After this big bet, we’ll see if Zynga has done enough to escape purgatory.