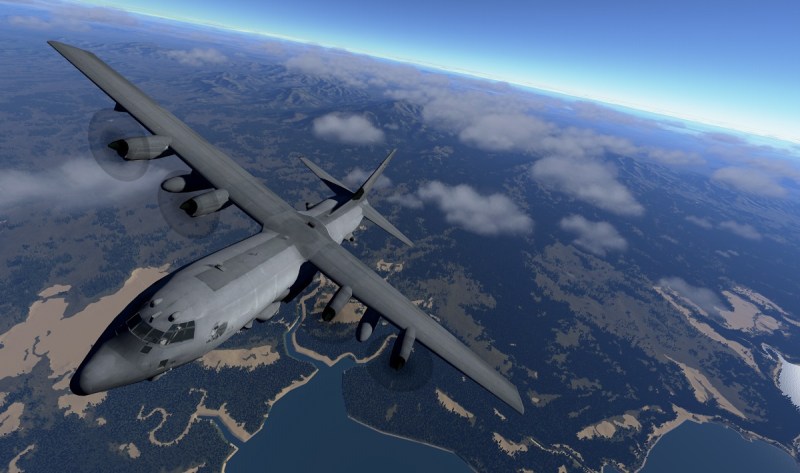 GamesBeat: It seems like there are some very different conclusions you could draw. In some ways, the realistic military simulations like Arma are a good thing to have, but something like, I don’t know, Saving Private Ryan can be a good thing as well.

Barron: I think the truth is a good thing to have. You can’t go wrong with doing good research about what actually happens and trying to represent it as accurately as possible. Whether it’s a movie like Saving Private Ryan or a VR experience about Hiroshima or a game like This War of Mine. There are all different views, and maybe they have different slants, but it doesn’t hurt anybody to look at things the way they are, even if it’s only a part of it. There’s nothing wrong with having different perspectives. That’s what games can do. They can provide different perspectives.

GamesBeat: Do you think about how to apply some of this high-level thinking you have about war to particular [kinds] of games that you might want to work on in the future?

Barron: I have my side interests. I like board games. I’ve been working on a board game that’s a kind of cross between a hack-and-slash dungeon crawl and an Afghanistan-set war game. I think I talked about this in my talk. War is more like an RPG. I think it would be an interesting way to approach and experience this, whether in a board game or a video game. Take more cues from the way RPGs work — the way they tell stories and let you interact with the game world — and apply that to a more action-oriented, more modern warfare-oriented context. I think that would be interesting to see.

GamesBeat: Are there memorable moments that you remember from games and their treatment of war, things you still think about?

Barron: Operation Flashpoint, obviously. That game changed my life. I wouldn’t be here in Prague talking to you if it weren’t for that game. In many ways, it’s had a huge impact on my life. Before I started doing anything professionally, it was because the game itself wrapped me up. I remember playing the demo in 2000, 2001, where you gathered a squad of AI soldiers and went up a hill and there’s an enemy BMP that you shoot with a rocket. You’re in this huge world, and stuff is going on everywhere. It was just mind-blowing, that it could be done in a video game.

I remember a sequence with a truck. I shot the truck driver, and then, I was able to get in the truck and drive it. I just drove it around the world until it ran out of gas, hours of wandering around this giant terrain. That really opened my imagination as far as what you could do in video games with war as a setting. That’s when I really got into modding. I had all of these things I wanted to do, all of these gameplay elements I wanted to explore, levels I wanted to make. That game consumed my life for years. Then, I got hired at Bohemia, and it’s consumed my life ever since. That’s the most memorable.

Above: Turning signals on convoy vehicles are critical in proper simulations, but game devs might overlook them.

GamesBeat: When you’re working at Bohemia, is there an interesting dynamic between you as a veteran and younger people who’ve always been software developers?

Barron: There’s an interesting cultural dynamic in general, America versus Europe in general, but especially the Czech Republic. America is very patriotic, let’s say, very support-the-troops, very thank-you-for-your-service. Over here, it’s not seen in the same light. It’s not that people dislike it, but it’s not held in as high of esteem over here, the concept of the military. In the U.S., it’s one of the institutions that’s held in the highest esteem compared to anything, but over here, it’s not so much up there.

In general, there are not a lot of veterans in games, in development. Even in the simulations industry, on the development side there are very few veterans. I don’t hide, but I’m not walking around trying to advertise it everywhere I go. When it comes in handy, and it does quite often, I’ll use my experience to explain. We’re doing military simulations, so obviously, there are many times where we’re working on some features, and I’m able to explain it to the developers in a way that makes sense. “This is what this will be used for. This is how it works in real life. This is the implication.” That’s more useful, that ability to explain things in a developer’s terms. This is what this means to you as a developer, how this impacts your work. I think that’s where I bring value to this company specifically or one of the ways I bring value.

GamesBeat: In some way, your job seems consistent with the message you want to get out there. You’re at a company that does realistic games.

Barron: I hope so. I hope that gives me some credibility. All I do all day is make video games that are used to train soldiers to go to war, and now, I’m on the simulation side. It’s actually two separate companies. The simulations company, we take the game engine and do that, and then, there’s a separate company that takes the engine to make commercial games. But they have a similar philosophy of making them as real as possible. It’s about showing things the way they really are.

When I talk to military customers, it’s a completely different conversation than talking with civilians. We’re talking about real things that they need to prepare for in different kinds of military operations. On the game side, it’s so far removed from that conversation. 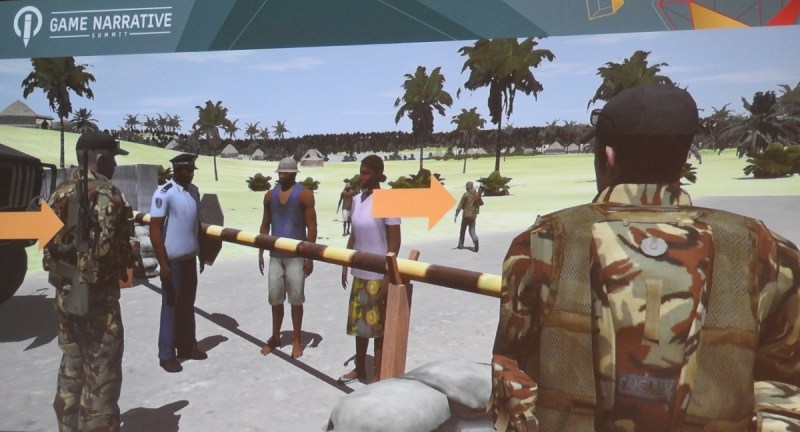 Above: Are there any threats within view?

GamesBeat: In some ways it almost seems like, in those simulations, you need the boring parts because that’s the way it is. When you’re surprised by something you can be legitimately surprised.

Barron: The way that the military uses simulations, it’s interesting. It’s more like a role-playing game. You have an instructor, and he has a sort of god mode. He’s almost acting like the dungeon master in a pen-and-paper RPG. He’s watching from a bird’s-eye-view camera. He has a special interface. He watches what the trainees are doing, and in real time, he makes something happen. A bomb just exploded next to you. What do you do? He can take his mouse, place an IED, make it go off, and then watches what the trainees do.

One of the differences between games and simulations is the simulations don’t have levels. All the levels are created by the instructor, so every training event is a new level. The trainer acts as a game master running the level in real time, so it can be adjusted according to what the trainees are doing. That’s not a game mode you usually see in video games, although Arma has the Zeus DLC, which is pretty much just that.

GamesBeat: Based on the experience of giving the talk and the feedback you’ve gotten, what would you say is your conclusion? What do you think you’ve learned from it?

Barron: I learned that writing is hard [laughs]. I was torn on whether to do a design talk or a narrative talk, but I’m glad I decided to do a narrative talk because I had to think of this from more of a narrative perspective. I have a new appreciation for how hard it is to write in a speech format. I can’t imagine a game format. It has to be a lot harder.

As far as my takeaway or my message, it’s that games can do more. Games can grow up. Game audiences — there’s room for mature themes and a bit more thinking and a bit more intriguing, deep narrative and deep gameplay. Games can do that. Games can learn a lot from the military and also from military simulations. We’re making games to train real-life soldiers. It’s not hard to take those techniques and apply them to video games.

I’d also say, this is something I didn’t talk about as much in my pitch, but I’ve encouraged more veterans to get involved in game development. That’s another way to get these voices out there. When we’re hiring, I always give bonus points to veterans, but there aren’t a lot out there that have development skills. Maybe some of them don’t know if there will be a cultural fit. But I’d say, please join us, and help us out.