Hearthstone: Heroes of Warcraft did something that few games have accomplished: help launch a new, $1.2 billion dollar “dominant category” in gaming.

But early reaction mocked it as a Hearthstone clone. After playing it at this year’s E3, it’s clear that while Blizzard’s money-maker serves as an inspiration, Legends stands on its own, bridging the lane-based combat of games like Stone Blade’s Ascension and SolForge with Hearthstone. 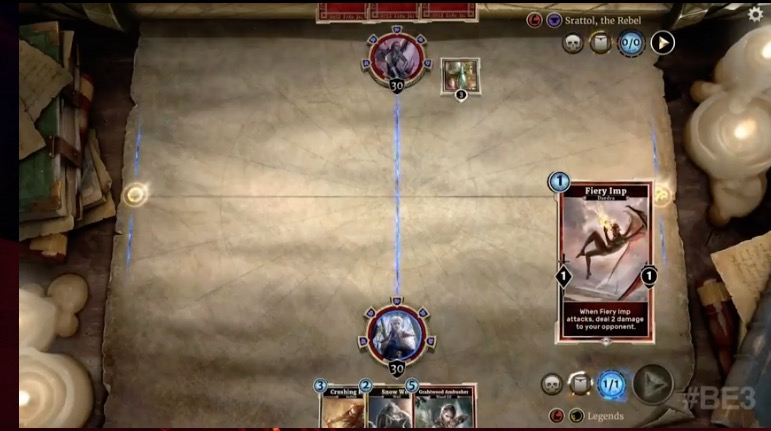 Legends shares characteristics with Hearthstone — your hero has 30 life, and their portrait sits in the middle of your side of the board. You play cards on a field in front of you, and you manipulate them in the same way, clicking your mouse on them and then your target, either your foes’ cards or their “face” (as players refer to the hero’s pictures in Blizzard’s game).

You have mana, though it’s a number and not crystals as in Blizzard’s game, and the way spells interact and the basic level of strategy seems like Bethesda pulled it straight from Hearthstone.

But it didn’t. And the difference is in the lanes.

The board not only has two sides but also has a pair of lanes. You can play your minion cards in either lane, and this is a key to Legends’ strategy — especially with cards that interact between the lanes. Let’s look at the Imperial Grunts. This is a card that floods your board with as many 1 Attack/1 Health (1/1) soldiers as can fit in your lane (up to four minions per lane). I lost one to an ensuing attack from my opponent (a live player in this show floor demo).

On my next turn, I played an Imperial Siege Engine, a 3/3 unit that receives a 1/1 buff for each allied minion on the board, in the next lane. And whamo! — I had a 7/7 foe in the other lane. The board was in my hands.

But any good card game provides cards that have answers to handle the situations your foes throw at you, and on my opponent’s next turn, he played a card with the Shackle mechanic in the lane with the grunts. This is a tactic you won’t find in Hearthstone.

The Graveyard is your discard pile, where cards that you get rid of or that are destroyed go. It’s another fantastic mechanic that rarely comes into play with Hearthstone (cards like the Whispers of the Old Gods legendary N’zoth and the Priest spell Resurrect are exceptions). It’s an important aspect of other games, like SolForge, and based on my time with Legends, it plays a significant role in the Elder Scrolls as well.

I saw how the Graveyard works with The Black Worm Necromancer, which returns a minion from the Graveyard when you plop it on the board — as long as you have more health than your foe. Crafty deck builders will see how powerful this card could be. If you have a minions on the board, you can bring back a unit like the Siege Engine to swing the match into your favor

Bethesda is widening the closed beta soon, and I hope to get a better look at Legends then. Right now, it’s clear to see that while it incorporates some of Hearthstone’s look and feel, the Elder Scrolls is also setting itself up to stand apart from Blizzard’s card-game leader.

And maybe carve a sizable portion of that market for its own.