Publishers love selling expensive special editions of their games because you love buying them.

The Elder Scrolls Online is a good example. At least one online retailer is finding that players are heavily favoring that upcoming massively multiplayer online title’s $80 Imperial Edition. Preorders for that version are about five times higher than they are for standard version of The Elder Scrolls Online.

The MMO role-playing game is due out April 4 for PC and Mac. It will follow in June for PlayStation 4 and Xbox One.

Dealzon, a deal-aggregation site (full disclosure: Dealzon is a GamesBeat sponsor), has informed GamesBeat that it has helped facilitate the sales of around 1,500 digital copies of The Elder Scrolls Online from Jan. 29 through Feb. 2. Of that total, more than 1,250 were the Imperial Edition while only 275 were the standard. That’s a 4.6-to-1 ratio.

Here’s an infographic that illustrates the difference in sales between the two versions of The Elder Scrolls Online through Dealzon: 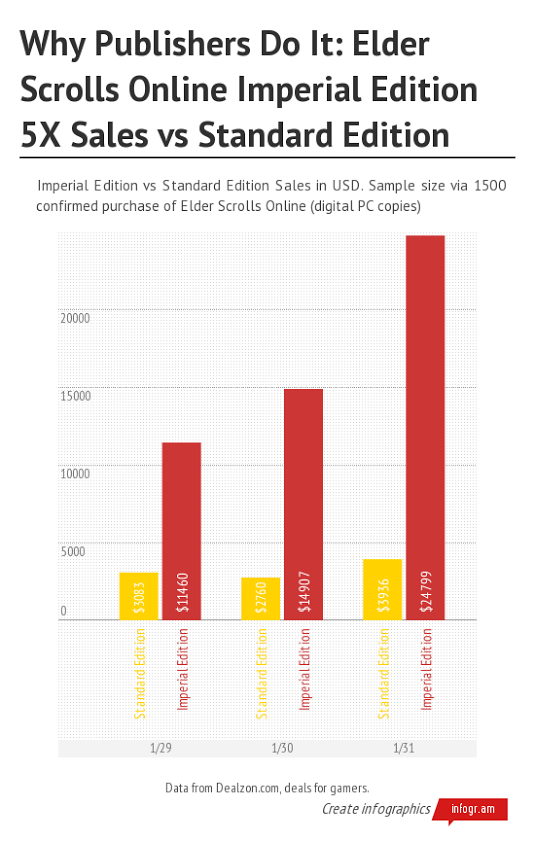 Above: The Elder Scrolls Online’s early sales through Dealzon.

We’ve reached out to The Elder Scrolls Online publisher Bethesda to see if this is a far-reaching trend. We’ll update this story with any new information.

Dealzon’s numbers only cover the digital PC copies. Bethesda is also selling standard and deluxe editions in physical forms for PC as well as Xbox One and PlayStation 4. It’s possible that those versions aren’t following the same trajectory as the digital PC releases.

As for the direct comparison of the digital Imperial Edition and the digital standard release for PC, the limited package is pulling in a lot more cash for Bethesda.