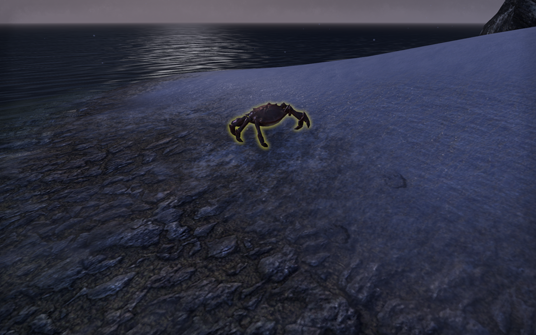 Above: It wouldn’t be an Elder Scrolls-ish game without Mudcrabs, would it?

Playing by the book

The first character I created was a Redguard, part of the Daggerfall Covenant, the first of three alliances in The Elder Scrolls Online that set the stage for the player-versus-player portion. I have never played The Elder Scrolls II: Daggerfall, which meant I had no context for the areas I was in, which might be why I was focused so intently on analyzing the core game design. 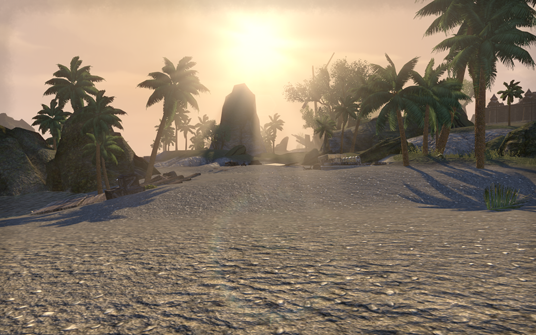 Above: A starting area for Bosmer (wood elves) and Khajiit (cat people).

The trappings of Tamriel

There were design elements in The Elder Scrolls Online that felt authentic to the Elder Scrolls games beyond the use of familiar races like Khajiit and Argonians, locations like Ayelid ruins and Nordic burial sites, familiar UI elements, or references to places and nations from the series:

All of these elements acting in concert were still not enough to distract from me from realizing at all times that I was playing yet another game that borrowed from the design pioneered by the original EverQuest and perfected by World of Warcraft, another game like Star Trek Online, Star Wars: The Old Republic, or The Secret World, which are the last three massively multiplayer online games I sank any concerted amount of time into. Above: Because books should not only be entertaining, but helpful!

The traditional MMO design is rooted in artificiality. Single-player role-playing games can afford to allow one person to make substantive changes to the game world, because a single-player RPG only has to keep track of that one player’s choices. Traditional MMOs have to present static environments in order to avoid the mother of all “too many cooks in the kitchen” scenarios. Star Wars: Galaxies continues to hold a special place in traditional MMO history because it not only gave players unprecedented leave to shape the game world and its contents to their liking, but it required them to do so for the world to have any semblance of life.

When a traditional massively multiplayer online game purports to draw its creative inspiration from a single player RPG series like The Elder Scrolls, which prides itself on the degree to which players can make the game worlds their own, that sets the stage for all sorts of cognitive dissonance. I couldn’t steal all of the plates and cups I saw or loot every body I found in The Elder Scrolls Online, and it bothered me. I lost any expectations of ever having a house with drawers and chests and boxes to store all my things in or ever having any meaningful relationships with nonplayer characters. I rolled my eyes at all of the NPCs with traditional “I have a quest for you!” icons floating over their heads. Between what clearly felt missing from the world, and what felt egregiously imposed upon it, The Elder Scrolls Online rapidly ceased to feel like a world at all.

When my Redguard progressed beyond two small areas clearly designed for lower-level characters, I arrived in the city of Daggerfall. Rather than take up any quests within the city, I headed out past the gates to see whether I had finally arrived at a place where I could wander the world like I would in any Elder Scrolls game. There was no abundance of undiscovered locations appearing on my compass, piquing my interest and inspiring me to explore them. No actual lines were drawn on the map to indicate which areas were appropriate for which levels, but the separations were clear by how quickly monsters killed me. I could only explore as long as I kept to the paths, or snuck past the increasingly higher level monsters the further away I got from the city. Any chance The Elder Scrolls Online had of convincing me that I ought to consider it an entry in the Elder Scrolls franchise died with that realization. Not being able to freely explore the environment regardless of level and not finding many places of interest in it are antithetical to what the Elder Scrolls series stands for. 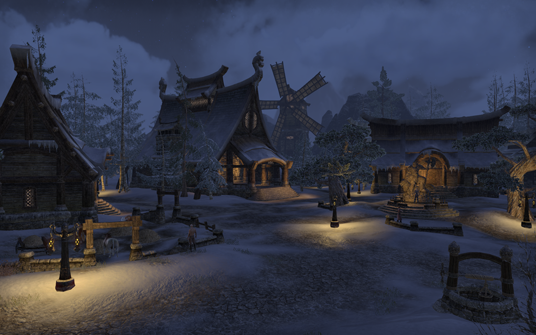 Above: Bleakrock Isle, off the coast of Skyrim.

Almost, but not quite

I created a second player, a Nord, in the hope I would see more familiar surroundings than I saw with my Redguard. The starting area for my Nord character was Bleakrock Isle, off the coast of Skyrim. I felt the appeal of the aesthetic trappings like familiar-looking buildings and Nord accents from vendors and NPCs. I solved puzzles using runes adorned with familiar Nord iconography, and I killed skeletons that made the familiar creaking sound that skeletons make in the Elder Scrolls games.

I designed armor and weapons for my character in the Nord style, and I fled the island in a ship that was clearly built by Nordic craftsman. Shortly after arriving in Morrowind, I was disconnected from the server. My time with the press beta had ended, and I was disappointed. I have never played Morrowind, but I recognized familiar elements from gameplay videos, and I wanted to explore. It felt like more excellent fan service, but identifying it as “fan service” made me feel the separation between The Elder Scrolls Online and proper Elder Scrolls games one last time.

The Elder Scrolls Online is homage, not a proper entry in the franchise. It is not another world in which we can live another life. It is another MMO. Set your expectations accordingly.