It’s no secret that esports, or competitive video gaming, has become big. The question is how big.

Colin Sebastian, analyst at R.W. Baird, estimates that esports will generate more than $1.8 billion in annual revenue by 2020, according to a research report dubbed “esports readying for prime time” released today. While esports is growing fast, Sebastian said it is still in its early stages and could be “the next big thing in media and entertainment.”

We’re interested in the numbers since esports will be prominent at our GamesBeat 2015 event next week. We’ll have panels on investments in esports (moderated by AIAS president Martin Rae), the growth of esports companies (moderated by GamesBeat’s Jeff Grubb), and the growth of the esports community (moderated by IGN’s Mitch Dyer). We’ll also have a fireside chat with Coca-Cola’s Matt Wolf and Twitch chief revenue officer Jonathan Simpson-Bint.

In 2014, esports was a $200 million industry. But the revenue is just starting to come from tournaments, advertising, sponsorship, broadcasting, betting, and fantasy esports. Competitive gaming drives Twitch, which has already begun to generate some huge numbers with more than 100 million monthly active users viewing gameplay livestreaming. It’s also making its way to ESPN and TBS.

“Importantly, we believe that our estimates could prove conservative; depending on how aggressively game developers build eSports features into popular video games,” Sebastian wrote. “Eventually, in our view, most new video games will offer some features of esports.”

Sebastian said that esports is still relatively unknown outside of video game circles. One gauge of the opportunity: esports venture funding over the past 18 months was $175 million.

Over time, he believes beneficiaries will be game publishers, hardware platforms, and online streaming sites. Not only does esports generate more retention in games, it also leads to better monetization. 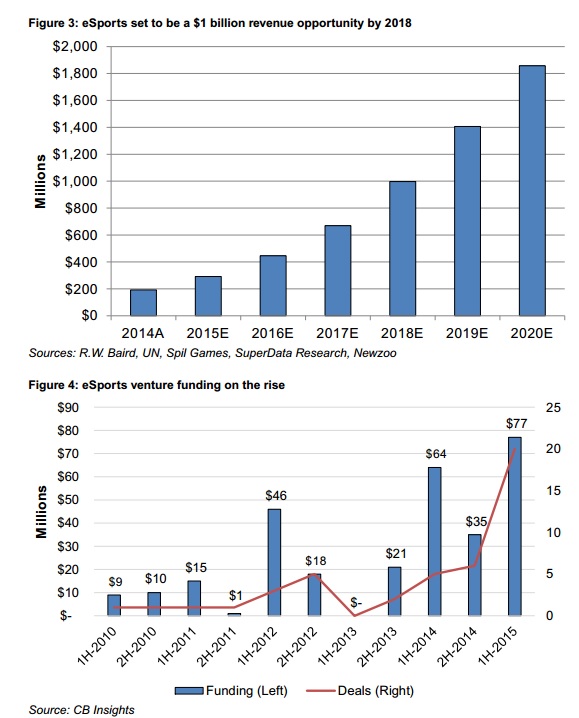