The Evil Within 2 is one of those games that is so horrifying I really don’t want to play it. It is over-the-top gruesome, and no parent should let their child play this mature-rated video game unless you want the kid scarred for life. The imagery is so violent and scary that I figure I’ll have nightmares if I try to play it all the way through.

But it’s so well done. Its creators use plenty of cliché tricks from the horror genre, like big butcher knives, bloody messages on walls, monsters that are assembled from human body parts, dimly lit mansions where you can’t see what’s in the dark corners, and jump scares aplenty. Oddly enough, all of that adds up to an immersive horror experience. I can’t look away. 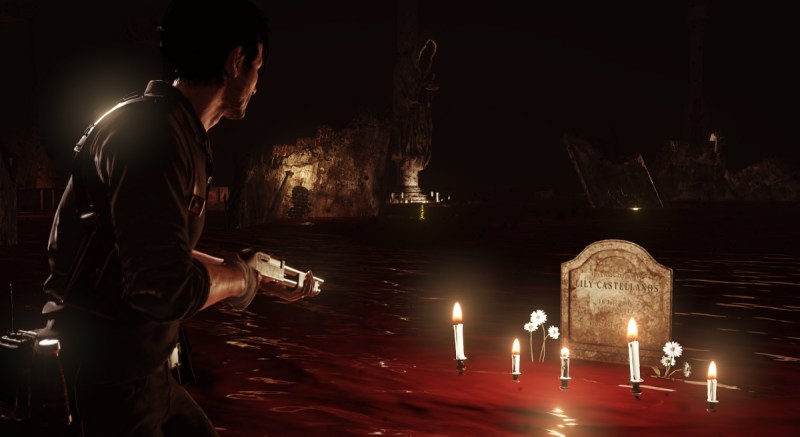 Above: The Evil Within 2 has a way of making you scared before the really scary stuff happens.

Editor’s note: This story and its videos have story spoilers.

The survival-horror game comes from Tango Gameworks and is directed by horror veterans John Johanas and Shinji Mikami. The latter is best known as the creator of the Resident Evil series at Capcom. Mikami directed the original The Evil Within, which debuted in 2014. The Evil Within 2 debuts on the PlayStation 4, Xbox One, and PC on October 13 (a Friday, naturally).

The video at the top takes place at the start of chapter five. A helper from publisher Bethesda suggested that I learn how to shoot, level up my capabilities, and stock up on weapons and ammo. Then I went fresh into the trap, where an ungodly beast awaited me. You play as Sebastian Castellanos, a detective who was fired by the police department because nobody believed him the first time around. He’s looking for his daughter, Lily, who was thought to be dead but has really been kidnapped.

Sebastian goes into a big fenced garden that surrounds a spooky mansion. There are bodies everywhere. He approaches the front door, and then the bodies assemble themselves into a monster. Thrown into the trap, with no way out of the garden, I had to use all my weapons to get away from the thing. It had the laugh of a crazy woman and was armed with a giant circular saw. Sebastian runs away, but he’s pretty slow. He makes big motions, but doesn’t travel very far, as if he’s taking really small steps. That makes the chase slow-paced enough for you to think of tricks to pull but fast enough to make you nervous. 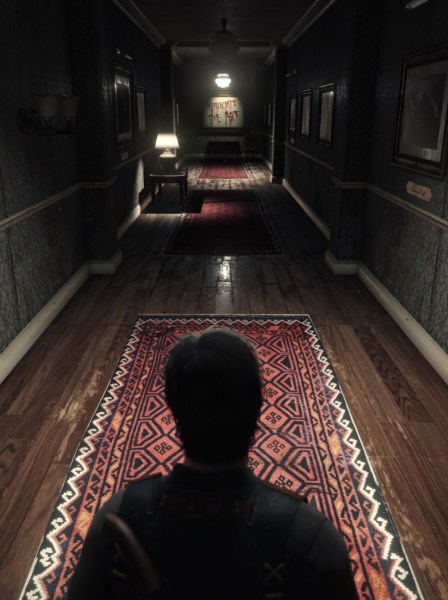 Above: Yep, you’re going to run toward the light, but you’re probably not going to make it there.

Fortunately, it was slow. I screwed up a few times, getting stuck as I was fleeing, and the monster almost killed me. I blew one of my traps, which was a barrel of flammable oil that I could have shot at the right moment. But there were other traps, like a tripwire that the monster broke, which slowed it down. I figured this out and pumped a bunch of shotgun blasts into the beast while it was suspended.

I ran out of shotgun shells, so I switched to the pistol. I was injured and running slow, but fortunately I could shoot the pistol from farther away and do a lot of damage to the thing. Of course, I had no idea how much damage I had to do. But before I ran out of pistol bullets, the thing finally dropped dead. Then I went into the house.

The second video reflects a near-encounter with the villain of the game, a fashion photographer named Stefano Valentini, who is bent on killing and dismembering people. He is a homicidal maniac who delights in viewing himself as an artist. He is fleeing the good guy, pursuing Lily, and leaving traps and clues that show how he’s really toying with Sebastian.

A team of soldiers had already gone into the house to try to get Stefano. One of them was suspended near the ceiling. Another was dying in the middle of the living room. He told Sebastian to go to a device called the Emitter and to turn it up full blast to disrupt Stefano’s power. That was easier said than done.

Stefano left cameras all over the house, trying to show off his art work. Armless mannequins, mysterious paintings, and occasional clues lead Sebastian to an encounter. One wall has a scribbled bloody message that reads, “Appreciate the art.” Sebastian knows that Stefano is playing a game within a game. You have to figure out some puzzles related to the paintings. And if you do so, you can proceed on the story path. You then hear pounding on a door, and you have to open it just to find out what’s going on. When you open it, there’s blood on the door, but nothing else happens. These ordinary things become so spooky, given the scary sounds and music. 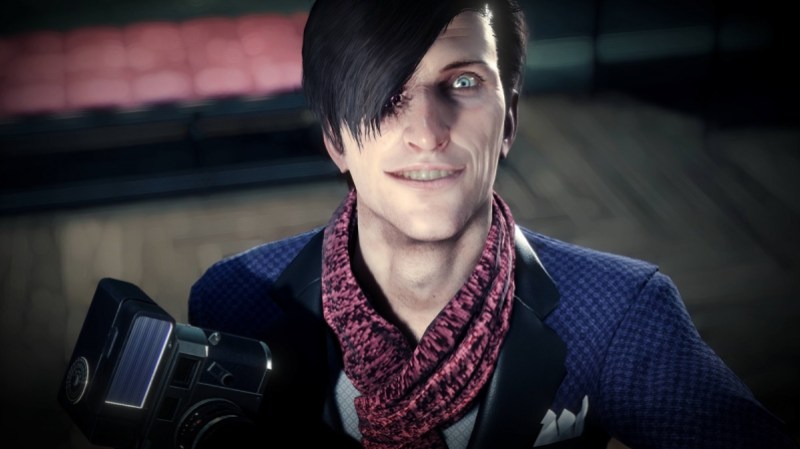 Above: Stefano Valentini is a really annoying villain.

Sebastian ultimately winds up in a room with the Emitter. You turn it on, and it has a timer. Unfortunately, a weird monster (consisting of twisted human body parts) can take a picture of the Emitter and stop the timer. You have to shoot the monster’s camera in order to get the clock going again. Every time you shoot the monster, it makes a strange shrieking, almost orgasmic noise.

It was one of the weirdest boss fights I’ve ever encountered in a game. But it doesn’t surprise me. Whoever comes up with stuff is deranged. And I’m sure that they are very proud of themselves that they can scare me so bad by using all the old tricks in the book.

If you’re squeamish, you better watch out for this one. But if you think you can stomach the gore, The Evil Within 2 will show you just what it takes to do survival horror the right way.