While The Evil Within 2 doesn’t reinvent the survival-horror wheel, it’s a fairly enjoyable experience. Tango Gameworks developed it and The Elder Scrolls V: Skyrim publisher Bethesda is distributing it. It picks up three years after the events of 2014’s The Evil Within and plunges (now retired) detective Sebastian Castellanos into yet another virtual nightmare. This time, he’s searching for his daughter Lily, who was kidnapped and installed as the core.

As in the first game, STEM is the culprit. It’s a system that connects thousands of people’s minds using a core mind (in this case, Lily) to host them. While hooked up to STEM, everyone can live in a simulated town called Union, which is supposed to be a kind of suburban utopia.

It’s a pretty goofy concept. Pretty much the only people who could think this is a good idea is an evil shadow organization bent on taking over the world — in this case, Mobius, the most ineffective yet simultaneously feared organization. The ultimate goal, of course, is to hook everyone in the world up to STEM so that Mobius can control them.

After STEM went haywire in the first game because of a psychopath’s mind turning the virtual world upside down, it’s decided to try again, this time with a “pure” mind aka a child’s. But at the start of The Evil Within 2, Lily’s gone missing within the virtual world and they’ve asked/coerced/threatened Sebastian into plugging in to Union to track her down and rescue her. His main mission is to traverse a world that’s slowly crumbling because it can’t sustain itself without a core mind. If he fails, then everyone who’s connected to the STEM system will die.

Most of Mobius’s operatives in Union are dead. I guess their head honcho never got around to doing a post-mortem on what happened in the previous game at Beacon Hospital or to adding a failsafe for this kind of situation. Suffice it to say, by the time Sebastian gets to Union, it’s overrun with gross creatures.

There’s a semi-open world feel in the first half of the game, and you can choose whether or not to simply go after the main quest or to investigate how everything went to hell (again). As Sebastian shoots, sneaks, and shouts “Lily!” over and over around town, his communicator picks up resonance points, which are signals that usually lead him to areas where something traumatic has happened either to an operative or a Union citizen. These residual memories are pretty cool, though they can be a little repetitive. They flesh out the world, give hints about where you can find weapons stashes, and add some flavor to the pseudo-zombie infestation.

There are also optional side quests. One early on leads you to retrieve sniper rifle parts. Another gives you a chance to save a Union citizen from an untimely death. If you decide to go into the church on a lark, you’ll find a nasty surprise. Though you won’t find anything super shocking on these side quests, it’s nice to have the option to explore more if you feel like it. 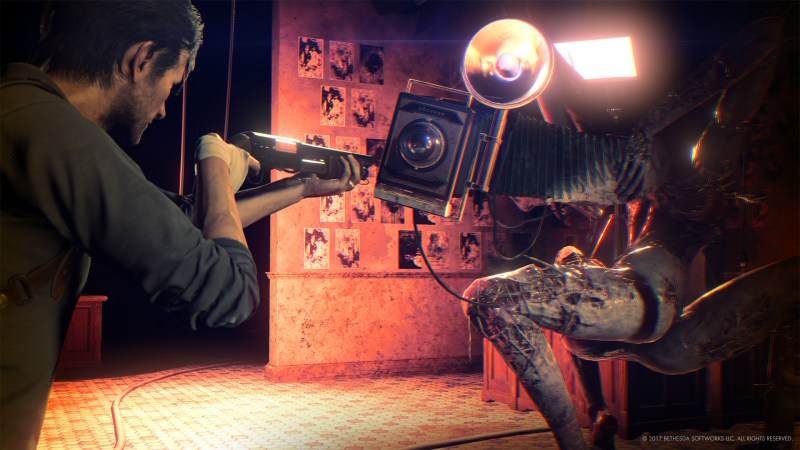 The combat isn’t perfect, but it’s pretty easy to grasp. There’s a system that alerts you to when an enemy has noticed you or is suspicious of the sound you’re making. Resources are slim pickings, so sometimes stealth is the only option. Fortunately, the controls make it fairly easy to duck under cover and you can upgrade how sneaky you are or your stamina bar so you can get out of tricky situations. As in the first game, you collect vials of green gel from downed enemies. You can use these to give yourself a larger stamina bar so you can run for longer or to improve your stealth so that you move quieter. Of course, you can also upgrade your combat abilities (less kickback from shooting, for instance) and to give yourself more health.

Occasionally, The Evil Within 2 railroads you into a fight. This feels cheap since, in other situations, you can usually choose your play style. However, when you do take on enemies, blasting them away with a shotgun is satisfying and smashing their heads open with an ax is hilariously gruesome.

The boss battles feature some gnarly designs and they’re fair. There’s a lot of help from the environment, as the Big Bads were thoughtful enough to scatter ammo and traps around to lend you a hand.

There are some genuinely cool-looking set pieces in the first third of the game as well as toward the end. The first villain you butt heads with is Stefano Valentini, a maniacal artist who’s got a discount Hannibal Lecter thing going on. Though Mads Mikkelsen he ain’t, Tango soaked his levels in surreal imagery, classical music, and upper-crust psychosis. David Lynch’s Twin Peaks clearly influenced The Evil Within 2 with black and white floors and blood-red drapery all over the place.

The requisite sewer level is also pretty neat because you have to don a gas mask, which lends an extra sense of claustrophobia. You also can’t use your firearms because of a gas leak, so stealth is your friend as you avoid enemies, whose screeches, groans, and giggles echo toward you from within grimy tunnels. It builds atmosphere effectively, though I’m not sure why a virtual town would need a sewer system.

Aside from the aforementioned levels, everything else was pretty standard. Union’s kind of boring. I mean, cool, parts of it are breaking off and floating in the sky, but you kind of get used to that after the first few minutes. You’ll also spend some time in the Marrow, which is basically Mobius’ headquarters beneath the town. It just looks like a bunker slash parking garage, really, with some spooky medical equipment.

The second villain in the game is Theodore, and he’s got a sort of Inquisition thing going on with a lot of fire and brimstone, medieval torture implements, and manacles on stone walls. There’s flames everywhere and rivers of blood.

All in all, the levels don’t really change gameplay that much, and they’re not very visually interesting. Add in some backtracking around Union, and it can get a bit tedious. The final villain of the game, which I won’t go into for spoiler reasons, has some cool looks, but it takes a while to get there.

The novelty wears off 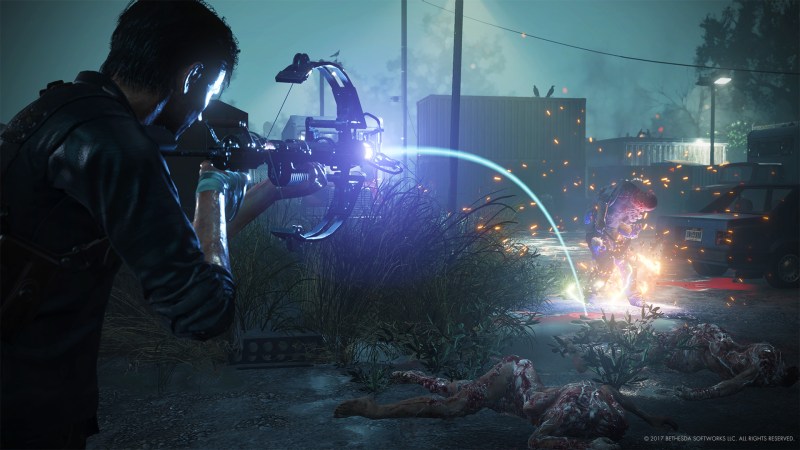 The environment is only part of the tedium. All the side quests kind of amount to the same thing. You don’t really learn that much about Mobius or what they’re doing. I wanted more details about how STEM actually works (though I suspect that’s left vague on purpose) or to learn more about why some of these citizens decide to live in Union instead of the real world. However, most of the residual memories are Mobius operatives going “Oh no, what’s that sound?”

The enemies you encounter are also basically all the same. You get your run-of-the-mill zombos, and then you get your zombos on fire. There are a few specialty enemies, like the knife-wielding Hysteric or the acid-spitting Lament, but it doesn’t really feel like the roster of baddies expands that much throughout the game. Even the bosses don’t feel terribly eventful.

Though the combat feels pretty good in general, Sebastian just doesn’t handle very well. Running feels laborious, and he’s a little cumbersome to control at times. The camera hovers very close to him, and you end up having to maneuver it to get clear visibility, such as when you’re opening a drawer and you want to pick up whatever is inside.

There were also little wonky things that broke immersion. For instance, after I killed something, I could clearly see a vial of green gel lying on the ground. However, the option to pick it up didn’t appear until I moved a foot away from it.

Aside from how awkward some of the interactions were, there also wasn’t enough of it. There were so many doors that Sebastian just flat-out couldn’t open, which felt weird after the game had set up an expectation of allowing the player to explore the environment. For some reason, he can climb on top of a car, but he can’t scale a chainlink fence. And I ran into some invisible walls from time to time, which was disappointing. 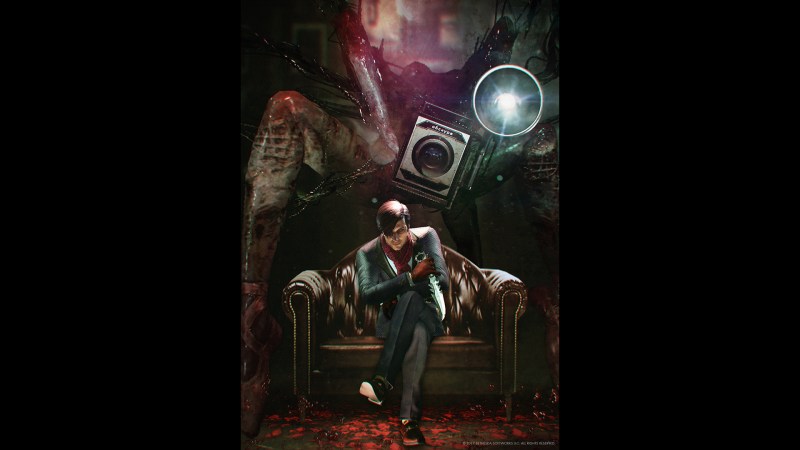 The Evil Within 2 takes itself a little too seriously. It’s the kind of game that wants us to empathize with Sebastian’s guilt and desperation to get his daughter back, and in the next instance it literally compares artistic-murderer/professional misunderstood-emo Stefano to Hitler. I’m also having a hard time getting over a scene where Sebastian fondly remembers a perfect day with his daughter and describes the way her “breath smelled like cotton candy.” It’s just kind of a weird detail?

If you’re a horror buff, you’ll likely be disappointed because there aren’t that many unique monsters in the game. It’s not even scary, to be honest; most of the tension and fear comes from the lack of ammo. All in all, it’s not a bad game, but it’s not a great game either. You’ll probably have fun shooting the zombies and checking out the occasionally cool surreal locales, but that’s it.

The Evil Within 2 is out on PC, Xbox One, and PlayStation 4. The publisher sent us a code for this review.